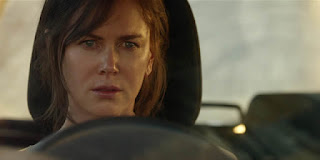 I started wondering fairly early on when this movie transmogrified from a common or garden Irish crime thriller employing the current trope du jour, the discovery from the deep dark past of incest or pedophilia or both. I didn't stay for the Q&A to ask this teaser. I have since been told that although one of the writers has spent much time in Brit TV where they churn out massive amounts of stuff like that, the impetus for the film belongs very much to the director Kim Farrant who has previously made films about some of the tricky subjects that the film goes into. I also wondered about kids lost in the bush movies, the zinger being Picnic at Hanging Rock, not without its parallels, but there are probably a lot - Nic Roeg's Walkabout, John Heyer's Back of Beyond and Rachel Perkins One  Night the Moon spring to mind. A couple of those have elements of Aborginal iconography and a special kind of dread that comes out of the whitefella/blackfella confrontation.

Strangerland lumbers along in the distant footsteps of all those movies. Stolid scene follows stolid scene. I did keep wondering if the two key actors, Nicole Kidman and Joseph Fiennes  may have forced their characters back towards a normality that shouldn't have been allowed. This notwithstanding that Kidman's character gets to the stage where her sanity is out of control and she rips off her clothes and walks naked through the one pharmacy town. What we wanted was more, and more convincing, whacko grand guignol madness induced by dust, heat and sexual guilt. But a first time director working with stars of this magnitude may have had to let things go as the stars sought to appear 'normal'. Sorry to say but disappointing all round and the very muted response in the State suggested that the punters were generally under-impressed.
Posted by Film Alert 101 at 05:20