After one film in which one of the world's great film directors is represented as gauche, ill-mannered and sexually naive, it was easy to move straight on to Abel Ferrara's Pasolini. Sobriety and seriousness reign and, perhaps only marginally, it is more sexually explicit than the Peter Greenaway film notwithstanding that there are no close-ups, or even long shots of penises. You'll have to read the earlier post to know why this is even being mentioned. 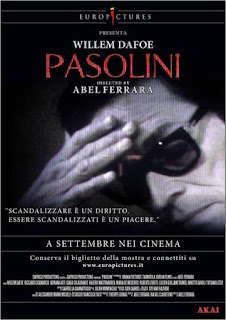 Its hard to believe that the SFF is actually even showing an Abel Ferrara movie, though probably somebody will draw my attention to some previously obscure or overlooked item that makes nonsense of that.  I'd be surprised and let's face it when Ferrara made his rock and roll movies about wild indulgence, gangster behaviour and personal violence the fims were not screened anywhere let alone at the SFF.

If the SFF has stood for anything in recent times its been its tendency to screen the bland and tasteful, the international art house hits screened at or since Venice last year. Ferrara's film was in competition at Venice last year, a turn of events, and a degree of prestige that the director himself might have found amusing. That set of circumstances was enought to get the film programmed into a large cinema at Event which was I suspect less than half full. Even to get there Ferrara had to be very faithful to the story of the great Italian 'writer', very respectful of the place he occupied in society, more than a little deft about Pasolini's politics and I expect quite circumspect where it came to Pasolini's relationships with his dear mother and the actress Laura Betti. As played by Willem Dafoe he is supercool, measured, thoughtful, always in charge. He only takes one mis-step that we see and it costs him his life.  His politics remain just that bit philosophical, reserved and enigmatic.

Pasolini does rather make the Greenaway film look rather like a cartoon. Greenaway may be happy enough with that anyway.
Posted by Film Alert 101 at 07:28