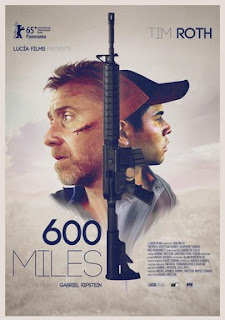 Spoiler Alert. Significant bits of plot given away here.
600 Miles is the director' s first feature film. I am submitting a review on the basis that it may be helpful to prospective viewers going to the festival. Otherwise I would have preferred to have contemplated the film later, possibly and hopefully, to gain a more balanced perspective. I say this because as I left the cinema I overheard a number of viewers, much younger than myself, commenting very favourably on its "edginess" and "roughness" whereas I was with a group of three other viewers, all of similar, middle age, and they all three, were only dissuaded from leaving early, because so doing would have disturbed other patrons unwarrantably.

"Reality" is the sequential occurrence of the events between delineating timeframes. "Drama" is the heightening of reality by rearrangement of time sequences, the editing of events and re-aligning visual and aural stimuli to create a deeper and hopefully more powerful truth. And it is in this particular definition that I find significant problems with the film. Anyone who reads more should note my mea culpa in the immediately preceding paragraph.

The plot initially concerns two young adults, one American and the other Mexican. The Mexican is the conduit from some sort of Mexican cartel which provides money so that the American who is of adult age and without a criminal record can buy large numbers of guns for export back to Mexico, in the face of indifferent and possibly corrupt border officials. Their relationship is at least "curious". By costume and action they are clearly members of the working classes, who engage in a virtually homoerotic competitive relationship, while also engaging in the purchase and export of guns. Of course being a foreigner to the USA, I am quite amazed at the prospect of going into gun shops the size of supermarkets and being able to buy things of such extraordinary lethality. No doubt that passes without muster in the USA! This homoerotic subplot is intensified by seeing the young Mexican use what I think is mascara on his eyes. Ultimately however, whatever the significance, if any, of this is, it is simply left behind.

The balance of this aspect of the film might will be perceived as a policier because the activities of the two are being investigated and observed by Hank (Tim Roth) an official of the Alcohol, Tobacco, Firearms and Explosives (ATF). God knows why that administrative office could possibly be concerned about the export of guns to Mexico when the home country is awash with them anyway – but what would I know? Moving in to arrest at least the American, Hank is overpowered and taken to Mexico by Umberto the quite callow young adult Mexican. Once into Mexico, the two Hank and Umberto, develop something like a relationship so that when Umberto delivers Hank to his "uncle" a cartel boss and receives instructions to kill Hank, instead he kills the uncle.

Discovering this, the cartel intends to eliminate the pair as they race back for the USA. There is a lot of violence. There is also the playing out of a much wider family interaction in which Umberto's own blood family, including his mother, turn against him. This is dealt with quite factually and without specific emphasis and in my view, more's the pity, because this could have been an extremely well-developed subplot. In other words, reality over drama.

Ultimately, at some point in Mexico, presumably the North, and of course in the desert – why is it that Mexico is always portrayed as a desert – Hank instructs the young man to leave the vehicle they are in and he is left, bewildered, by the roadside.

Next scene: Hank is back at home eating breakfast with his girlfriend. End of film. At this point there was a quite noticeable groan from the audience who clearly expected something more, and presumably better.

Those who view the film may therefore engage in their own perspectives on the differences between reality and drama and whether the film succeeds. In my view it doesn't, but it certainly has engaging moments. Considering that my viewing of films to date at the festival has not given me many rewards, I think I was more tolerant of this film than perhaps I ought to be. These are matters of judgement which I can't take any further.


This is a genuine traditional "art film". That means it is cheaply produced and this derogates from its authenticity. As a small example most shots are made at middle-distance and continue rather longer than one's interest can sustain. A shot from the passenger seat of a moving vehicle will show for minutes on end the driver of the vehicle, talking to the notional passenger across from him but there is never a reverse shot to show the passenger speaking to the driver. Examples like this can be multiplied continuously throughout the film. No one could justify this as artistic licence. It is simple economic necessity. Audio can be a bit tricky, especially when trying to listen to Mexican- Spanish accented English.