An invitation to all - The Wintergarden Theatre Rose Bay remembered

Editor's Note: I'm advised that this invitation from the Woollahra City Council is extended to all. You'll need to click on this link  to see a photo of the building and find the location as there was some Google glitch in the document which prevented images being reproduced.


The Mayor of Woollahra, Cr Peter M Cavanagh and Chair of the Woollahra Plaques Advisory Committee, Cr Anthony Marano invite you to attend the unveiling of the plaque outside the former site of the Wintergarden Theatre in New South Head Road to mark the pioneering of “the talkies” in Sydney suburban theatres.
The unveiling of the plaque will be held on Monday 19 March 2018 from 11:00am-12:00pm at 622 New South Head Road Rose Bay.

Light refreshments will be served at Club Rose Bay after the unveiling. 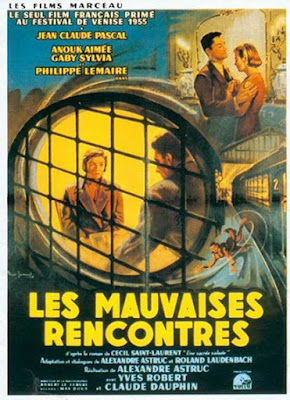 A first ever viewing of a, well backchannels as they say, copy of Alexandre Astruc's Les Mauvaises Rencontres (France, 1955), replete with fanboy subtitles placed over the top of Spanish subtitles was quite a revelation. Astruc's films are mostly hard to find though the French Embassy library had a couple that featured in Barrett Hodsdon's monumental trawl through the history of French cinema via monthly screenings of the WEA Film Group way, way back in the 2000s.

This was a film that passed under the radar on first release. I doubt it had any Australian screenings and Raymond Durgnat, for instance, did not see it in London prior to compiling his "Nouvelle Vague: The First Decade" and as a result made some generalisations about Astruc that don't fit in with this one.

I imagine it was reviewed in Cahiers and Positif but don't have access to either. In Jim Hillier's "Cahiers du Cinéma: The 1950s: Neo-Realism, Hollywood, New Wave" there is a discussion from 1957 involving Andre Bazin, Jacques Doniol-Valcroze, Pierre Kast, Jacques Rivette and Eric Rohmer "Six personages en quête d'auteurs: debat sur le cinéma français" in which Doniol Valcroze says: "Taking a very debatable novel, Une Sacrée Salade, as his source, Astruc has elevated his subject to a kind of personal meditation on youth, on a milieu he knew, on ambition, etc." Right.

Welcome to the cinema of Alexandre Astruc. More please.

Editor's Note: This information comes from a recent post by Bill Mousoulis on his Facebook page. At the foot is a a link to some further thoughts on Bill's inestimable Innersense website devoted to Australian filmmakers.

For me, the discovery of Matthew Victor Pastor and his work in the last few months is like a miracle. Pastor is the most dynamic young filmmaker I've come across in 35 years of indie film watching in Australia. Because it's not about "promise". At the age of 28, he has already delivered 5 features, including 3 that are released simul-taneously this year. He is flying, and, it's so high that it's disturbingly above any "radar" that Australian film culture has in operation at the moment. If the Melbourne International Film Festival do not play one of his new features this year, it will be a crime beyond belief.
Probably the Asian themes and actors will limit his impact in Australia. He will probably leave these shores and go work in the Phillipines permanently and become world-renowned. And yet he's the voice of the "New Australia" - Asian, LGBT, dexterous, vibrant. But Australia is always backward, conservative, and defaults back to "White Australia" mode regularly.
Especially cinematically. Pastor's cinema is a cinema of movement and colour. It's the most dazzling Australian cinema I've seen in a while, only Saidin Salkic and Kim Miles come close to this kind of surreality and intensity in recent years. You need to go back to the '80s to find anything with the same kind of life.
My favourite of Pastor's films is MELODRAMA / RANDOM / MELBOURNE! (click on the second 'here' below for a trailer). It plays with cinematic form in all kinds of ways, with the screen size, with the music, with titles on the screen, and with the narrative of course. For me, this is breathtaking cinema that is just extraordinary. It's one of the best Australian films of this decade.
I wish Pastor well, this year as he releases these films in film festivals and beyond, and also in subsequent years. I wish for him to keep flying, as he currently is. He is a rare bird, so keep your eyes peeled!

You can find trailers to Pastor's recent films if you click here  and here.

Archiving - More trouble at the mill or "how can we do 'less with less'".

“The National Archives of Australia will cut 40 jobs in two years as the institution that describes itself as "Australia's memory" looks for savings amid budgetary pressures.”

That’s the opening para from this Canberra Times piece published on 21 February. The Times is now about the only paper that carries any coverage of public sector and public service issues. You can only hope that someone there will be keeping an eye on the issues raised. History however tells us that almost any issue dies pretty quickly as a matter of public controversy or even interest.

What might be overlooked, even in the article linked above, with all the focus on the NFSA, details of which can found here and on the links therein, is that there are other repositories of film that are likely to be facing demands for reduction of activities not agreement about the provision of additional funds.

The National Archives of Australia holds all of the output, sound and vision, of the ABC and SBS as well as of other Federal government film production. The Australian War Memorial and the Aboriginal and Torres Strait Islanders institute also have substantial holdings. Threats to preservation, conservation, digitisation and access loom large and across the board. The Canberra Times report on the National Archives gives some pause for thought. What is the implication of the Director-General's statement quoted by the Times in which he says: "As I have often said, it is only because our budget is being reduced that we must look constantly across the services we provide and ask how we can do 'less with less'.

But, we should be warned. As Peter Galvin said about the NFSA, and it applies to some at least of the others, in the post linked above

(2) No one understands its value

(4) Its curatorial powers are so limited.

Over the years they have produced many exhibitions - there's a good one now! - and many videos. But its purpose is felt deepest by historians/academics/filmmakers/researchers...and this, for Canberra is too small a club to pay attention too!”
Posted by Film Alert 101 at 23:25 1 comment: