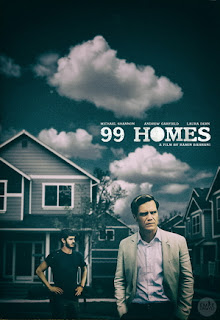 Ramin Bahrani may well be the best film-maker brought to the Sydney Film Festival in its most recent decade. I'm struggling to think of anybody else who, over recent years has made a better set of films at this stage of his career. And that's without seeing his 2012 film At Any Price  which seems to have been by passed by everyone. But with Man Push Cart, Chop Shop, Goodbye Solo and now 99 Homes we have a before us an early career film-maker who has hit the mark every time, at least that I've seen.

Bahrani tells stories of the modern American cities usually focusing on someone operating just outside the American dream - a jolly cab driver, a guy operating  a food stand, a kid hanging round a dodgy car body repair shop, a foreclosure victm - the underclass who struggle day to day. But he has an enormous reservoir of goodwill towards all of them and you get the impression that there is a deeply felt lived experience that Bahrani is trying to put on the screen.

99 Homes could have been taken from the inside pages of the Wall St Journal. On several occasions we get a quick explanation of just how the system works - the legalities of court appearances where decisions take sixty seconds to make, the re-imbursements for stolen goods, the machinations in signing away properties for a pittance. There is a slow burn about this. Your seething anger starts early and keeps going. It is quite the opposite, however to the odd description in the festival catalog of the film as "adrenaline-charged", One element that does assist the general sense of unease and corporate criminal sleaze is the music by Australians Antony Partos and Matteo Zingales.

Relentlessly Rick Carver (Michael Shannon) ploughs through the detritus of a world made up of people who cant make their payments and people who work for pitiful amounts of cash who throw them out of their houses. He has, he explains bigger things in mind, consolidating all those properties into a portfolio that will eventually pay off big time. The Clinton/Bush/Obama years in America have been very good for those prepared to take a sharp not always totally legal opportunity. Carver is living in luxury and in one scene the usual accompaniments to it are on display - sex drugs, rock and roll. Nash (Andrew Garfield) tumbles into this world and as much as he's appalled he turns out to be rather good at maximising benefits. His crisis of conscience is effective and the ending rings somehow very true, notwithstanding the enigmatic final words.

The film has one more screening over at Cremorne. It surelyshould have a bit of commercial life after the festival as well.
Posted by Film Alert 101 at 17:04