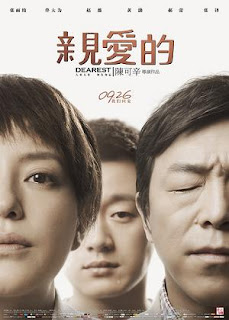 Peter Ho-sun Chan is one of those, at least here, under the radar names in Chinese cinema whose more than a dozen films bespeak a career devoted to quality film-making. He's not unknown. David Bordwell's "Planet Hong Kong" has plenty of references to him and a couple of years ago he had a major hit with the martial arts movie Wu Xia/Dragon. It appears that only his his 2006 Perhaps Love has had an SFF screening. Time for a retro but dont bet on it happening anywhere near here.

Child kidnapping has been the subject of another recent Chinese movie Lost and Love written and directed by novelist and television screenwriter Peng Sanyuan in her directorial debut and starring Andy Lau. That film has already been through the commercial multiplexes here. Now we have Peter Ho-sun Chan's newest film Dearest which takes a long, sinuous completely chronological take on the subject of stolen kids, parental love, the bond between kids and adults and the Chinese legal system. Not until in the end does all hell break loose and tears flow and that's actually after the real movie has finished and we're into some making of pictures.

It is as near to a perfectly told story as we're likely to get in the next week or so. Best of all is that it unfolds in surprising ways, not least when half-way through a new character is introduced and the second half of the film takes her viewpoint as she flails away at the legal system and is forced into a range of demeaning activities (no spoilers this time because I hope you go see for yourself) to keep her quest to reclaim at least one of her 'children'.

Completely involving and played by Zhao Wei as Li Hong Qin, the character who only appears at the half-way mark,  Huang Bo and Tong Dawei , with absolute authenticity its the film to see so far. Regrettably its screenings have already been and gone. Yesterday in Event 9 a less than half-full house did clap and cheer. That's good even as you wonder how it is that 100,000 oriental faces pass the Event Cinemas each day yet so few were inside for this wonderful movie.
Posted by Film Alert 101 at 16:48