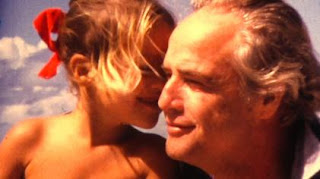 You’ve got to wonder about suddenly having two major documentaries about Marlon Brando, Phillippe Kohly’s great MARLON BRANDO AN ACTOR NAMED DESIRE from last year and this new film from Stevan Riley.

If they didn’t use the same clips from STREET CAR and WATERFRONT, you’d be
tempted to think the pair were about two different people. Riley’s film omits Rita
Moreno, Movita and Elia Kazan (glimpsed on the edge of a photo), Brando's mother’s theatre work and the actor’s Paris time. Both films leave out sister Jocelyn.

What gives LISTEN TO ME MARLON it’s character and it’s advantage is the use of a family archive of years of audio tapes in which the actor attempted self analysis along with the eerie death mask-like digitization’s of his face, mainly reading Shakespeare. Coupled with the events described they produce something quite haunting.

The focus here keeps on shifting - the childhood antagonism with Brando’s father,  his mother’s drinking, his contact with Stella Adler (her brother Luther is also on the edge of one of those photos) and searching for “realism”, his contempt for traditional star acting in a montage which builds to Rita Hayworth ranting in GILDA, coming on for glamorous interviewers, success with him dismissive of ON THE WATERFRONT, (“there is no such thing as a great movie”) his absorption with issues - black power and indigenous rights, which includes footage of the Native American girl sent in to nervously refuse his Oscar, disputes with  Coppola on GODFATHER and APOCALYPSE NOW and with Bertolucci over autobiographical elements introduced into  LAST TANGO.

Brando came to think of acting as “lying for a living.” but in there we do get the expected insights - working with disabled veterans for THE MEN (“physicality is a tough thing”) or  “it’s hard to do nothing” revealing over the GODFATHER clip. Glimpses of his performances in pot boilers include a snatch of CANDY, which makes him ask “How could you do that to yourself? Haven’t you got any fucking pride?” He’s actually very funny in the part. Finally we see him getting prompted in his lines through a hearing aid for THE FORMULA and his next eight films don’t figure in this movie.

Of course the only reason we are getting two major documentaries about Brando, eleven years after the actor’s death, is his acting. His inability to make extraordinary talent and success bring him satisfaction is powerful stuff and both films about him attempt to come to terms with that.

LISTEN TO ME MARLON is sucked into Brando’s self assessment, his belief that the most important thing is his family life in Tahiti including the MUTINY ON THE BOUNTY fiasco, which triggers a monologue on the untrustworthiness of directors.  We get intruding coverage of  the murder of his daughter’s fiancé, for which his son was jailed. The daughter’s later suicide is made even more poignant by seeing her beaming in sunny child hood home movies. Reality consuming Marlon Brando’s life of privileged self scrutiny is their big finale.

LISTEN TO ME MARLON is disturbing.  It shows Brando’s achievements, which I, and a large part of my generation, found enriching our lives, did not prevent him being reduced to a  lost and tragic figure. We are left wondering what conclusion the makers drew from this.