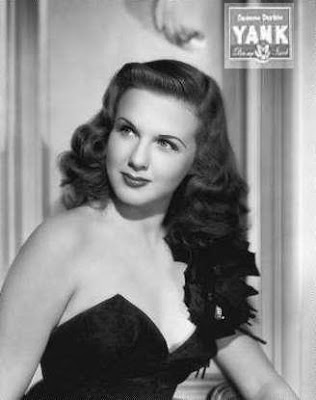 Deanna Durbin, one of the most charming film personalities ever to grace the silver screen, died four year ago at the age of 91.

I well remember my mother taking me to the Tivoli theatre in Brisbane when I was about 11 years old to see His Butler's Sister (1943). It was directed by Frank Borzage, a great Hollywood director from the silent era onwards, who specialized in many (deservedly) highly acclaimed romantic comedies and melodramas. I was entirely captivated by the charm and vivacity of Ms Durbin then, and have in my adult life made a point of chasing up all of her 21 or so films. They vary in quality, but the best of them have aged remarkably well, especially First Love (Henry Koster, 1939), Three Smart Girls Grow Up (Koster, 1939), and a charming noir spoof, Lady on a Train (1945), directed by her husband Charles David. She also played , very creditably, a serious role in Robert Siodmak's important film noir Christmas Holiday (1944), opposite Gene Kelly in an uncharacteristically unsympathetic part. It was based on Somerset Maugham material. She retired in 1949, left Hollywood, and insisted on her privacy for the rest of her life. She single-handedly saved Universal studios from bankruptcy in the 1930s.  Deanna-you were always much more interesting than you were ever given credit for. 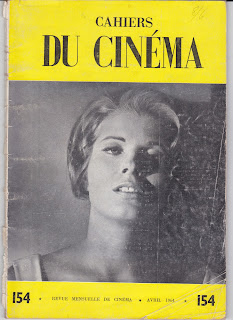 Álex de la Iglesia has for years now been the most conspicuous contributor to Hispanic film, though critics cling to Pedro Almodovar like a life raft. I noticed the outrage when de la Iglesia's splendid Balada triste de trompeta/The Last Circus carried off a major 2010 festival prize and the approval of Quentin Tarantino.   Any of his films is an event and the new El bar/The Bar is instantly recognisable. 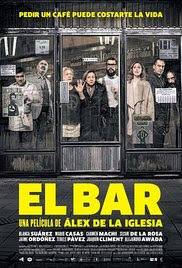 The single take opening picks up the cell ‘phone conversations of Blanca Suárez (the daughter in Almodovar’s  La piel que habito/The Skin I Live In),  discussing her blind dates where they send ring-in ‘photos, criss-crossing those of the de la Iglesia regulars on the footpath, Hill Street Blues style, until they all converge on Terele Pávez’ small cafe bar. Gormless Secun de la Rosa is the handy man and Carmen Machi (also great in Vilaviciosi de la lado) is playing the slot machine. Bearded Mario Casa (Witching and Bitching) is working on his lap top making him the only one who doesn’t pay attention to trim Señorita Suárez.

A junkie stumbles in to use the loo and religious nutter Jaime Ordóñez generates confusion till Pavez calms him down. De la Iglesia grotesques are accumulating.

At this point one of the businessmen customers leaves and a shot is heard. Through the window the cafe group see his body on the street. Only the road worker in his fluoro jacket goes out to help (downwards angle - we know what that means). Confusion and terror inside. Yes they are in the middle of one of those sinister government cover-ups.

Trying to figure it out, the retired cop produces his pistol and demands to see the contents of one man’s attaché case which proves to be his lingerie salesman samples. The junkie stumbles out looking like the exploding man from Monty Python’s Meaning of Life. The barflies' attempts to survive prove counterproductive - and generate an unpredictable plot line.

The characters each get their revealing scene, self-sacrifice and self-interest on display until the one traumatized survivor makes it out of the street grating behind all the policia activity.

The de la Iglesia grotesque comedy and striking imagery are back - the dead man's blood picking out a square pattern in the tiled street, disgusting, gaunt Ordóñez is skinny enough to be pushed through the escape hole greased with cooking oil, a corpse bleeds out of its ears. Carmen Machi's jackpot winnings get used as coins on the dead man's eyes and her burned hands are dressed with toilet paper from the cellar where they survive on Cola and crisps

However de la Iglesia is trying to work variations on his usual product - confined location and time span here, with a finale under the streets rather than in the usual perilous high place. The appealing Suarez stays immaculate, like Tony Curtis in The Great Race pie fight, only to get the full grime and grease treatment. She plays straight faced, unlike the self-satirising Carolina Bang who has been fronting her husband's movies.

Craftsmanship, pacing and performances are spot on but the mix of yuck elements and gags is losing contact with our concerns, despite references to Ebola and financial meltdown but what the heck? It's a new Alex de la Iglesia. It's still going to be better than ninety percent of the material in the film festivals that ignore him.

One liners - From FINDERS KEEPERS and THE PRINCESS COMES ACROSS

This little contribution started off this series. I haven't been flooded with entries but the idea is to send in the best one-liners appearing in the most unlikely films. 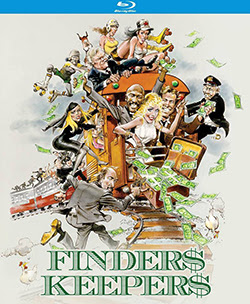 Then I recently came across this, the final line, from William K Howard's 1936 romantic comedy with Carole Lombard and Fred MacMurray The Princess Comes Across.

"No good ever came out of a concertina". 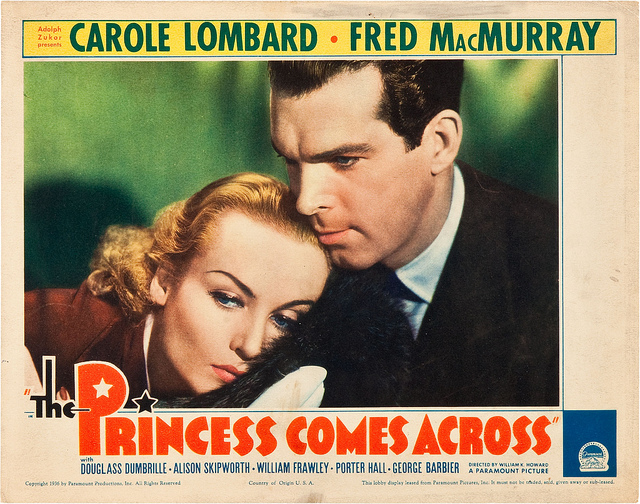 Sirk in Germany: Weimar theatre and Nazi cinema
Born in Germany in 1897 of Danish parents Douglas Sirk (Detlef Sierck) received a classical education in Copenhagen and studied law, philosophy and the history of art in Germany after World War I. He became a theatre director in 1922 when in his mid-twenties, directing audacious modern plays  by leftist authors including Brecht, Georg Kaiser and Friedrich Wolf  but also plays by their political adversaries and plays by Shakespeare (in his own translations), Sophocles, Strindberg, Ibsen, Shaw and Goethe. After taking up a position in Leipzig Sierck encountered a more difficult political atmosphere with Nazi brown shirts outside the theatre and in the audience for the premiere of an opera by Kurt Weill and Georg Kaiser which was cancelled after the Nazis won the national elections in March 1933. He began to direct a repertoire dictated by the Nazis. In 1934 with his choice and direction of modernist plays increasingly attracting unfavourable attention, Sierck joined Ufa, Germany's largest film company, the film industry being less rigidly controlled than the theatre. 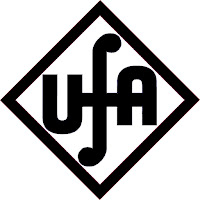 From 1935-37 Sierck directed eight features including Stutzen der Gesellschaft/Pillars Of Society (1935) based on an Ibsen play which is regarded as one of the best literary adaptations of the period in Germany. Schlussakkord/Final Chord (1936) is a melodrama Sirk regarded as important because it was the first film in which he fully engaged with cinema in realising that “motion is emotion,” casting off his literary and theatrical background in writing the screenplay and directing with stylish bravura, returning to his early impressions of cinema as a child. It includes a wealth of musical material including large sections of a concert performance of Beethoven's Ninth and won the prize for best musical film at the Venice Biennale. Zu neuen Ufern/To New Shores and La Habanera (1937) established the Swedish actress Zarah Leander as Germany's new star to replace Garbo and Dietrich. Set in Australia with an anti-colonial theme, Ufern has been described by Jon Halliday as “stylistically one of the most extraordinary films ever – not just in the combination of music, songs and dialogue in the tradition of Brecht and Weill but in the assemblage of contrasts, of light, of class, of geography”.  It was received with great acclaim at its premiere in Berlin. 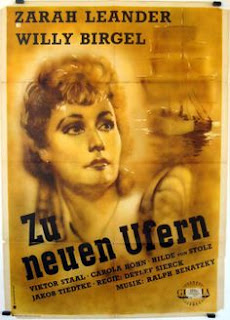 Both films, surprisingly tough politically, were shot in an 'exotic' style comparable to that of Josef von Sternberg. Like Ufern, La Habanera is a melodrama with music integrated into the narrative, set in Puerto Rico (but filmed in Spain) with an anti-capitalist theme. Sierck was not allowed to make Pylon or The Shooting Party at Ufa because they were considered too pessimistic, not what was wanted. He subsequently made both into films in America. Nevertheless Sirk said that he “learned a lot at Ufa” and always concerned himself fully with the technical aspects of the craft so that he “rarely looked through the camera” and he could tell the cameraman exactly what lens he wanted to use because he could judge exactly the distance and adjustment for movement (interview with Michael Stern).  See also Critical Backlash – Part 10 for further discussion of Sierck and Nazi cinema.

Sierck's first wife, Lydia Brinken, became a Nazi. They were divorced and Sierck lost access to his son whom he never saw again except on the screen – Klaus-Detlef Sierck became Germany's leading child actor and a member of the Hitler Youth. When Ufa came directly under state ownership in 1937 the atmosphere became increasingly repressive and Sierck left Germany in December 1938 and joined his wife, Jewish actress Hildegarde Jary, who had left earlier. He began a long search for work, initially with limited success in France and Holland, ultimately arriving in Hollywood at the end of 1939 on an invitation from Warner Bros.  The studio soon terminated his contract and for a time Sierck and his wife ran a chicken farm they established in the San Fernando Valley and later an alfalfa farm. Sierk was acquainted with the Hollywood colony of German exiles including Thomas Mann, Max Reinhardt, Fritz Lang and Ernst Lubitsch but disliked their almost obsessive contempt for most things American, preferring the company of “ordinary Americans” who treated the Siercks with “simple creative generosity.” There was also suspicion in the exile community because of the eight features he made in Nazi Germany and of his late emigration. See also Critical Backlash – Part 10.

Sirk in America ((key films in italics))
'The independent years 1943-50: 6 indie features plus 2 features assigned under contract at Columbia
Assignments at Universal  1951-2: 7 features
The Universal years 1953-9 with Ross Hunter and Albert Zugsmith: 14 features (10 produced by RH, 2 by AZ)
The 'European' films: Summer Storm, A Scandal in Paris, Lured, A Time to Love and a Time to Die
Religious themes: The First Legion, Thunder on the Hill, Sign of the Pagan, Battle Hymn
The 'uncomfortable comedies' at Universal:  The Lady Pays Off, Weekend with Father, No Room for the Groom
Americana: Meet Me at the Fair, Take Me to Town,
The 'melodramas': All I Desire, Magnificent Obsession, All That Heaven Allows, There's Always Tomorrow, Written on the Wind, Interlude, The Tarnished Angels, Imitation of Life


Other: Hitler's Madman, Sleep My Love, Slightly French, Shockproof, Has Anybody Seen My Gal?, Mystery Submarine, Taza Son of Cochise, Captain Lightfoot.
Posted by Film Alert 101 at 20:18 No comments: