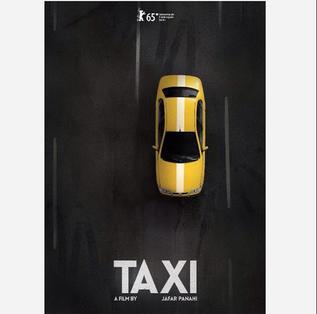 While apparently living under house arrest, having been sentenced to sort of twenty year incarceration for his support of the opposition at the last Iranian elections, Jafar Panahi has taken on a new role as the smiling eminence who, in modest ways, runs rings around the authorities. Officially prevented from making films, he has now made what may be called The Incarceration Trilogy, all of them featuring himself as a gently quizzical, occasionally beaming, gadfly. They are so gentle and in some senses inconsequential but they add up to an almighty provocation which clearly the lumbering powers that be seem unable to quell or quench. Bravo. Iranian film-making offers one of those pressure valve openings that cause you to have some hope that the whole religious authoritarian structure will crumble soon, not just inevitably.

Taxi (that's what is the film's sole credit says) features Panahi himself driving a cab round the streets of Tehran. He doesn't exactly know locations and there are grim moments indeed when he he doesn't actually know where things like hospitals are. This is of course carefully staged to look as if it is completely spontaneous. The half dozen encounters run us through some of the day to day things that trouble minds - whether to hang certain offenders, how to get a couple of old dears to their destination and a long chat with a precocious child. The ending is a ripping moment as well.

Given that the world has tenaciously clung to Panahi via these movies, it would be nice if the Competition Jury cocked another snoot at those that seek to oppress artists by giving the film the prize. The way Jafar makes movies these days the $62k would probably be enough for him to turn his trilogy into a quartet. Or it may help the authorities give up on the whole ridiculously punitive exercise.
Posted by Film Alert 101 at 19:28