The section devoted to Japanese color features kicked off with Jigokumon/ Gate of Hell, (Kinugasa Teinosuke, Japan, 1953) a film available from both Masters of Cinema and Criterion. No big deal or rarity status attached to that one. Next in line Hana No Naka Musumetachi /Girls in the Orchard (Yamamoto Kajiro, Japan, 1953). Now it’s fair to say there was some polite applause and a few people used words like ‘sweet’ about this plodding piece of old-fashioned Japanese sexism. Older sister has escaped the family orchard to work as  a maid in a Tokyo hotel. Younger sister is envious and wants to swap places. A somewhat gormless local boy who has grown up with these young women wants to marry the older one but she’s not interested. She has attracted the attention of the hotel’s handyman/electrician but he’s complicating matters and forcing the issue because he’s been offered a well paid job in Okinawa and wants to leave, with the sister, straightaway.  This is old fashioned and very tendentious stuff about the place of women in Society, their need to make sacrifices for family ‘good’ and how the dullard male triumphs. Selected by Alexander Jacoby and Johan Nordstrom this caused one observer to suggest the selection was shall we say disappointing or to quote: “Those guys should be shot!”. To add to all this, the film looked like some North Korean propaganda piece with its red-cheeked women and its ponderous exposition. As another scribe said, it made you keep thinking that Ozu would never have allowed this family drama to wallow along in such a fashion. The director ? Yamamoto was allegedly a mentor of Kurosawa Akira’s. The great man sailed way past this level of story telling very early on. One final question asked is why the similarly themed but far livelier, more complex and more ‘modern’. Karmen Comes Home was overlooked the selection in favour of this one. 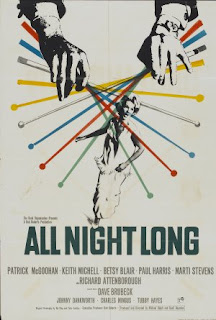 All Night Long (Basil Dearden, UK, 1962) is not the most obvious candidate for inclusion in a high art film festival like Il Cinema Ritrovato. Then again nor is The Heroes of Telemark (Anthony Mann, UK, 1966) which went on in front of a packed house at the very same time. All Night Long is part of the selection of Jazz on Film chosen by  Ehsan Khoshbakht and Jonathan Rosenbaum. The selection does not include Rolf De Heer’s Dingo (Australia, 1991).Nor does it include another film with a Dave Brubeck improvised score, Ordeal by Innocence (Desmond Davis, UK, 1984) a glorious artefact from the days of Cannon Films. Sorry I’m trying to show off but starting from a low point of knowledge.

All Night Long  was preceded by four short films  most notably including Black and Tan Fantasy (Dudley Murphy, USA, 1929), a 19 minute little drama featuring  Duke Ellington and his band and some sort of representation of The Cotton Club, where Duke was the star attraction of the day. The action gets through several numbers and a couple of remarkable dance acts including one by five black brothers working in extremely tight formation.


But All Night Long features a bunch of Brits all doing American accents in a vaiant of Othello. It all takes place in a warehouse where a bunch of jazz musos are assembled to celebrate the first wedding anniversary of Aurelius Rex (Paul Harris, that is another Paul Harris), superstar black muso to Delia Laine (Marti Stevens, whomever she is or was), who sings like Cleo and  whose voice  when she sings is I suspect a dub by Cleo. Over the course of the evening the evil Johnny Cousins/Iago (one of the great Irish actors, Patrick McGoohan, tries to prise the racially mixed couple apart so that Delia will resume her singing career. It’s all preposterous but the music is integrated ito the story with a fine touch. Mise-en-scene is everything and Dearden does it all well. The crowd clapped and cheered....
Posted by Film Alert 101 at 22:23