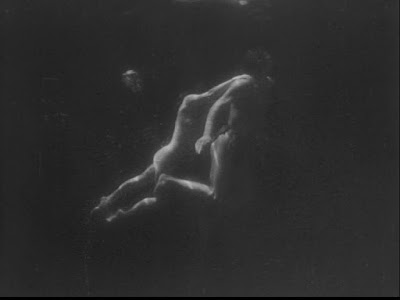 The movie paradise that is Tarzan and his Mate, released in 1934 after much to-ing and fro-ing between directors Cedric Gibbons, Jack Conway and James McKay, who is credited as "animal director" but whom Maureen O'Sullivan recalled as the major physical director on set. Click on any image for a slideshow.
Still, so much of the picture belongs to GIbbons, with extraordinarily beautiful art direction that embodies in a sublime way the very best precode Metro, (on the cusp of the repulsive Louis B) in brilliant comparison to its key inspiration at RKO, in the 1933 King Kong, and the visual "primitive" world of co-director Merian Cooper with Willis O'Brien. 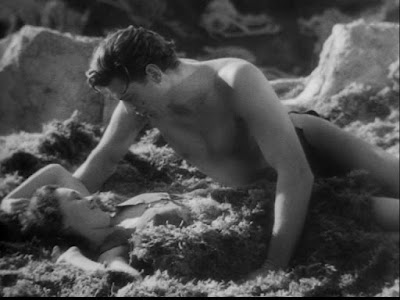 Gibbons' mise-en scene in Tarzan is in fact incomparable, and ably heightened by the ample Code-baiting nudity.
Gibbons creates incredible artifice all through the picture including papier mache tusks and skeletons that define the Elephant burial ground which is the spiritual home of the story, with rear projection and mattes filling in layers of delirious dream landscape in which the actors are enhanced to mythic visual status.
Best of all a world just before the Production Code stomped all over Hollywood and sex which in its rawest, uncompromising state was here celebrated in a picture enjoyed by men, women and children through a post Freudian fantasy in which nature and humanity at its best meet in flawless harmony. 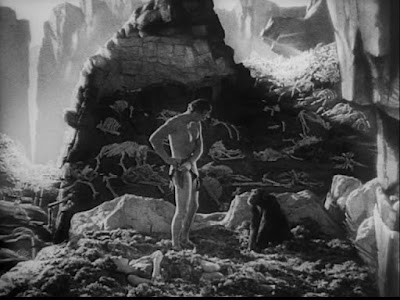 It's a real joy to watch this stuff again when the world around you is getting uglier than usual. The screens are from the old six picture Warner DVD compilation.
Posted by Film Alert 101 at 16:11