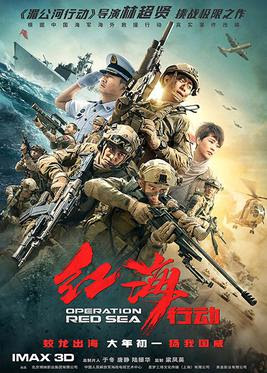 Dante Lam’s Hong hai xing dong/Operation Red Sea arrives in the wake of  the Jacky Wu Wolf Warrior films but it’s not the same fun. This one is also an enunciation of the don’t mess with China message. It’s spun off the same incident as Wolf Warrior 2, with the Chinese military evacuating its nationals during the civil war in Yemen, here become the fictional Yewaire.  The titles even have a ‘phone number for menaced overseas Chinese to call.

Yi Zhang’s straight-faced lot in flak jackets merge into one grim military who are not only less endearing than Jacky Wu but less effective, their bus load of refugees being reduced to mincemeat in one of the film’s characteristically blood thirsty scenes.

The film’s racial spectrum is different too. There are no Europeans, outside of an Amitabh Bachchan imitator munitions dealer, and the bad guys are all head scarf Arabs fronted by a sadistic Mullah. Well, we are all down with that - right?

Here the Navy special forces lot warm up taking out Somali pirates who have captured a merchant ship – slo-mo sniper bullets hitting the nasties despite their hostages and a chase after their captain escaping in a speeding launch headed back into protected Somali waters, tracked on the navy’s hi-tech radar, before they ride the amphibian into the drive-on mouth of the carrier.

The film pauses long enough to set up minimal characterisations - lone wolf sniper, resolute officer, single female marksman who we lose track of till she picks up the surface to air missile the other lot have left lying about - and then it’s off to Yewaire.

A Chinese lady journalist who is over-confident about her English is meanwhile trying to track down a load of yellowcake that the munitions dealer wants to flog for use in dirty bomb manufacture.

This personal stuff is just a dressing on the surface of the film’s real purpose - showing off all the military hardware this lot have or improvise with in the film’s successive, inter-changeable action set pieces - and impressive they are. The glider suits dropping out of the sky, hapless locals driving car bombs (think Hurt Locker), blowing the tread off the other lot’s tanks, spotting the scar faced shooter (American Sniper), battles shown in three second cuts, the tank gun shell with its shockwave cutting through successive clay brick pillars, the armed drone racing to the rescue (yeah!) or bringing naval guns to bear on the shore artillery. After two hours twenty the front rows needed therapy for shell shock.

The motivation is a nice parade on the flight deck of the spotless carrier and a bit of “We are fighting for better lives” dialogue. The capacity audience (at three on a weekday afternoon!) several times broke out in spontaneous applause. There’s no doubt that this is one of the loudest, bloodiest, best-crafted films ever. The $72 million budget is expanded by the team’s knowhow and the fact that they are not getting paid anywhere near the money a Hollywood crew would earn.

Influence of recent American movies may be obvious - add Blackhawk Down, Saving Private Ryan and all Gene Hackman’s ventures behind enemy lines.

These movie rounds of applause for the military planting the standard among the heathen are a pretty much unbroken line in film history - Maurice Elvey’s The Flag Lieutenant, Duvivier’s La Bandera, Hathaway’s The Real Glory, Charles Chauvel’s 40,000 Horsemen, Tay Garnet’s Bataan, all Raoul Walsh’s marine sagas or his Battle Cry, Lang's An America Guerrilla in the Phillipines, Andrew Marton’s  The Thin Red Line and the rest.

Personally I value these less than the uneven Lewis Milestone accounts of WW2, in particular Edge of Darkness, A Walk in the Sun and Halls of Montezuma. What stays with me from those films is not the death dealing machinery (though the amphibious landing in Halls is a great set piece) but the way they pivot on the stress placed on recognisably normal people - not stony featured warriors.

While I wait for Jackie Wu’s Wolf Warrior III with anticipation of a fun night at the movies, I don’t feel the urge to track down director Dante Lam’s Mei Gong he xing dong/Operation Mekong said to be the prototype of this new movie.
Posted by Film Alert 101 at 03:44