In a so far generally lacklustre French film event, it’s nice to find a couple of genuinely
agreeable titles.

Le Retour du heros/Return of the Hero (Laurent Tirard, France, 2018) is a handsomely filmed comedy-action-costume
piece which foregrounds the Gable-Lombard combination of macho Hussar Jean
Dujardin and mocking Twenty-first century attituded Melanie Laurent. Director Grégoire
Vigneron’s best work to date is his Moliére biography and this places the pair in that
world.

Captain Dujardin, pounding up the driveway on horseback towards camera in his hussar uniform, is the commanding presence needed to win the hand of Laurent’s younger sister Noémie Merlant and, having gained this and promised to write every day, he goes off to battle. He is never heard from again. Distraught Merlant catches a fever (single shot of her walking in the field in the rain) and looks like succumbing till Melanie restores her hopes with fake letter from her fiancée describing his passion for her, his heroic exploits - and his elephant farm.

The business of sustaining a fiction to save a seriously ill character curiously also drives
the Kad Merad L’Italien which SBS gave a noon run last week. (Keep the good stuff
away from times where people might watch them fellas!) Both films do an impressive
shift from passable comedy to disturbing seriousness and the comparison suggests an
underlying Maltese Falcon film form.

So that Merlant can pair with more suitable suitor young Christophe Montenez, Laurent
disposes of  Dujardin (“Il n’y a plus de Capitaine”) with a drop of her own blood on the
last fake letter. The locals are so impressed that they raise a memorial to the deceased
hero.

However, (1812) in town the passengers pile from the relais complaining about the smell
and out comes the grubby traveler that proves to be a gray-streak bearded Jean given to
spitting on babies. No Martin Guerre here. Melanie’s fictions are imperiled. She has to
show him the memorial and give him a bribe bargained up to hundred crowns to get back
into the coach, though the passengers protest. “This man has paid for his seat” she asserts.

However instead of vanishing discreetly, we get another shot of uniformed Dujardin
pounding up the same drive. Stuck with this, Melanie has to rehearse him in the character
she has created, with Jean adjusting the wording in the letters to his own taste. He gets to
push her in the river twice and declaim his adventures including a diamond mine, which
the local dignitaries flock to invest in, while their wives turn up clothes disturbed in the
adjacent rooms during his performance.

Melanie has had enough of this and pens another letter which indicates that he has made
advances to Merlant (willing) again, meaning that outraged Montenez, who happens to be
a crack shot, challenges Jean to a duel - the weakest scene in the film with Dujardin
mugging the choice of weapons at length till Merlant shows up and Dujardin, knowing
her preferences, has her husband slap her into submission guaranteeing a happy union.
Melanie, watching through the trees, is thwarted.

However General Fyodor Atkine’s forces are billeted nearby and Melanie’s plotting is
likely to get Jean shot as a deserter. The film does its tonal switch with a dinner with
Atkine who demands to hear about the bloody battle of Jean’s unit, generating the
alarming carnage monologue, riveting all.

Cossacks (where did they come from?) appear and we get a great scene where, with no
idea how to arrange the defense of the home, Jean steps out (“I didn’t plan on dying
today”) with the single shot muzzle loader facing the charging horsemen. I defy anyone
not to cheer.

The ending is nicely cynical. Expertly judged and elegantly mounted in the tradition of
the best French costume movies. Le Retour du heros  showcases its stars splendidly and
carries along an audience. There’s a vague feeling that it lacks substance but what the
heck? 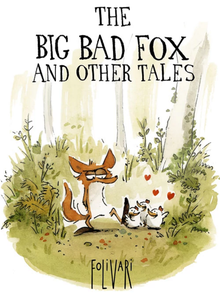 The broken line, water coloured texture is recog-nizably that of the makers. I was totally won over despite the fact that I was about three foot taller than the intended audience.

Possibly based on the model of the Michel Ocelot's Ivan Tsarevitch et la princesse change ante, it is one of three stories framed here, not by a recording studio but by a red curtain that opens to show the characters still setting up the action behind it, with  their fox character acting as MC, before we get into the farm yard setting.

In the "Bébé a livre" episode, the exasperated pig has to ride herd on his colleagues the fox and the duck, who find themselves completing a baby delivery run that the Stork has
surrendered. They commandeer a truck, run into silhouette hunters using tranquilizer
darts and pack the kid into a post office box -which gets flung out of an airplane before
the required heart-warming ending - retrieval from a granny lady for the intended parents.

The continuing characters are endearing but the minimally detailed baby in a blanket
manages to register nicely too.

"Le Grand méchant renard" is more elaborate and even better with the fox unable to
manage making off with the aggro hen from the roost. The wolf (a brother in animation to
the one in  Jan Lachauer & Jakob Schuh’s splendid 2017 Oscar candidate Revolting
Rhymes) suggests that Fox lower his expectations and steal her eggs. Problems when the
chicks hatch and identify with Fox as their mum, leaving him with a diet of turnips and
having to stage a fake fight with the wolf to dramatize the dangers of the woods.

Mother hen complains to the farm dog about slack policing, very Shaun the Sheep.  His
attempt to pass off refrigerator eggs as the missing offspring is undone by use-by dates on
them. Meanwhile the hens are taking female defence classes. Despite the confusion about
who is mum, all ends winningly.

"Pour sauver Noël", the pick of the batch has poor pig victim to his friends’ attempts to help
around the farm which demolishes his home (everyone lives in nice granny flats). An
elaborate plot has the duo believe they have offed Santa and try to fill in with the
delivery of Xmas presents while pig wants to stop their delusions getting out of hand but
is restrained by the tiny girl who can’t be told there is no sanity clause.

Nice gags in the end credits which include the director’s favorite recipe.
Posted by Film Alert 101 at 14:58