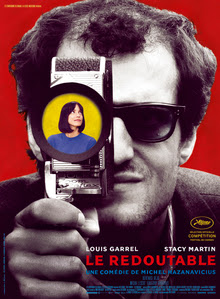 Jean-Luc Godard was the Tommy Wiseau of 1960. Both took on film making without any idea of how to go about it and both achieved extraordinary fame and success. The comparison breaks down about there. The Room was achieved with Wiseau’s mysterious fortune buying the services of Birns and Sawyer’s roster of Hollywood technicians for hire and with an audience ritually falling about laughing in repeater showings. Godard
made his dash in an unprecedented burst of Paris Cinémathèque-inspired interest in film at the launch of the French Nouvelle Vague and in the company of  extraordinarily gifted people – Jean-Paul Belmondo, cameraman Raoul Coutard, musician Michel Legrand and editor Cécile Decugis among them.

Now the comparison has been underlined by two films about the pair, Wiseau in James Franco’s The Disaster Artist and Godard in Michel Hazanavicius’s Redoutable which has surfaced in the current French Film Festival.

His ultra-serious re-make of The Search having just died on him, Hazanavicius was in need of a hit. He has built his reputation on re-tooling cinema eras with a mix of recognition and ridicule - the OSS 117 sixties spy movies or The Artist’s silent adventure. Those films’ appealing Mrs Hazanavicius Bérénice Bejo, now a major star, appears in third billing in the new film for no particular reason.

The question is can Hazanavicius put up Lou Garrel (who better to play a boring character) as a Godard whose life fits this pattern? To start with the subject is still around and has dismissed the project as “stupid, stupid.” His admirers are vocal in their near religious awe.Can a Sydney Film Festival retrospective be far away? This in fact becomes the subject of the film when Godard finds himself overtaken by the events of May ‘68 with which he wants to be associated, throwing cobblestones at the charging flics (one of whom proves to be Romain Goupil, a genial fan in a SWAT team outfit), while rebellious Sorbonne students shout him down at their meeting and attack him in corridor graffiti.

On top of which Godard has just child-brided Anne Wiazemski (François Mauriac’s granddaughter and the lead in Bresson’s Au Hasard, Balthazar) and made his notion of  a serious Marxist statement in 1967’s La Chinoise to an uneasy reception.

Now my recollection of  La Chinoise is mainly one of tedium and the fact that the catchy “Mao Mao” pop number plus the shot of Mlle Wiazemski topless that make the trailer promising are missing from the finished film. My notes mention the leads handling out little red books and the Vietnamese girl menaced by toy planes near the Napalm bowser. The Chinese were similarly unimpressed and canceled Godard’s visa.

Interestingly Redoutable features Godard’s friend Michel Cournot (Grégory Gadebois also in Normandie nue) whose career was truncated when Godard held the curtains from opening on his Les gauloises bleus at the Cannes festival, styled a bourgeois excess after the events of ‘68. There’s even a five people in a cutaway car (most un-Godard) scene where they spell out the opposition between auteur control and Maoist decisions. The
idea is to junk Belmondo, Renoir and John Ford. We’ll let you keep the Marx brothers but it’s films or politics.

Redoutable carries on showing Godard/Garrel alienating fans, friends and contacts until a suicide attempt that Wiazemsky/Stacy Martin takes as un unforgivable assault on her. We end with the crew of the dreadful Vent d’est voting on plot developments in an attempt to function as a collective. It’s not funny here as it’s not funny in real life. You can take my word on that.

A few survivors actually appear, Jean Pierre Mocky as a dignified target of Godard abuse and Michel Subor is there briefly. The piece cuts to black and white to indicate a mood change. There’s a pan along Stacy Martin naked on the bed to recall Bardot in Le Mépris. Miss Martin is a good looking girl who is willing to spend most of the film in various states of undress but she doesn’t register as a personality. In the interests of equal opportunity Lou Garrel and Matteo Martari do full frontals if you’re into that and there’s a scene where the naked
leads discuss the exploitation of naked actors.

Hazanavicius telling us Godard was the right man at the right time is on the way but it
underplays his subject’s one gift - an ability to suggest spontaneity and a contrast to the
hyper-organized work of the auteur directors. It’s all a bit earnest for Hazanavicius’s fans, though there’s a bit from Woody Allen slipped in along the way with Godard encouraged to make ‘em like the early funny ones.

What really defeats the production is that to have the Godard experience you have to have been sitting in made over class rooms watching tattered Sixteen Millimeter prints in the company of adherents faced toward the screen like a sun flower following the sun. Tommy Wiseau’s fans and The Rocky Horror Picture Show lot before them figured that out - “We are the show.”

Oh - and the title refers to the name of a Russian submarine. Somehow that figures.