It took a while but the 2018 French Film Festival finally coughed up work of significance.

We are seeing a cycle of films about rural France - Ce qui nous lie/Back to Burgundy, Tu seras mon fils/You Will Be My Son, Normandy nue/Naked Normandy, and Xavier Beauvois’ current Les gardiennes/The Guardians. These are at odds with classic French cinema depictions like Renoir’s 1929 Le Bled or Marcel Pagnol’s Regain. 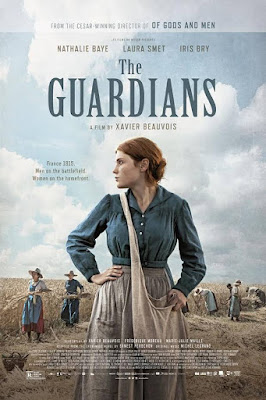 When Les gardiennes kicks off, with a gray-haired Nathalie Baye awkwardly ploughing behind the pair of oxen while the men are off at WW1, it seems we are in for yet another account of the strong woman rising to the demands of the situation.

This is backed up by further Jean-François Millet scenes of farm life - sewing, harvesting, burning charcoal - spread across the wide frame and oddly free of the lush music we anticipate. Eighty-six year old Michel Legrand’s sparse score arrives in unexpected places - the view of the town street.  Legrand does some of his best work here. Beginning Iris Bry’s song again over her still lips is one of his showiest touches.

Les gardiennes avoids dramatic compositions, shooting its scenes of farm life square. As one of the film’s key setting elements, we get the introduction of industrialised farming using new machinery like the wooden harvester or the tractors the poilu soldiers have seen in action at the front.

Rather than elaborated visuals it does however introduce tactile elements - the lovers running their hands over the lichen covered rock in the forest, Baye’s returned farmer husband stroking the steaming back of the farm horse. Touches like the tear forming cut to the river are less effective.

The plot develops when Baye is unable to hire any farm hands for the harvest at the Mairie and Adrien Denizou proposes educated red headed orphan girl Bry, making her first movie and getting all the attention in what finally proves to be a duel of wills with Baye. The older woman recognizes her qualities - hard work, willingness and likability and hires her permanently to the farm.

The established order is further upset when the school teacher son, returned on leave haunted by his battle experiences, is serenaded with their song about the evil Boche by his old class of tinies. He comes to see the enemy as victims like himself. The family proves to have lost respect for him because, by not working on the land, he does not strengthen their heritage.

Trouble arrives when other son Cyril Descours comes back from the front en permission and hits it off with Bry, disrupting his planned union with a resentful young local girl who Bry thought was her friend. Descours takes a dim view of the group of cashed-up Americans billeted there waiting for their deployment, even though they join in on the threshing. They do what Americans do, chatting up the local girls. Baye’s widowed daughter played by Laura Smet, her actual daughter with the late Johnny Haliday, seeks comfort with one and when the GI steals a kiss from Bry, Descours sees it and demands the devoted Bry be sent on her way.

There is a key encounter between his mother and his lover which is the heart of the film. Beauvois gives Bry a beautiful scene outlining the relationship with her unborn son.

This looks like the beachhead into a great career for her. It will be of real interest to see what she does next.

We come to see Baye as Bry does, monstrous like that gallery of forties French cinema matriarchs  -  Marguerite Moreno in Autant Lara’s Douce, Denise Gray in his Le diable au corps or Yvonne de Bay in Cocteau’s Les parents terribles.

There’s some suspense over whether Baye will relent. Using the usually sympathetic actress in this way is unsettling and Beauvois has done it before, making her the tough police captain in his 2005 Le petit lieutenant.  His other casting is similarly eccentric having technicians do double duty in small parts and his own daughter play Marie-Julie Maille's child.

The ending asserts the primacy of the farm tradition representing it as having been even more narrow and brutal than in the new French contemporary set  rural films. This may reflect an official stance or a new awareness.

Outside any message content, Les gardiennes is a serious contender and showcases a whole range of  substantial talents. Beauvois 2010 Des hommes et des dieux/Of Gods & Men got him recognition and following that with this film puts him in the front rank of European directors.

Pierre Jolivet's Les hommes du feu/The Brigade also raises the French Film Festival’s batting average. Involving, unfamiliar and convincing, this one gets to be the all-round best movie we have about fire fighters outclassing The Third Alarm, She Married a Fireman, Red Skies of Montana, Backdraft and the rest.

At capitaine Roschdy Zem’s Centre de Secours Bram fire station in the South of France for first time for them, the new deputy commander is a woman, the Dardennes’ Rosetta herself, Émilie Dequenne. She submits to the horseplay bucket of water over the door and carries the heavy box of hose fittings on her own despite offers of help. However, on her first outing, a two car highway crash, an injured man is missed and left behind and there’s the suggestion that she didn’t do the “Sweep” that should follow incidents.

Roschdy refuses Dequenne’s resignation saying it’s unclear what happened but the victim’s wife, whom she meets in intensive care, sues. Macho (his wife shows up at the station during drills after finding the condoms he used on firemen groupie girls there) Michael Abiteboul blames Emily. So far it could be a midday movie.

What makes Hommes du feu pull away from that model is first the documentation, as we see the range of tasks they get to perform - using the shared oxygen tank mouthpiece routine they have obviously been trained in retrieving the man who has fallen into a wine vat and is overcome by fumes, delivering twins (of course), battling a brush fire menacing a village and Roschdy psyching out the presumed fire bug by sitting down beside him andgiving him a bit of his own back story.

There’s a local high-rise development where they were pelted with rocks from the sixth floor once and have to go back to extinguish a burning bus. The cops try to protect them but Emily turns the foam on the stroppy residents after an injury.

This is all convincingly staged but the best element is the way it depicts the bonding of the group - a necessity in this line of work. They even reminisce about when they used to rescue cats from trees. It’s somehow universal and very French and at the same time. I can hear Charles Vanel describing an “Équipage” as the most beautiful thing in the world.

The pacing and coverage are excellent and writer-director Jolivet shows a skill in anticipating and avoiding cliché. I figured on the traditional inferno and uniformed funeral ending but this one’s “Yes, it is beautiful” is much sharper than that. Zem can do one of these without breaking into a sweat. I preferred his early funny ones but let’s not be picky. The leads are in their element and the unfamiliar faces register well.

Despite too many ordinary choices, I'll be sorry when we run out of this event.
Posted by Film Alert 101 at 13:09