Chris Owen - veteran filmmaker and the guiding presence behind many prominent documentaries from Papua New Guinea, died in Canberra on 9 March 2018.

Born in the UK in 1944, his father died while flying on a mission over France in WW2, while his mother was an executive assistant in Bomber Command.

Chris came to Australia in 1961 and worked variously as a bank clerk, a station-hand, wheat farmer and as a psychiatric nurse.  In 1968, he travelled overland back to the UK where he completed a Diploma in Visual Communication in Birmingham.

He arrived in Papua New Guinea in 1972 as a photographer with the Tourist Board when the country was still under Australian control, and remained there as a resident until 2010.  In 1974 he joined the newly established Institute of PNG Studies, and made his first film Tighten the Drums, about ceremonial decoration in the Western Highlands.

In September 1975 he documented an elaborate fertility ritual in the remote border area of the West Sepik, and days later filmed the nearby Independence celebrations for Dennis O’Rourke’s documentary Yumi Yet.

This was Chris’ first contribution to a suite of landmark documentaries made by Australians in PNG over the next 25 years. He would go on to collaborate as cinematographer, associate producer, advisor and friend with Dennis O’Rourke, Gary Kildea, Bob Connolly, Robin Anderson, Andrew Pike, Les McLaren, Annie Stiven, Alec Morgan, Noriko Sekiguchi and Oliver Howes, as well as with leading filmmakers and anthropologists from Australia, France, Japan, the UK, US and New Zealand.

The list of prize-winning/renowned films he collaborated on include Yumi Yet, Ileksen, Sharkcallers of Kontu, Angels of War, Cannibal Tours, First Contact, Joe Leahy’s Neighbours, Black Harvest, Cowboy and Maria in Town, Taking Pictures and the Japanese production, Senso Daughters.

And there was his own impressive and prizewinning body of documentaries including The Red Bowmen, Gogodala – A Cultural Revival?, Malangan Labadama, Man Without Pigs,  Bridewealth for a Goddess and Betelnut Bisnis.  The last was commissioned by SBS.
These films stand out for their compelling images of culture and change in PNG, and an engagement with the issues and influences affecting ordinary people at the village level.

He also directed a feature film with Albert Toro, Tukana – Husat I Asua? (Who’s to Blame?) about the impact of the Bougainville mine which screened on SBS, and also made information outreach works such as Ramu Pawa (a 5-year cinematic diary of the giant Yonki Dam), Lukautim Bus (Look After Nature), and Re-Forestation Naturally.

Chris believed strongly in the power of film to inform people and shape outcomes for a better society, and it was the mentoring of PNG filmmakers and the promotion of community video production which pre-occupied his last decade in PNG.  After training filmmakers at the Institute of PNG Studies, he moved to Goroka to become Director of the National Film Institute, where he guided many emerging PNG filmmakers including Martin Maden, Baike Johnston, Leoni Kanawi, Ruth Ketau and Ignatius Talania.  The current head of the National Film Institute is a female filmmaker and archivist, Chicco Baru, also mentored by Chris.

He was generous in many ways to many people, and despite his fulsome advocacy against the self interests of the powerful, he was a disarming and witty raconteur – drawing on a wealth of hair-raising and remarkable adventures in the Land of the Unexpected.

As well as numerous international awards for his films, Chris was also honoured with PNG’s distinguished Order of Logoho in 2010, a lifetime achievement award from the Society for Visual Anthropology (USA) in 2017, and Honorary Membership of the Australian Cinematographers’ Association in 2018.

But perhaps the most fitting testimony is from PNG filmmaker Martin Maden: ‘I do not know of one other culture whose children will inherit a film heritage such as the one Chris Owen has given to the people of Papua New Guinea’.

Chris had lived in Canberra since 2010 for health and family reasons, and died in the Fred Ward Gardens nursing home after a long battle with illness and blindness. 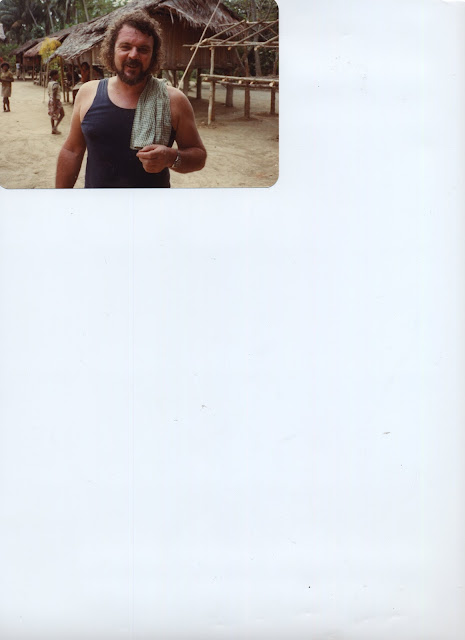