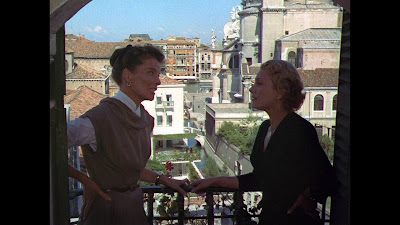 Kate Hepburn with Isa Miranda (above), and in the second screen (below) the archetypal 50s lounge lizard in the form of super-vaselino Rossano Brazzi in David Lean's 1955 Summertime, shot entirely in Venice. (Click on the images to enlarge.)
The screens are from a new no frills German Blu-ray from Concorde (Region B only) which uses an unrestored but quite strong 35mm print, possibly an IB to deliver a nice clean image with good and occasionally brilliant Technicolor hues. The movie is presented in open matte Academy Ratio (1.37:1) which I think is wrong for the mid-fifties period, and the compositions down to the opening credits leave plenty of foot-room as well as headroom which was surely designed to allow for masking to widescreen, be it 1.66 to 1.85. 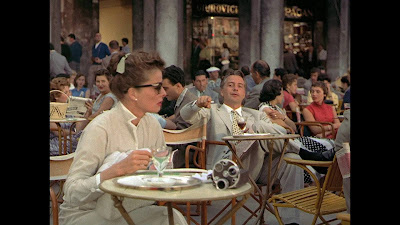 I am absolutely no great fan of Lean nor any of his pompous, often torturously long-winded male only sagas and the kind of faux "Academicism" to Lean's films that ultimately makes them feel completely middlebrow. He never drops the ball so far that anything goes terribly wrong, just dull. But he also surrounded himself with extremely capable writers and other artists. In this case he's filming from a screenplay by the great Arthur Laurents, who for at least the first hour or so of the picture holds in check Lean's tendency to a very unpleasant kind of misogyny, a trait that totally underlines the pseudo-homosocial bollocks of the interminable Florence of Arabia.
Here it's held back, perhaps ironically, by a gay writer, a man with a much broader stroke than Lean, like Laurents. But the last thirty minutes feels like a ski ride out of control down a bumpy hill with Kate seeming to debauch her dignity for the sake of the ludicrous Rossano in yet another of Lean's unpleasantly humiliating sequences designed to bring his heroines "back to earth".


For all of this the picture still has a lot to recommend it, not least the gorgeous Technicolor views of mid-fifties Venice, just before it turned into the tourist nightmare hell it is today. And in a few major but far too brief scenes, Isa Miranda plays the hostess of the pensione where Kate stays, a performance of such warmth and vigor and experience she warms up Kate's scenes in a way not seen since Kate gave the frame over completely, in a long single take, to Judy Holliday's breakdown scene for Cukor's superb The Marrying Kind (1952).
Posted by Film Alert 101 at 15:31