Editor's Note: The 2018 French Film Festival must surely set some sort of record, possibly records. In Sydney in 2018, from its Opening Night film C'est la vie (Le sens de la fête, Olivier Nakache & Eric Tolédo, France, 2017)  screening at three cinemas  on Tuesday 27 February, to its Closing Night 50 is the new 30 (Marie-Francine, Valerie Lemercier, France 2017), punters are offered 1,064 separate sessions of 50 feature films at 5 separate cinemas. The cheapest admission price is $16.50. The most expensive is $35.00 to attend opening or closing night.

Was does that compare with I hear you say. I think its the, perhaps rough, equivalent from the old days, before this behemoth got going, of releasing six new French films and running them in a single cinema for five weeks at 5 sessions a day. That used to be about the level of French film commercial activity over the course of a year. Not any more.

The box office would be still be smaller then because the 'normal' lowest admission price is $6 less than the Festival price and when the film is commercially released the distributor is up for expenses like advertising and marketing.

Palace Cinemas and the French film producers and the state support which sustains them from production through to distribution and international marketing have discovered a whole new way of movie commerce. More films, more producers, more distributors get a risk free return and more punters line up.

Barrie Pattison is devoting a month to covering the event as one of those paying punters.

Here is his first report.

Yes it’s that time of the year again when I have a sixty plus French Film Festival instead of a life, murderously expensive but cheaper than a trip to Paris, even if not as much fun. 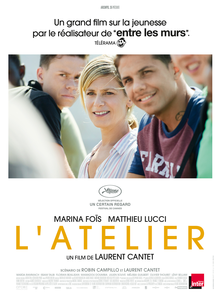 I kicked of with  L'atelier/The Workshop from Laurent (Ressources humaines) Cantet, a subject repeating his preoccupation with employment.  At La Ciotat, where the train entered the station, near Marseilles, Paris novelist Marina Foïs (Polisse) sets up an adult education Atelier made up of seven multi-cultural school leavers referred by the dole board (on penalty of losing benefits) to collaborate on the writing of a novel for possible publication.

The sunny environment with rock-climbing and discussions on the grass counterpointed by computer generated material - the opening game video, historical coverage of the demonstrations,  twenty five years ago, over the closure of the ship yards which still dominate the sky line - and TV pundits.  As the project progresses they determine on a crime thriller and they want to include the shipyard back ground. Foïs has them talk to Communist relatives who faced jail to stop the plant being dismantled and an excursion takes them onto a luxury yacht being maintained there.

Tensions develop over references to Africans, Muslims and Bataclan which members of the group take personally. However, the main dynamic pivots on aggro (first time actor) Matthieu Lucci who spends a large part on the film getting about in his shorts and working out checking his belly flab. (For a film with so much sweaty bare skin there is surprisingly no sex) The group accuse him of getting off on his blood-thirsty description of the crime and he is sent away by Foïs.

Checking the boy’s Facebook page Foïs finds links to a racist orator and coverage of his night time, faces mud-covered, shooting practice with his pals. She goes to his home, meeting his family, to tell him he can come back to the group. However a TV coverage of the workshop, close up talking heads to camera, where she gives a clichéd account of their achieving understanding, sends him off unsmiling.

He’s been stalking her and shows up at her home with that pistol we knew we were going to see again. His last appearance at the dismissive group has him read his telling description of his isolation and there’s a glimpse of his future, working rope on a ship pulling away from the coast where the wind turbines are spinning.

The piece goes on too long and without achieving any revelation but can’t be faulted on performances, its grim but sunny setting or its attempt to break new ground in film form.

We always hope Mathieu Almaric will win through as a director after his telling appearances in his films for Arnaud Desplechin but after Tournée, and  his new Barbara, he’s got two strikes against him. 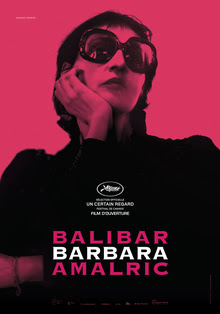 Barbara is a biography of a single name French singer, one of whose 1996 albums sold over a million copies in twelve hours. Her footprint in movies was minimal and I knew her best as a face on Music Hall posters at L’Olympia and the rest.

Well, I’m afraid I understand her less after this movie than I did before. She comes across as a road show Edith Piaf. The things that register are incidentals like her rejecting the piano that Sylvie Vartan’s pianist was happy with and commenting “Sylvie Vartan  has more talent than I do” or running her lines with a man found drinking at the bar who dutifully annotates them for her. Her songs do have an impact. There are references to her WW2 hardships and work as an AIDS activist who gave out condoms at her concerts but they are buried.

The dominating element here is not the subject but the bogus Brechtian form, with film director Almaric playing a film director making a movie about Barbara staring his former wife Jeanne Balibar (Va Savoir, Clean) injecting himself into scenes or confusing the issue with dupey looking footage of Balibar to frame an archival clip of the real Barbara singing. One scene plays in Barbara’s flat where her real life associate walks in objecting that the poster is on the wrong wall after the shot has revealed Almaric’s unit filming Balibar at the piano. The setting is stripped, the view from the window proving to be a backcloth, and the piano moved onto the adjacent process stage where Balibar sits down and starts to sing. It’s all right to be confused.

What the admirable Aurore Clement - and her character - is doing in all this I can’t fathom.