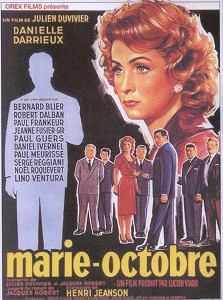 Until the mid-1950s English play "Look Back in Anger" which introduced "the kitchen sink" into theatre and subsequently cinema, innumerable, certainly English movies and plays where of the "well constructed" type. Thereafter greater realism, and an interest in more working-class themes, if not prevailing, certainly became more noticeable. I am generally unaware of whether such a distinction can be made in relation to French theatre and cinema. In the "well constructed" movie, characters tend to be "types", generally distinguishable by class (accent etc) and dress. Characterisations by externalities. Themes seem to be rolled out in a logical or at least pleasing fashion with a readily comprehensible denouement. These sorts of works have tended to become more the province of television and the Agatha Christie series, in all their varieties, are perfect examples.

Agatha Christie is a perfect comparison for this film. The film is a mystery/whodunnit. It is shot entirely in one set, albeit a large studio set. It is a virtual "sealed room" mystery. Marie, beautiful but unmarried, and pushing a certain age is a couturier financed by François, an industrialist. Both were underlings to a World War II resistance cell leader, Castille. Marie was his lover and the experience, for good or ill, turned off further relations. As back story and quite by chance, a German clothing buyer, meeting Marie, explains that he was an officer in German intelligence during the war and was instrumental in killing Castille, through the treachery of one of the members of the cell, although he, the German officer, can't remember the traitor' s name.

It's an odd subject for conversation, only 14 years after the war's end and looked at logically it's not the sort of thing that anyone would say while contemplating buying women's frocks! But like all such similar films the momentum of plot makes it seem quite acceptable. Marie calls together for dinner at her manor house all the members of the cell so that they can jointly find who was the traitor and punish him.

As one expects in such a story, everyone, including Marie, has had an opportunity and some incentive to betray the leader and the cell. It is all handled extremely competently and the denouement and final scene show the killing of the traitor by the character one would certainly guess (no spoiler alerts here) is the person one least expects. There is very little else to say about the storyline. I can only say it is consistent with the director' s usual melancholic attitude of the world in that it makes clear that even the very best of men are capable of evil and that no one can be intrinsically trustworthy. But that is a long bow. The very clipped ending without the tying up of all the loose ends is typically European. And the film is the better for it. 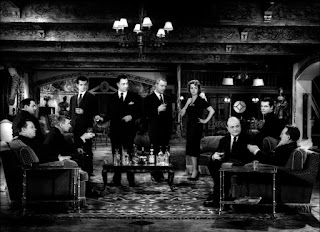 There is far more delight in the actual staging. The large studio set is an amalgam of French baronial styles of furnishings: painted oak beam ceilings from the Renaissance, Roman themed murals from the Napoleonic period, bits and pieces of baroque and rococo furniture interspersed with more modern lounge suites. Except that cooking doesn't take place in the room, it is like a high-class open plan family room and if it sounds vulgar, it surely is. While very professionally composed, is a little too gaudy as a background and suggests that art direction took the view that what was going on in the foreground may not have been interesting enough in itself and thus required some sort of opulent contrast. All the male actors are dressed in sombre suits, nearly all of them double-breasted and they resemble "business types" one would have thought of as from the beginning of the decade, rather than the end. They look a little too uniform for differentiation purposes and they don't stand out at all well against the background. That however may be deliberate.

Just about every distinguished male theatre and/or cinema actor of the period is present. All acting is very good within the limits of the genre and there are only two female roles, Marie and her live-in cook. It's quite pointless making criticism that the script "which tells rather than shows" because that's the nature of the genre. I found it a very enjoyable romp but when it comes to this director, I am very easily pleased.

Possibly more relevant to a modern viewer is the knowledge that French society, and this includes its cinema, had great difficulty coming to terms with the Occupation, with collaborators, of whom there were far more than most French people wished to accept and finally traitors who actively worked against the interests of the French nation. It's one of the singular achievements of French society and this can be shown in many films subsequently that gradually they became more open in the capacity to express this national shame. This present film must be one of the earliest to deal, if not with collaboration, then with base treachery.