Editor's Note. I asked serious young cinephile Shaun Heenan to send in a review of JJ Abrams new Star Wars movie. In his covering note Shaun mentioned "Some of it may read like gibberish to those unfamiliar with those films, but I think anyone with any interest at all will know what I'm talking about. The film surprised me by sneaking into my top 5 for the year. I'll see it again as soon as I get the chance." 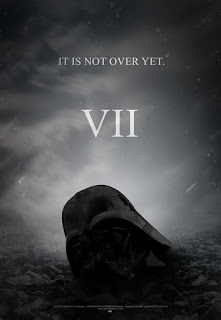 Star Wars: Episode VII - The Force Awakens has broken just about every box office record it could have, so odds are if you care about it at all, you have already seen it. That said, I’ve noticed people are being particularly touchy about ‘spoilers’ in reviews of this film. These seem to include any sentence describing the characters, premise or themes of the movie. I’m not going to go out of my way to ruin it for people, but I am going to talk about the film I’m reviewing, so if you’re at all concerned about learning too much, know that I recommend it very highly, and stop reading. If you have ever cared about Star Wars, you need to see this film.
The first thing that hits you is the aesthetic. Episode VII looks exactly like the original three Star Wars movies. There’s a tactility to the special effects which makes this feel like exactly what it is: a direct sequel to Return of the Jedi. In the years since that trilogy ended, Luke Skywalker has gone into exile. Familiar faces return, with Han Solo and Leia Organa played by the actors from the original films, but the focus is on a new generation of characters who will join in the search for Skywalker, as a group called the First Order threatens to follow in the footsteps of the defeated Empire.

The film’s lead is Rey, played by relative unknown Daisy Ridley. She’s joined by Finn, a defected Stormtrooper played by John Boyega, and hotshot Rebel pilot Poe Dameron, played by the ever-reliable Oscar Isaac. These three characters are played with a level of joy and enthusiasm which makes us fall for them immediately. Gone is the stilted acting and wooden dialogue of the prequel trilogy. These characters feel right at home in the universe we remember. They act like Star Wars characters, and it’s great to see them fitting in so well with the original cast.

The other major new entrant is Kylo Ren (Adam Driver), a First Order officer with Force powers and a familiar sense of style. With his voice-changing mask and black cape, he has deliberately modeled himself on Darth Vader, and his struggle to live up to the Sith Lord’s great legacy offers some of the best moments in the film. I thought at first that he seemed to be a poor substitute for Vader. Then I realised that’s exactly the point. The film knows it, and the character knows it, and it’s tearing him apart. Ren’s fight with a character I won’t name is perhaps the best lightsaber battle in the entire franchise.

Now that the series has moved on from the control of original director George Lucas, it has been passed along to people who grew up loving the original movies, and who know how to replicate those films. It could be argued that director J.J. Abrams has been too referential to other movies in the series, but he’s done great things here, taking control of the lore and adding to it in exciting ways. I can’t wait to see where the rest of the series is going.

After the missteps of the prequel trilogy, it’s an incredible relief to see Star Wars feeling like itself again. This is the movie that Star Wars fans have been hoping for since 1983. With its witty writing, fantastic action and successful additions to the canon, this isn’t just a great Star Wars movie; it’s one of the best films I’ve seen all year.
Posted by Film Alert 101 at 13:12