The Current Cinema - Barrie Pattison on In the Heart of the Sea,Tornatore's The Best Offer and more

The pleasures of watching the new films of people with whose output you are familiar and whose thinking you can see at work in them is becoming rare. Brian de Palma and Oliver Stone have all but joined Henry Hathaway and Don Siegel as part of old guy cinema. Roland Emmerich is on the way. Only Scorsese hangs in there.

However this week new(ish) work from two of the reliables reached me. 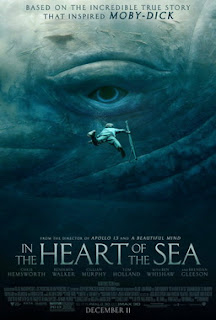 Ron Howard (will you ever forget him in The Journey (Anatole Litvak, USA 1959 billed as Ronny Howard?) has just released In the Heart of the Sea  his historical sea faring movie with Herman Melville as a character, to less than enthusiast reviews.

It may not be the best example of 3D to date but it is certainly the most determined. The whale tail coming down on the sailor in the ocean is particularly alarming and the shots are full of silhouette foreground objects, ropes, furniture - falling ships fittings and twisting broken rigging. This handling creates an engulfing film world comparable to the drive in Great Gatsby even if a  downward close up of an ink well is just strange. See it from about screen height back into the auditorium. There will be less people texting in the rows in front of you that way too.

We get Chris Hemsworth cutting loose the rigging, harpooning or swimming under the blazing hulk with the muskets, all contributing to the star hero image he just about manages to project, with some less successful social class material representing him as “the son of a farmer who has bluffed his way into an officer’s tunic.” The set pieces, the ship-crushing squall, the actual whale hunt and  the encounter with the monster are imposing but making “abominations” attention holding screen fare defeats them here as much as it did the makers of Burke & Wills. Even so this is a class act which needs to be seen before it gets flattened out. 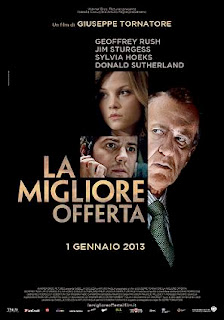 The other item is Giuseppe Tornatorre’s The Best Offer which had one of those blink and you miss it art releases a while back.

The film is full of Tornatore’s pre-occupations - like Jacques Perrin in Cinema Paradiso, celebrity art auctioneer Geoffrey Rush is obsessive to the point of ignoring real people. There is a hidden woman like La sconosciuta. The elegant images backed by the Morricone (there’s someone who’s hanging in there) score create atmosphere edging on for Argento or La grande bellezza, particularly with moments like the gift  roses falling round Rush or him against the walls of paintings but this one is more literary, evoking HenryJames and it is too verbal and finally too obvious and clearly the work of a writer-director for whom English is not his first language. Tornatore’s The Legend of 1900 worked better.

Even so there’s a lot to admire, particularly in the exposition - Donald Sutherland, part of the insider art trading, cautioning   “Emotions are like works of art. They can be forged, they seem just like the original but they are forgery”, the reconstitution of the 18th Century automata (they reference the mechanical chess player) paralleling Rush’s humanising or the emergence of Sylvia Hoeks, who pulls of the difficult feat of being ”like a Durer etching” revealed first by her eye at the view hole resembling the restored center of thegrime coated painting. Though the film has lost it’s mojo by then, the last scene with the dwarf calculator woman is a quite brilliant way of rounding out the plot.

A beautiful parallel import disc made that one accessible.
Posted by Film Alert 101 at 03:47