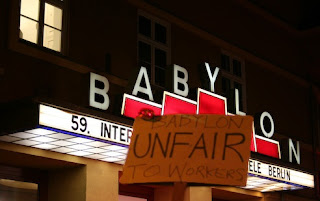 During a stinking July heatwave we ventured into Rosa-Luxemburg-Platz to see Murnau’s Nosferatu in the 1929 Babylon Cinema, a famous example of New Objectivity architecture. The screening was a revelation not so much for the image (although it was a superb copy) as for the sound. The score was played on the cinema’s original Phillips-Kino-Orgel (click link for a four minute You Tube explanation.) as part of a competition of organists accompanying silent films. The acoustics were amazing - music reverberating and bouncing from multiple points off the walls, ceiling and floor creating an immersive effect far better than most cinema surround sound systems I’ve heard. Weimar Germany…sigh…”


A picket line of cinema workers, which seems to have been continuously running since 2009, was camped out the front of the Babylon, protesting pay and conditions brought down by the owner of the cinema, a man with a fascinating back story. His father was an American GI who reached Berlin in 1945 defected to East Germany  in 1952 after swimming the Danube. There he spent much of his life in organised labour relations. Recently the unions have been calling the cinema owner “the Margaret Thatcher of Rosa-Luxemburg-Platz” and the owner, who is Jewish, has retaliated by painting Stars of David on the cinema doors, making it look like the unions are anti-Semitic.

In his 90s, the father had returned to Berlin to berate his son for his politics and help organise a Trade Union for Anarchists. LOL

Features I liked this year: The Assassin, Astu, Corn Island, Clouds of Sils Maria, The End of the Tour, Ex Machina, Far From Men, Inherent Vice, Mad Max: Fury Road, Theeb, Tangerine, ’71, The Wonders and finally caught up with La Cienaga (Argentina) and Turkish films Uzak, Three Monkeys and My Only Sunshine (the first two from Nuri Bilge Ceylan).

Docos: Amy, Cartel Land, The Chinese Mayor,  Citizenfour, Lambert and Stamp, Salt of the Earth and The Wolf Pack. 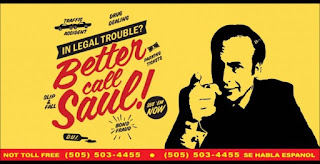