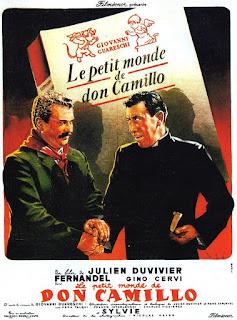 These are the first two of a long series of gentle comedies starring the actors mentioned above. Only these two were directed by M Duvivier and in my view they are superior in terms of quality of production to their numerous successors. They gave the lead actor Fernandel a worldwide reputation. They were immensely successful. My review is not so favourable although I must concede that I do not have a particular sensitivity to comedy. I would like to try to unify at least these two films within the general perspective of the director' s work, acknowledging that M. Duvivier took a very serious view of life!

The author of the short stories Giovanni Guareschi apparently based his protagonist on a real-life Catholic "pugilist priest". The many short stories he wrote were ultimately collected into a series of books but the author only saw three of eight books published in his lifetime. The author was a supporter of the Italian monarchy which was abolished in 1946 and he thereafter transferred his loyalties to the right wing Liberal Democratic party, widely thought to be supported by the Vatican and the CIA and known for many years for its "patronage" (otherwise known as corruption) system of politics. Its principal adversary was the Italian Communist Party which was at the time of writing of the stories and subsequently, a hardline Stalinist Communist Party. There was a genuine possibility that the Communist Party would take power in Italy. Don Camillo is a loyal supporter of the "right", naturally involving himself in politics in a way that would be considered entirely unacceptable now. Giuseppe is the town mayor, apparently relatively prosperous but a Communist.

Prior to the Second World War of course Italy was a fascist dictatorship. While not racially exclusive in the main, it was certainly authoritarian and this characteristic was both inherited by the right and left wings politics in post-war Italy and is seen quite clearly in the two films. Both Don Camillo and Giuseppe, as symbolic and real representatives of their political leanings, have little hesitation in making use of public funds to further their own aims, and to bluster and cajole their purported followers to do their bidding. It is said that in post-war Italy Italians frequently voted on Saturday election days for the Communists and prayed fervently on Sundays that they would not be elected. To me at least this is conveyed in the films and they strike me as being altogether more serious than simple bland comedy. My guess is that this would have been an attraction to the director.

Without going into the plot of either or both films in detail, they are both episodic involving a series of issues of relevance to the township which is somewhere in the Po Valley. To continue issues which cause me concern in relation to the immediately preceding paragraph, in the first film Don Camillo blackmails Giuseppe who has financed the construction of a new community hall (under his patronage) with money stolen from fascists during Second World War. In the same film farm labourers strike under the auspices of the Communists so that a special tax can be imposed upon landowners. In the second film the Communist council proposes to compulsorily acquire the land of a local wine grower so that his land can be used to assist in making a dam.  While all of these are very serious issues they are played with a very light touch, almost as being inconsequential. The two characters despite external differences are secretly fond of each other and work together to resolve otherwise intractable issues. As this bears on reality, it is really encouraging the audience to view as trifling what were in fact really serious social difficulties, especially considering that the first film, at least from the book is set in 1946, a very troubled time for post-war Italy. Most of the disputes which can seem at times rather manufactured relate to Communist versus the Right.

Although generally described as a comedy, it is certainly not laugh out loud. Perhaps "whimsy" or "charm" might be better words. Whatever one's views as to the comedy, I see the director' s consistent pessimism sneaking through, commenting in his generally perceptive way, that the problems of life are generally unresolved or resolved only with considerable cost. 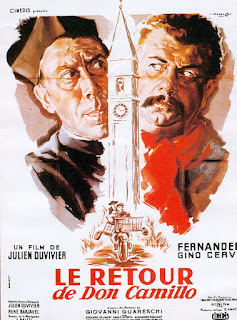 The direction is up to M. Duvivier's highly competent professional standard. There is a generally seamless blending of on location shots with studio bound work. The very first scenes of the first film encompass the town square, the town being a unnamed in the film but it is Brescello. Given the size of the town square it is a much more significant place than described and there are some beautiful shots from the church bell tower as well as (I think) studio shots of the same thing. Crowd scenes of presumably non-actors are exceptionally well handled. In the second film stock footage of a serious flood (apparently endemic to the Po Valley) is juxtaposed with studio shots. This is particularly expertly carried out in the flooding of the local church in a studio shot from what is an exceptionally faithful recreation of what I think is the original. If for no other reason it captures a rural life now completely gone.

Rubber faced Fernandel is to me unconvincing but I must defer to more astute and sensitive critics. Gino Cervi is generally more restrained but I think is forced to "up the wattage" in his direct scenes opposite Fernandel.

Given their outstanding success over a long period, readers may well be advised to consider my criticism unfair. Both these films are well worth watching simply because of the professionalism of the director. I have not seen the totality of the balance of the series, but those I have seen indicate that they overstay their welcome. For admirers of this director, both films ought to be seen for completeness, preferably separately.
Posted by Film Alert 101 at 00:32