1. The increasingly legendary Il Cinema Ritrovato in Bologna straddles the end of June and start of July each year and more than edges into the very hot Northern Italian summer when the two commercial cinemas used for this festival are not the most successfully air-conditioned. This year one of the most popular strands of the programme was devoted to screening original 35mm Technicolor prints not to be confused with another sidebar highlighting the glories of other kinds of colour cinematography over the decades, often screening restorations on DCP. 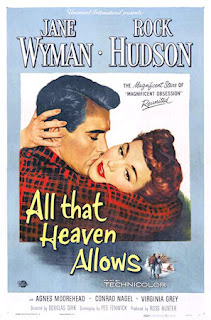 For me one of the most anticipated programmes was Douglas Sirk's ALL THAT HEAVEN ALLOWS, a 1955 release shown in a Technicolor print derived, the programme notes advised, from Eastmancolor negatives. This print screened with rights holders' permission was made by Tech London in 1956 and now in the very large collection of the Cinematheque Royale de Belgique. Over the years I've seen colour television transmissions of the film and have the Criterion disc as well.  ACMI in Melbourne, in a short Sirk season a few years ago, screened a new, presumably Eastmancolor print of the film where the colour appeared a bit muted.  The anticipation for an original print was so great. Sometimes live introductions to films can seem longer than required, particularly if they are being translated at least once for a local audience. However Nicola Mazzanti from the Belgian archive was really fired up for this occasion extolling the heavenly and unique qualities of Technicolor in his opinion. This only increased the level of expectation. The film was marvellous as always. It's exciting to see a sixty year old film, a favourite of one's own for many decades, with an audience of much younger people who presumably have never experienced this rich and emotional journey before. It was a joyous afternoon.

2. Peter von Bagh as artistic director  was one of the iconic mainstays of this same Il Cinema Ritrovato festival along with the significance of his position as head of the Finnish Film Archive, the editor of Filmihullu magazine and director of the Midnight Sun FIlm Festival. His passing in 2014 was a tragic event. Some of his many legacies continue on the DVDs of the films he directed.  It was wonderful to find these could be bought from the many tables of unusual home video discs on display on the opening days of the Bologna festival.  FINNISH SUITE is a set of three documentaries by Peter von Bagh and I believe the discs are available separately as well.

The earliest of these three films, HELSINKI, FOREVER  (2008) is a marvellous 75 minute documentary with a non-fictional narrative of its very own as the director weaves a fascinating exploration of his homeland and its cinema together with music and other visual arts and writing. These 75 minutes breathe von Bagh's passion for the cinema as well as the subjects at hand.

3. From Bologna to Finland itself.  In the northern Spring I found myself with a week to spend between seven days in Moscow and St. Petersburg and a similar time organised in the three Baltic States.  Finland seemed the obvious place to experience Scandinavia for the first time under these circumstances.  Unusually, my friend and I had planned little, just wanting to explore Helsinki day by day with visits to two other cities further away on two of the days. As we hadn't arranged much ahead of time, the many experiences of Finnish cinephilia were all the more astonishing.  Apart from its film and collection of publications, The Finnish Film Archive has a very comprehensive and busy screening schedule, about three sessions a day for the seven days of the week.  The programmes reflect a passion for the cinema and its history.

Alongside screenings of significant Finnish films there are for example in one quarterly period and either in English or with English subtitles  tributes to Ingrid Bergman, Orson Welles,  fairytale films like Charles Laughton's NIGHT OF THE HUNTER or Jaromil Jires' VALERIE AND HER WEEK OF WONDERS, treasures of Chinese cinema alongside new works by Lou Ye, remakes, sing-alongs, 70mm presentations such as the sold out 2001; A SPACE ODYSSEY in the Bio Rex cinema near the central station, Mapplethorpe and Warhol with split screen projection of CHELSEA GIRLS, films by Claire Denis, the BACK TO THE FUTURE trilogy and more fairy tales for children, examples of World Film History of the last 120 years, a Robert Altman tribute of over a dozen films and more science fiction.

A true example of cinephilia is their programming of Mizoguchi's UGETSU MONOGATARI in 35mm to celebrate Halloween alongside the more expected inclusions such as MONSTER HOUSE, CARRIE, NIGHT OF THE LIVING DEAD and indeed John Carpenter's HALLOWEEN itself.

Most of the Finnish Film Archive screenings are held in the jewel box Orion Theatre which dates back to the silent film era of the late 1920s.  We were fortunate to see Cheng Bugao's SPRING SILKWORMS, a silent film from 1933, in these lovely surroundings. A most hospitable Turkish restaurant almost next door, busy in its own right, must be an extremely popular and inexpensive  eating place for patrons of the Orion.

The film lovers of Finland are so fortunate to have the passion, dedication and knowledge of Antti Alanen and his team.  Let's hope Antii's contribution to the senses of cinema world poll will follow last year's edition and kick off the A listings when they go on line in coming weeks.

For DVD collectors, the Archive has produced a comprehensive selection of Finnish films with English subtitles and introductions by film scholars.

In a large bookshop on one of Helsinki's grand boulevards, I asked about publications on Finnish or Scandinavian theatre buildings.  Only recently published, the book displayed below is a marvellous collection of images of cinemas often long gone.  There is almost no English text but the images and technical descriptions speak for themselves.  An essential book for lovers of cinema history and architecture.

The cinema of Teuvo Tulio is a fascinating cycle ranging over four decades from the late silent period when he was a charismatic actor to his unique films as director from the 1930s to the 1970s.   A handful of his earlier films have been praised when shown in New York and London. J. Hoberman's enthusiastic piece can be found online.

Tulio (Theodor Antonius Tugai) made films in Finland although he was born in Latvia in 1912, the son of a Turkish-Polish father and Persian-Latvian mother who later married a Finn and moved the family to Helsinki. Tulio's exotic looks gained him a reputation as an Eastern European Valentino.  An example of his charisma can be seen on YouTube in one of silent films in which he acted. A shame his acting career seemed to end when he moved behind the camera.

The Finnish Film Archive has produced three DVD boxes of Tulio's features, each of which houses four titles.  Sadly the first three films directed by Tulio were lost in a huge film warehouse fire in Helsinki long ago  but his remaining twelve works as director are immortalised in these DVD releases.  There are many extras including alternative Swedish versions of some of the films - different films not simply dubbed versions - and introductions by eminent scholars and writers such as, once again, Peter von Bagh and Antti Alanen.

Special relevance to us today is the fascination for which Aki Kausmaki shows for these works.  A comparison with Fassbinder's fondness for Sirkian melodramas is sometimes made.

4. In Melbourne, film lovers are fortunate to have the separately curated film screenings by the Australian Centre of the Moving Image, a facility that plays host also to various national and theme-based film festivals and is the weekly home of the Melbourne Cinematheque on most Wednesday nights.  The dedicated band of programmers of the Melbourne Cinematheque are determined to show 35mm prints of as many of their selections as search time and budgets allow, along with the more recent wish of some film rights holders that only digital copies of their films can be shown in their complete belief these will be superior to possibly worn film prints.   Going back to entry 1 where I wrote about ALL THAT HEAVEN ALLOWS in Bologna, sometimes original archive prints survive with subtitles added in one or more languages. The Sirk film carried French and Dutch subtitles. I believe the original print of VERTIGO shown in Bologna included French captions.  Some years back at that same festival, Nicholas Ray's WIND ACROSS THE EVERGLADES was screened in a Technicolor print from another European archive with French and German subtitles.  This digression leads us to prints our Melbourne Cinematheque may receive from time to time with either no subtitles or  subtitles in another language, e.g. Nicholas Ray (again) whose PARTY GIRL couid only be found in 35mm with French subtitles. This is not such a problem if the viewing can concentrate on the rhythm of the editing of the film and not the pulse of the captions.

Providing on the spot english subtitles has become the domain of Michael Koller, one of the Cinematheque's stalwart programmers and presenters.  Many decades of dedication here.
In only recent weeks he's sat with his Macbook at the back of ACMI 2 with finger poised on the Enter key to help the rest of us gain more from a film that may have arrived from Hungary with French subtitles or, as in early December, not one but two 35mm prints of Marcel L'Herbier films (the silent L'INHUMAINE and the sound film LE BONHEUR) with no English translations on screen at all . If it weren't for Michael's patience and hard work gleaning the texts from wherever, the most of the audience would have a less rich experience of the films.    The perils are everywhere in this endeavour, from unknown alternative versions of films appearing at short notice to the many other technical hazards of computers. 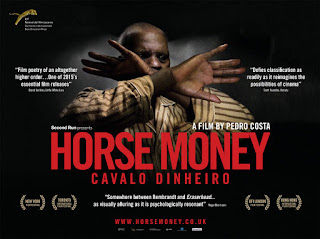 5.  During this year's Hong Kong International Film Festival, one of the -screenings of Pedro Costa's magnificent and relatively short feature HORSE MONEY was followed by an extensive Q&A session hosted by Chris Fujiwara.  It may have taken a little time for Costa to warm up to expectations of the eager full house of mostly young Chinese attendees but then the questions and fascinating responses kept people spellbound for over an hour.  This hour of dedicated questions by an authoritative and personable film lover to one of the major figures in contemporary world cinema was something I felt privileged to attend.

6.  Epilogue.  In being asked to contribute to this endeavour, I can't resist the impulse to acknowledge that blogs such as this are exemplary evidence of cinephilia in themselves.

While there is so much ineffective and spurious information on so many internet searches, blogs such as the Gardner, Bordwell-Thompson and a few others are always something to anticipate, hopefully at least once a week.