As you might remember from another contribution on this blog, I’ve recently moved to South West Rocks . It’s something of a beachside retirement village, situated almost exactly halfway between Sydney and Brisbane. The local cinema is a single-screen affair in what looks to be a repurposed town hall. Unusually for such a small cinema, it is fully outfitted to show 3D films. It’s nice to have something available locally, but the single screen and the audience demographics mean that I often have to travel more than an hour north (Nambucca Heads) or south (Port Macquarie) to see even relatively mainstream films. This week’s major release Creed isn’t playing in either of those locations, so I suppose I’ll be waiting for a VOD (Video on Demand) release for that one.
My location doesn’t stop me from watching interesting films, but it does mean I sometimes have to get a little creative to see them. I’ll be using this space as a diary, with weekly updates on what I’ve been watching and where I’ve been finding the films. 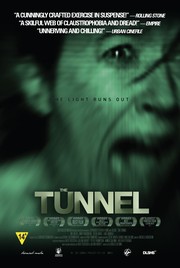 By random chance a few weeks ago I came across a Facebook post about a limited edition Blu Ray release of the low-budget 2011 Australian horror film The Tunnel. The film was being given away free to those willing to pay $10 shipping. The disc is professionally produced, with a good collection of interviews and documentaries, and is hand-numbered on the spine. (Mine is 306/1000). The physical release is rare due to the film’s unique distribution method: It’s one of the only films ever to be officially released for free download via torrent websites, which are usually the illegal method of access.
The film itself is less interesting than its distribution history. It’s a handheld film about a news crew exploring the abandoned tunnels underneath St. James station in Sydney. There’s a vaguely-defined conspiracy theory about the Government hiding the truth about the tunnels, including an amusing scene where the actors have turned up at a real press conference featuring then-PM Julia Gillard, and filmed their own story on the side while occasionally panning over to include her in the shot.

Once we get into the tunnels, it’s the same lost-in-the-dark movie we’ve seen many times, with the only real draw being the creepiness of seeing a horrific beast prowling beneath streets we recognise. It’s interesting, but I can’t recommend it too strongly. 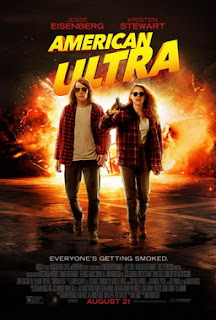 The low point of the week was American Ultra, an ugly action-comedy which isn’t half as funny as it intends to be. Jesse Eisenberg and Kristen Stewart play a young couple stuck in boring dead-end jobs who sit at home smoking pot. Eisenberg has a panic attack every time he tries to leave town, and it turns out this is because he’s a CIA-trained sleeper agent. A group of trained assassins try to kill him and he kills them instead. This repeats. The film is surprisingly violent and bloody, but not enough to make it stand out. I’m sure it’s supposed to be hilarious, but I didn’t even crack a smile.
The film had a brief release in Australia in September, for which I’m told there were no media screenings. It didn’t open wide enough for me to see it up here, so I caught up with it on U.S. streaming site Vudu. This is a good place to rent movies which aren’t available in Australia yet. The methods used to access these sites are beyond the scope of this article, but you can figure it out easily enough with Google. Prime Minister Malcolm Turnbull has very usefully stated that it’s legal to do so, which is nice for those of us who’d struggle to find some films otherwise. 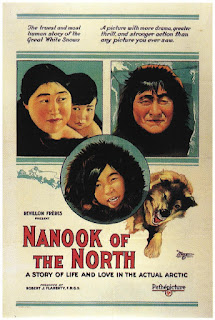 I stepped back in time to the silent era to watch Robert J. Flaherty’s silent quasi-documentary Nanook of the North. The story as I understand it is that Flaherty had filmed real documentary footage of Inuit hunters in Northern Canada, but when he came home to edit the film he dropped a lit cigarette and the entire print burned up. He returned to reshoot the same scenes, and had an Inuit family act out some of what he’d lost in the fire. Real or not, it’s remarkable footage, showing Nanook (not his real name) and his family making their way through a harsh landscape in an attempt to survive, building igloos for shelter and spearing seals for food. The hunting scenes are tough to watch, since they spare no detail. It’s a real survival story, made more haunting by the knowledge that the family seen onscreen actually froze to death before the film was ever shown.
I’ve been watching a number of silent films recently, including several of D.W. Griffith’s works and Fritz Lang’s  Dr. Mabuse The Gambler, which runs for over four hours. I’ve been working my way through a list of all films included in the various editions of 1001 Movies You Must See Before You Die (626/1177 currently), and at the moment I’m going through the early years in order. Nanook of the North is available on a high-quality Criterion disc, but I found it on Youtube instead. Due to the nature of public domain, you can find almost any silent film you care to name steaming freely online these days.

Later that night I returned to Vudu to watch Giulio Paradisi’s 1979 sci-fi film The Visitor, which I was attracted to by some psychedelic cover art. There are hints of Jodorowsky in the plot, which follows the clash between a cosmic religious figure and a young Earth girl who is the daughter of a space-devil called Sateen. The girl has a pet hawk which she uses to attack people. It’s crazy, but not crazy enough to warrant seeking it out. What we have here is a more unhinged version of The Omen, with occasional glimpses of the bizarre. The film wasn’t seen uncut in the United States until a pair of recent re-releases by Code Red and Drafthouse Films, the latter of which is also responsible for it appearing on VOD sites. 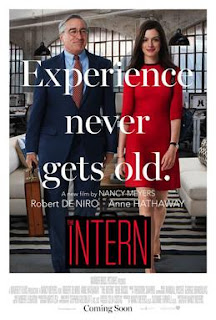 The Intern is a charming new feature from writer-director Nancy Meyers, whose work is has been mostly unseen by me. Robert De Niro gives his best performance in years as Ben, a 70-year-old widower who has grown bored of retired life. In an unlikely turn of events, he finds a new lease of life working as a ‘senior intern’ for an online fashion sales website built from the ground up by Jules (another strong performance from Anne Hathaway). Jules has no time for an intern, but Ben is so gentlemanly and displays such wisdom that they become close friends anyway. The Intern could have coasted by on the strength of this relationship and been a pleasant enough film, but certain late-game revelations offer much greater staying power. It goes to some really interesting places, and I was left very impressed. It’s unfortunate that the film is occasionally undercut by big Hollywood comedic moments, none of which work at all, but there’s more than enough here to recommend.
The Intern is a good indicator of my local cinema’s release schedule: It opened widely across Australia on October 1st, but this November 26th screening was the first local session. 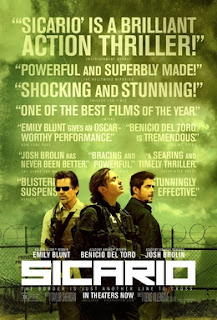 The other local cinema release this week was Denis Villeneuve’s marvelous Sicario, which I had previously seen on a trip south back in September. I try to make a point of rewatching all of my favourite films from each year, and Sicario absolutely qualifies. Emily Blunt gives a career-best performance FBI agent Kate Macer who becomes heavily entangled in a cross-border war with a drug cartel. Roger Deakins reminds us that he’s one of the world’s best cinematographers and Jóhann Jóhannsson’s score ranges from silent to blaring, making the audience feel as overwhelmed as Macer when it truly kicks into gear. It’s a technical masterwork, and the screenplay offers exactly the same level of quality. Villeneuve’s recent output has been consistently excellent, from Incendies to Prisoners to Enemy, but Sicario is his best film, and it’s one of the best of the year.
Saturday

I closed out the week with another Youtube-sourced silent semi-documentary in the form of Benjamin Christensen’s Häxan: Witchcraft Through the Ages. It’s more of an essay than a documentary, really, arguing for reason over superstition and suggesting that women diagnosed with hysteria in the 1920s would have been condemned as witches had they been born earlier. Christensen presents medieval artworks of witches, showing both their purported actions and their horrific punishments. This is intercut with a series of narrative vignettes, most of which are less compelling than the documentary portions, though some of them offer memorable visuals. It’s been interesting to see some of the documentaries made in the early years of cinema, before the form was fully defined. 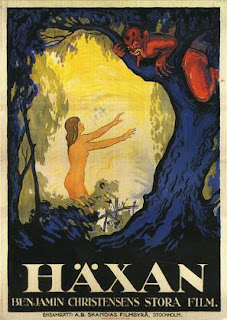 That’s it for full-length films this week, but I also came across an interesting short documentary called Smut Hounds on ABC iView, in which David Stratton describes some of his experience fighting censorship as director of the Sydney Film Festival. The short played at this year’s festival, but I missed it there. You can find it here  until December 5th:
Posted by Film Alert 101 at 23:14