Malcolm Turnbull and the wrath of the film industry 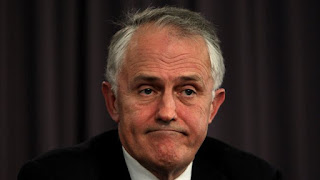 There may never have been a Prime Minister before who blithely allowed his Treasurer to cut into money flowing into the PM’s own, very specific, constituency in the way that Malcolm Turnbull has done in recent days. Treasurer Scott (‘work, save,invest’) Morrison announced the latest cuts in the Federal Government’s Mid-Year Economic Forecasts. The PM was nowhere to be seen and in fact took off for a one dayer with Prime Minister Shinzo Abe, one of the current crop of far right Japanese politicians busily attempting to rewrite history and thus a man not to be trusted on anything from building submarines to resuming the slaughter of whales in the Southern Ocean.

Which left the film industry to howl at the moon as ever more money was siphoned out of its government provided reserves. This is the third such extraction since Abbott and now Turnbull took up Canberra residence in somewhere else other than The Lodge. What the film industry has done to the Liberal Party, apart from presenting itself as a soft target, is hard to guess. Whatever, Prime Minister Turnbull, in whose electorate of Wentworth lies much of the industry's network of studios, production houses, supporting businesses and key personnel, has been conspicuously silent on this, as on many of the other matters for which there was hope that he might draw some decisive ends to the abominations of the Abbott Credlin era.

Not to be apparently. Needless to say the affected institution, Screen Australia, far from exercising its statutory independence in the manner of Gillian Triggs, has meekly accepted its fate. Inside Film reported that  ‘a spokeswoman for Screen Australia said while any cut was difficult, Screen Australia understood the fiscal position of the government.’ By which we take it to mean that Screen Australia, like the rest of the apparatus of the Federal Government probably also accepts that its fate is what it is in some very large part because News Corp, Google, Amazon and more than five hundred others of the biggest listed companies in Australia pay no tax and thus Federal Government spending has to be squeezed to accommodate the situation wherein the iron ore, oil and gas companies have stopped being tax milch cows and the Commonwealth budget has opened up some possibly catastrophic black holes.  Pity the film industry, always seen as a vanity come cottage affair needing perpetual subsidy to survive.

The only peeps I’ve been able to discern came from the SMH which published an editorial about the film industry and how Malcolm and his mostly boys were getting it wrong.  This was followed by a stern letter to the editor from industry veteran Anthony Buckley but nothing else.

Then there was a press statement from the Screen Producers Association which said “the fresh funding cuts to Screen Australia would affect innovation and the global competitiveness of the Australian screen production industry. For the third time in 18 months there has been a funding cut to Screen Australia. This efficiency dividend comes after almost $4 million was cut over the forward estimates earlier this year, on top of $38 million the year before. In the five years to 2018-19 this will total more than $50 million in combined cuts across budgets.

Far from recognising the personal hurt inflicted on his very own constituents, the PM, in a manner to which we are becoming increasingly accustomed when he has to deal with bad news, has said nothing indeed disappeared from the front and centre position leaving it to the already increasingly hapless Sco Mo to bluster about it all. That’s interesting and it’s not a tactic normally followed by any politician who smells that those closest to him, who might indeed affect his future quite materially, are not happy.  I know of at least one major industry figure, one of the PM’s constituents, who has written to him in outraged terms. I’m waiting to hear whether a reply will be forthcoming especially in these times when the art of letter writing to one's constituents has just about disappeared.
Posted by Film Alert 101 at 16:23