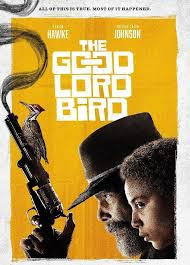 The Americans have a couple of descriptions that aptly describe John Brown, a man some believe started the Civil War – “God-bothering” and “batshit crazy”.

At least that’s the way Ethan Hawke - the show creator of The Good Lord Bird - plays the abolitionist Brown. So driven and unhinged is he, most of the African Americans he is trying to save from slavery won’t have anything to do with him.

As he quotes and misquotes the Bible and froths at the mouth while preaching righteousness and insurrection, he leads a small group of followers on murderous raids across Kansas, pulling slave owners from their homes and executing them.

He commands respect for his cause, but money-raising and recruiting drives to the north have more abolitionists avoiding him like the plague.

By the time he reaches Harper’s Crossing and overtakes the greatest armory in the country, he still thinks the “bees” are being “hived” so that thousands of slaves will join him to create revolution.

He’s not exactly left on a raft floating down the Amazon with a bunch of monkeys, as was Don Lope de Aguirre in Herzog’s Aguirre, Wrath of God, but his derangement and religious psychosis have many similarities.

And like Klaus Kinski, Ethan Hawke has created a role that allows him to break the borders around his character and deliver an unconstrained version of Brown. It’s a performance that will sit in his curriculum vitae the way Kinski’s aberrant wrath-of-god is remembered.

Yet, he isn’t the main character. That is left to Henry Shackleford (a wonderful performance by Joshua Caleb Johnson), who is known throughout the series as “Onion”. He’s a shoe-shining orphan that Brown has adopted and having mistakenly decided he is a girl, Brown puts Onion in a dress.

Onion happily accepts this disguise, figuring a black girl is better off than a black boy in slavery times. And every black that Onion meets knows he’s a boy almost straight away, but keeps this secret from the whites who are stupid enough to accept his feminine gender.

Most of The Good Lord Bird is played as farce. It doesn’t have the wicked, laugh-out-loud race relations humour of last year’s Dolemite Is My Name - slavery and the coming Civil War preclude that - but the consistent absurdity helps to underscore this lacerating vision of America’s systemic racism.