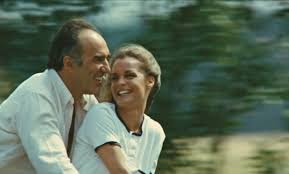 A mainstay of high-quality French cinema from the mid-1950s to mid-1990s, Claude Sautet’s career was always influential.  Films like  The Things of Life (1969) were trend-setting international art house hits. He was closely associated with the careers of some of French cinema’s acting icons; especially Romy Schenider, whose  five radiant performance for Sautet  (who claimed her on-screen presence was an entree  into  "an intangible and better world’)  are the centerpiece of her final decade of work.  0

But there’s never quite been enough consensus around Sautet’s body of work for individual critics not to announce his ‘rediscovery’ every few years. Sautet’s uncompromising, stop-start — but also generous — career path partially explains this. In the late 1950s and early 1960s he made emotionally and politically-charged  ‘série noire’ thrillers, influenced by  his friendships with director Jean-Pierre Melville and actor Lino Ventura.

From 1969 until the 1983, his  collaborations with actors Schneider, Michel Piccoli and Yves Montand  pinned-down the crisis in 1970s  French middle-class values with some of the same frank insight that the  ‘Poetic  Realist’  films of Jean Renoir, Julien Duvivier and  Marcel Carné had brought to the hubris of 1930s France.

Finally, from the late 1980s, there are the three art house hits Sautet made in a lighter, comic, but also  autumnal tone, exploring loneliness and disconnection. The gaps in between were never empty. François Truffaut once called Sautet the  ‘fixer’ of French cinema, and he worked constantly as a credited scriptwriter and uncredited , go-to script-doctor for other. filmmakers. But at least twice — in the early 1960s with the coming of the French  New  Wave, in the 1980s after a series of box office failures — he seemed to retire, feeling out of step with audience and critical  taste. But in the 2020s,  the  co0nsistency and insight  of  Claude Sautets work is clear. His fourteen feature films constitute a Balzacian chronicle of the lives and manners of the French middle classes, in a world where  love and emotion are frequently difficult.

Sydney’s pre-eminent cinephile David Stratton has long been a champion of Sautet’s work and during his years as Director of the Sydney Film Festival selected many of the director’s films for inclusion in the festival program. Among David’s favourites is the first film in the season at the Ritz Les Choses de la Vie/The Things of Life.

David Has sent through his thoughts on the film for onward dispatch to Cinema Reborn supporters:

In Les choses de la vie, Michel Piccoli plays a middle-aged architect who, despite the fact that he is married, is involved in a passionate affair with a younger woman (Romy Schneider).  Sautet, a master at delineating the manners and mores of the French middle class,  transcends the clichés inherit in that scenario by revealing the story of its flawed yet likeable protagonist at exactly the moment he is involved in a brutal car crash while driving at speed along a country road, a brilliantly-staged sequence that is shown several times in different forms – slow motion, full speed, etc.  Piccoli and Schneider give great performances, with Lea Massari also impressive as the wife.  Like all of Sautet’s films Les choses de la vie makes you care desperately about the characters, despite the fact that they are prone to making serious, life-changing, mistakes.

The screening will be introduced by Janice Tong a cinephile and one-time film scholar who has written a major study of Claude Sautet published on the Senses of Cinema Great Directors list. By day Janice is the commercial director for a tech media company, by night she enjoys watching films and good British crime dramas. She also has a particular interest in French and German cinema."