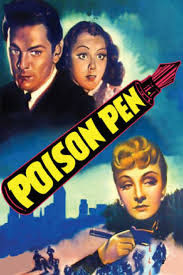 As I've already observed, Nine Gem is still there pushing out old British movies that we didn’t want to see half a century back. However, if you ignore Tommy the Toreador, the combined works of Cecil Parker and the rest, they do occasionally come up with something of interest.

Totally out of step with the work being done around it, this one was a full on rejection of the British coziness of its day, while Clouzot’s Le Corbeau, the much better French film that it anticipates (compare their shock church sequences) fitted right into Occupation France.

Poison Pen kicks off with village matriarch Flora Robson, sister of the vicar, buying a lollipop to replace the one the little boy has dropped outside Edward Chapman’s village main street store and Post Office. Flora is organizing the locals for the Church Restoration Fund Dance that night. Her ward, Ann Todd, got up in a distracting attempt at fashion outfits, is being moved on by Cyril Chamberlain, who is put off (film’s first close-up) to find she is going to marry her fiancé Geoffrey Toone coming back from Australia after a year. The locals gather round the Post Office switchboard to listen in when his call is put through.

We glimpse them being good-natured (“not a hint of scandal about anyone”) and then the Poison Pen letters, which we never see, start arriving - all alleging sexual misconduct. In the film’s most disturbing stream, they articulate the no smoke without fire message. Even The Reverend Reginald Tate, who is trying to be the voice of reason, comments on the letter he received “I opened it like everybody else.” Soon a female lynch mob starts hounding “foreigner” (someone not born in the village) Catherine Lacy as the suspected writer, Robson sending them on their way with the rough edge of her tongue.

Brutish Robert Newton is particularly disturbed by allegations that his pregnant wife Belle Crystall (the 1931 Hindle Wakes, Michael Powell’s Edge of the World) is involved with cheery shopkeeper Chapman. Tate tries to calm Newton’s fears. However, after a few pints, (“fair staggering he was”) he breaks out the shot gun.

Inspector Charles Mortimer of the Yard and freaky hand writing man Roddy Hughes, whose analysis of the calligraphy proves unnervingly accurate, crack the case which has generated madness and suicide. The division of privileged class characters like Colonel Athole Stewart and Mary Hinton ’s families and the servile regional accented proles (“Miss Mary bay’nt at home”) is particularly disturbing here.

This is probably the busy Paul Stein’s best film. He’d been good for two or three productions a year from his 1918 debut, moving from Germany to Hollywood with a range of celebrities fronting his cameras - Pola Negri, Raymond Massey, Basil Rathbone, Doug Fairbanks Jnr. Jeanette McDonald - without being responsible for anything conspicuous.

Here his straightforward handling proves telling, though the film is still occasionally rough - bad matching on close-ups, lighting units throw shadows on trees out of doors. A strong selection of long serving British character players carry the load, the ubiquitous Chapman or Newton managing to ham his way to prominence. Edward Rigby is in there too and Poor Belle Crysal is once again wasted. Wilfred Hyde White’s brief cameo as the village postman no less, calmly explaining regulations, is nicely comic sinister.

Pity the mystery element is sacrificed too early, taking away any surprise impact. The piece has the feel of a West End success, building to Robson’s third act monologue set piece (“Year after year ... I’ve had no child of my own”) to get spontaneous applause from the stalls. This curiously is the most filmic passage, with its ghost mirror recriminations, though these are not particularly well staged. Her strong performance and the discordant subject matter are the film’s strengths. There’s the unnerving moment of her stepping back from the church door to reveal full choir practice. However, it’s Poison Pen’s sinister contemporary subject and its disturbing view of the elements of British life that were taken for granted in other films which makes it notable and give it it’s small enthusiast following.

Also in the nine Gem line up was the more celebrated Hue and Cry directed by Charles Crichton in 1947. At this distance, it becomes uneasy viewing -  like a threepenny British comic (which still costs 2d here) that has got mixed in with contemporary work like the Alf Sjöberg Hets and “Rubble Movies” like Germania Anno Zero. Throw in “Emil & the Detectives.” 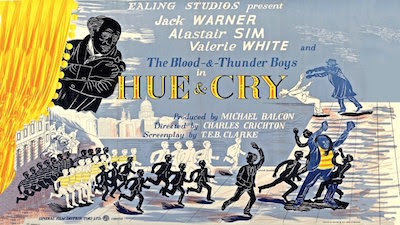 Plot has the London kids gang (token girl) gathering in a bombed out tenement to figure out that the serial in the Trump kids paper is a coded message to a gang of robbers. The vignetted "thinks" inset of the Comic Adventures proves a misleading hint of style in something where the exteriors look like they come out of a documentary on post war hardship.

The coppers take a dim view of being called out on the gang’s imperfect attempts to thwart the crooks. ("I dun a bit of good for that detective inspector") Paul Demel the furrier,  distracted by their rock through his window, turns out to have furs in the cases that the serial describes as containing bodies. The Oxford Circus department store that they hide in to catch the heavies, fills with plainclothes police and watchmen and the kids only get away through the obviously studio sewers where one's uncle used to work - resurfacing when the radio car called to apprehend them, drives off the man hole.

They approach writer Alistair Sim up his sinister, cat inhabited stairs and find that his serial is being corrupted. However, Covent Garden fruiterer Jack Warner, with whom Harry Fowler has been placed, is not what he seems. The kids intimidate his blonde office girl side kick with a white mouse and, using a bogus BBC news item, get all the boys of London to stream over recognisable streetscapes and join in the scrap with the heavies.

This one is a more damning account of Austerity Britain that was intended. None of the working class kids have any interest in higher education. The lead, in his unwinding pullover, sees a five a.m. job carrying fruit baskets on his head with a sack

draped over his shoulders as social advancement. The East End gang is sniffy about a toff from Camberwell whose accent proves as broad as their own. Parents are a nagging marginal phenomenon. Another parson is a dour type who throws the comic out of his choir practice window.

The endless, bombed out streets and ugly fashions clash with the Boys Own adventure the film wants to evoke. The comedy of dotty writer Sim blackmailed into the kids’ scheme is at odds with the realist, violent outcome of the Jack Warner plot. Well, at least the kids are the right age. Curiously none of this wave of new talent went on to achieve.

The film is represented as the first Ealing comedy which is a bit much. George Formby among others had been based at Ealing. It does introduce comic elements into the producer Michael Balcon - writer T.E.B. Clake collaboration which would include successes like Passport to Pimlicoand The Lavender Hill Mob but really it comes closer to being a template for the (drear) Children’s Film Foundation with child protagonists in an adult scenario. Sim’s performance and a lively score by Georges Auric, then becoming the sound of the art cinema with his Cocteau collaborations, out class the other elements.

It’s curious to be faced with this one again after a lifetime and find it is a more revealing, more flawed piece than my memory of it. 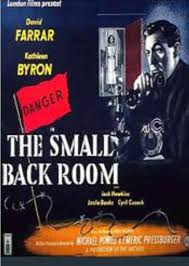 And then they came up with 1949’s The Small Back Room which I hadn’t seen since the fifties when I bullied the Sydney Film Society into running that one sixteen millimeter print which was all that was left of its half-hearted release here.

This was the peak achievement for Powell & Pressberger’s Archers group and when Michael Powell  surfaced here, kick starting Australian feature production in the sixties, he confirmed that it only came about when they wanted something acceptable to redeem the failure of The Red Shoes in Britain - before that one became the smash hit in the U.S. where it was the then biggest earning British film.

David Farrar, fresh from the Archer’s splendidly exotic Black Narcissus, is Sammy Rice, a Whitehall boffin in Prof. Milton Rosmer’s department. He’s dogged by alcoholism, a painful tin leg prosthetic and bureaucracy represented by former ad-man Jack Hawkins whose expanding office has consumed half the window of Farrar’s lover, secretary Kathleen Byron. A bureaucrat opportunist ends up paying for lunch and clerk Cyril Cusack is having trouble at home. The department’s standing comes to rest on the success of the new Reeves Gun in which Col. Leslie Banks sees “user problems.”  As if Farrar’s life wasn’t already complicated, Michael Gough involves him in dealing with a new German booby trap which may be got up like a Teddy Bear (“Jerry’s like that”) because it keeps on blowing up children.

There are a few digressions like a comic visit by uncredited Robert Morley or barman Sid James refusing Farrar when he’s drunk and aggressive, leading to an “expressionist” nightmare with a giant bottle. Key scene proves to be a committee meeting with Farrar passing a note to his team spokesman which demolishes the other lot - the kind of thing Ken Loach was forever trying to make dramatically potent. Byron walks out - taking the cat - and then the phone rings and its Gough on the line.

The segment on the wired off beach is instantly recognisable as Michael Powell - Farrar and Anthony Bushell’s lot striding past the old stone church - leading to still one of the best suspense sequences in film. Renée Asherson’s brief scene, reading back Gough’s notes is extraordinarily potent.

Follow that if you dare and they can’t quite manage but the ending is still involving. It features a pared down, Pinter-esque key exchange with Banks enquiring about Bushell. “What did you make of Strang?” “He’s alright’’ “That’s what he said about you.” Powell prefered Banks’ “This war will be won by the army, the navy and the airforce - in that order.”

The film remains the best of all those Britain at war movies in which we recognise the girls dancing with men in uniform, taped windows and ugly fashions. Dark Passage from the same era (filmed 1947) is the only other film I recall where the small parts register so vividly - right down to Clancy Cooper stopping Bogart on the street in that genuine David Goodis moment. You have only to look at London Films other British Nigel Balchin adaptation, Anthony Kimmins’ Mine Own Executioner (1947), which Nine Gem occasionally airs, to see The Archers’ achievement. How Powell & Pressburger managed to get things so right is something which I suspect puzzled them too. When British Cinema has so few exceptional works it's a great shame to sideline this one.