The Belgian director Harry Kümel (born 1940) had been making movies since the 1950s before he hit the headlines internationally when his 1968 Monsieur Harwarden played the rounds of various Film Festivals, including Sydney and Melbourne, to considerable acclaim. Here was a new ultra-stylish auteur breaking onto the international stage at a time when all around him the new national cinemas (Cuba, Poland, Iran, West Germany) were swirling into view.

He filmed a short dedication to Sternberg in 1968 with himself and Jo not long before his death, talking about Jo's movies, and this short has been wrapped into Criterion's disc of Docks of New York. Indeed, the ghost of Sternberg informs his 1971 Daughters of Darkness.

In 1971 Kümel delivered this breakthrough, a Dutch/French/German co-production shot in English - a lesbian vampire movie, already an established horror subgenre, and a springboard for the incredible Daughters of Darkness, aka variously Les Lèvres Rouge, Les Rouges a Lèvres and other miniature gallic puns on "lips", "labia" and "Lipstick”.

The movie opened outside Europe in late 1971, and I managed to see it while I was staying in New York City in early 1972 at one of the the still standing 42nd street movie palaces. This one was resisting the newly minted hardcore porn mode while dedicating itself to grindhouse fare. Daughters was playing a double bill with a German sexploitation Costume horror called Tower of Screaming Virgins, (directed by Franz Antel) the plot loosely based on a Dumas novel, but with tits and blood quotient surpassing anything I'm sure Dumas might have hoped for. Tower was actually interesting enough in its own right, (I never look down on honest trash), but the main event was Kümel’s movie which alternately bored and exhilarated the audience, with enough explicit blood and sex to keep them awake.

The movie sings with its brilliant production design and the intelligence of the screenplay, not to mention wardrobe by half a dozen people, although Kümel surely dictated all the details of Delphine's small number of costume changes, alternately feathered, furred, metallic, gauzed, worn by Delphine in full bore homage to Travis Banton and of course Sternberg. Delphine's first big entrance to the Ostend Hotel at midnight is executed with a walk that is never mere walking but swagger, saunter, swoon and arch. 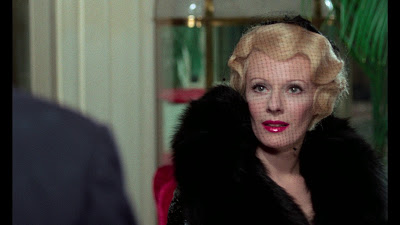 By the time Kümel shoots Delphine’s first close up (above) he takes us on a journey across her face. If you can, remember Dietrich's high precision eye and mouth movements, head turns, pauses and gazing into keylight during the "It took more than one man to change my name" moment from Shanghai Express. Delphine inherits that sequence's facial acting and takes it to the next level by adding Dietrich's first entry into the upper class brothel in Angel, although in Kümel’s movie she's now wearing scarlet red with black furs and a lace fascinator.

The seemingly impossible achievement of this movie is to never succumb to "mere" camp. The elements of disguise, character and setting are never less than multi layered with reflexive aspects, from the white and black and red color Nazi uniform coding of Christina Rau’s Louise Brooks-esque goth companion to Delphine. Down to the Banton and Sternberg stylization of Delphine's look and performance. Kümel himself says partly in jest during his commentary track on this new disc, that his producer felt this was Delphine's best role. In fact it is but, as Harry says it's one of so many. Her Muriel and the "woman" in Marienbadfor Resnais, her Jeanne Dielman, the lady who lunches for Bunuel in Discreet Charm, her murdered lover in Zinneman’s Day of the Jackal. 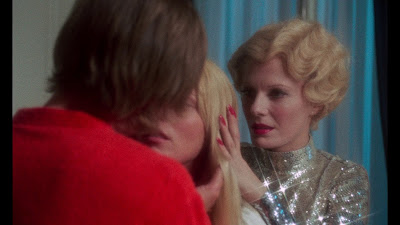 It has to be said Delphine is an axiom of cinema. And with Kümel she meets one of the movies' last great stylists. For the uninitiated the last screen is "Mother", a rich old queen who outlies the narrative, played by the great Dutch filmmaker, Fons Rademakers (below) wearing far too much eyeliner, mascara, hair dye and foundation, and a particularly unattractive lippy. 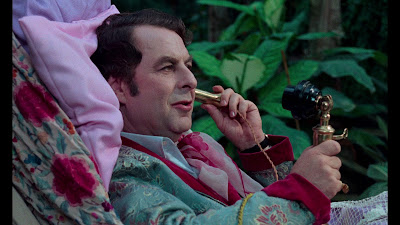 So the Belgians do have a sense of humor.

The title has been given a full blown multi disc release by the people at boutique horror label Blue Underground. The movie was restored from a previously lost 35mm O-Neg with supervision by Kümel, and the boxset includes the title in full 4K UHD and Dolby Vision, as well as a regular Blu-ray. I have only been able to access the latter for this review but frankly the image quality and encode are so fine I doubt there is much uplift for improvement left for the 4K disc.