The final film in the retrospective of Jean-Pierre Melville’s work screening at the Ritz Cinema Randwick is the director’s last film, a return to his great theme of the ambiguous relationships between crooks and cops. After playing a crim for Melville on two occasions (Red Circle andLe Samourai) Alain Delon takes the role of the cop tracking down the perpetrators of a violent heist.

Professor Adrian Danks, probably Australia’s most knowledgeable authority on Melville’s work, describes the film as  an ideal - if bracingly pessimistic - final testament. Opening with one of the greatest sequences of the director’s career, a brilliantly atmospheric and typically elemental seaside heist, it provides a distillation of Melville’s career and his characteristically obsessive preoccupations. A melancholic and metallic blue sheen imbues the film and its characters with a death-like pallor fully appropriate to this fatalistic tale. It focuses on the relentless pursuit of criminals and the close bond between the almost somnambulistic detective (Alain Delon) and the chief suspect (Richard Crenna). With Catherine Deneuve. 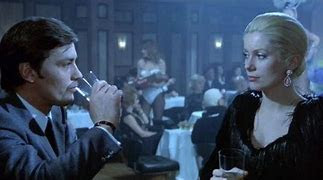 One of the film’s great supporters is the esteemed film critic of the Los Angeles Times Kenneth Turan who wrote: The air of compelling melancholy that hangs over all of Jean-Pierre Melville’s classic policiers is especially inescapable while watching his 1972 “Un Flic.” This was the last film the director finished before dying of a heart attack at age 55, and it has many of the traits that have made him a favorite for fans of crime films in general and the French variety in particular….

“Un Flic” is a pleasure to experience. As with all the director’s works, it believes in the connection and complicity between cops and criminals and introduces us to individuals with names such as Matthew the Suitcase, hard guys who haven’t smiled since Paris was liberated. In other words, it takes us to Melville’s particular world and makes us glad to be there.

Un Flic will be introduced by Margot Nash: freelance screenwriter, director and script editor,  Honorary Associate, in the School of Communications at the University of Technology Sydney.