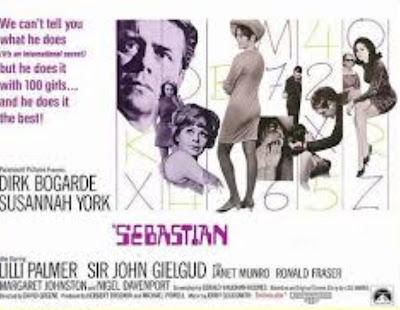 In the early seventies I lived on Park Walk in London’s SW10. My flat in declassé Fulham looked down into trendy Chelsea, across a street that, in cultural terms, might as well have been a mile wide.

Punk’s day was not yet, however. King’s Road still belonged to the Sloane Rangers – coltish twenty-somethings in kitten heels, berets, and Mary Quant pastels. A few drove Minis or 2CVs. Others went retro, like Susannah York (below) in David Greene’s 1967 Sebastian, who whizzes around in a ex-US Army Jeep – with white-wall tyres, of course. 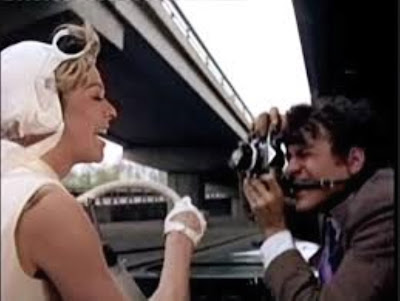 The cliche of a film with another inside struggling to get out actually applies to Sebastian. In quieter moments, you can almost hear the original banging on the walls. Michael Powell intended to direct Leo Marks’ script as a successor to their ill-fated collaboration on Peeping Tom. Their names remain as perfunctory credits only, to Powell as co-producer and to Marks for Original Story.

Some of what they planned for the film can be inferred from a contemporary plot summary that speaks of “a stylish espionage thriller about code-breaking” with “stark Orwellian visions of London.” Marks drew on his wartime espionage experience but also referenced the real-life story of Alan Turing and his marriage of convenience to a fellow codebreaker at Bletchley Park.

The story would be told effectively by Robert Harris in his novel Enigma, the basis of a flaccid Michael Apted film, and more poignantly in The Imitation Game. Sebastian runs it through Hello! magazine, with an injection of Footballers’ Wives. Sebastian (no last name), a former Oxford don, sexless, ascetic and intellectual, directs Britain’s Cold War code-breakers. He falls for one of them, an affair that humanises him, but also lays him open to betrayal and attempted assassination. He retreats to Oxford, only to find, on being brought back to London a year later, that the liaison produced a child. Transformed, he abandons ciphers for diapers, and thereafter decodes only the Times crossword.

Powell wanted Rex Harrison for Sebastian and, rather than the skittish York, a then-unknown Helen Mirren, whom he was to unveil – literally - the following year in Age of Consent. But producer Herbert Brodkin, inheriting the project, pursued Michael Caine for the lead - David Warner and Peter O’Toole were also approached – suggesting that he hoped to replicate Sidney J. Furie’s The Ipcress File, which exploited the seedy underside of swinging London, pitting Caine against both the Whitehall establishment and the world of commercial espionage.

Replacement screenwriter Gerald Vaughan-Hughes wrote Ridley Scott’s The Duellists but brought none of that film’s edginess to Sebastian. Instead, a farcially miscast Dirk Bogarde staffs his code-breaking team entirely with dolly-birds, selected, it seems, from among the shop assistants of Knightsbridge’s trendier retail outlets. He sets them to work with pencil and paper in a futuristic office high above a newly modernised City of London, where, as each cipher is solved, the happy cracker yells “I’ve got it!” in the best tradition of Saturday Night Bingo.

A few vestiges of the original survive – embarrassingly so in the case of Lilli Palmer who, a generation too old for her role, lingers because the story calls for someone with a political conscience to leak intelligence to the liberal press - clearly not an option for her fellow cryptanalysts, none of who could tell Marx and Engels from Marks and Spencer.

Sebastian typifies the throwaway society par excellence, yet, as Noel Coward observed, cheap art can surprise with its potency. One shot, of a quiet street corner in Belsize Park, sparked the memory of two beautiful young men in matching white suits, encountered there one warm Sunday morning during the otherwise drab Heath administration. John Kobal and Carlos Clarens, both stars of film scholarship (if such a stardom exists), were headed, like us, for a restaurant lunch. We paused for a moment to exchange pleasantries. Neither would live to be old, but, embedded in the amber of memory and otherwise negligible films such as Sebastian, they survive, forever young.