Streaming and on DVD - John Baxter ponders the lives of artists in the movies (REMBRANDT, LUST FOR LIFE, MOULIN ROUGE and more and more) 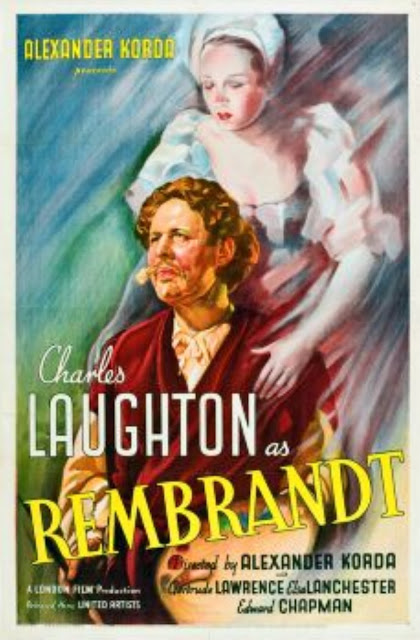 IS HEART WHERE THE ART IS?

“One Mad Moment of Love Brought Him a Lifetime of Fear!” The promotion line on the film poster swims out of a sea of languorous looks and Hollywood hair. “Give me a beautiful woman,” sobs the movie’s subject, “and I will make men worship and gaze on her forever!”

Call any historical figure to mind? Probably not the painter Rembrandt. Nevertheless, that’s how publicists sold Charles Laughton’s portrayal of the doleful Dutchman in 1936.

Even harder to recognise is the artist inspired by Gauguin in the 1943 film of Somerset Maugham’s The Moon and Sixpence. Its poster shows George Sanders perched in a palm tree, announcing “Women Are Strange Little Beasts!” The copy amplifies his point. “You can treat them like dogs (he did!) – beat them ‘til your arm aches (he did)…and still they love you (they did!) But in the end they get you and you are helpless in their hands.”

Have films improved in depicting the graphic arts? Not much. Even painter Julian Schnabel’s Basquiat was little more than a canter through the clichés of the Hollywood art biopic: garret; gallery; glamour; gutter; grave.

In a lucid review of that film, the late Roger Ebert pinpointed the problem with movie depictions of painters. “Anyone who has ever painted or drawn knows the experience of dropping out of the world of words and time. A state of reverie takes over; there is no sensation of the passing of hours. There is only color, form, texture and the way things flow together.”

Language, contends Ebert, resides in the left side of the brain, art in the right. “You can't draw a thing as long as you're thinking about it in words. That's why artists are inarticulate about their work. They have given it less thought than you have.”

Not overjoyed to find that the creative act cannot, by definition, be filmed, screenwriters, desperate for visual metaphors to explain the process, have annexed two impulses which display some of the same superficial symptoms - insanity and sexual desire.

Hence those movie artists from Michelangelo to Camille Claudel whom the movies have drawn as Passion’s Playthings. In Lust For Life, Kirk Douglas took Van Gogh between those fearsomely surgical teeth and shook him as a terrier does a rat. He became not so much a painter with a problem as a problem who painted, further establishing the image of the sad, contrite Vincent as a crazy coot who gave a girlfriend his ear.

Contemporary art doesn’t fare much better. Anthony Hopkins in Surviving Picasso was too busy manoeuvring Françoise Gilot and Dora Maar in and out of bed to put brush to canvas.  In Pollock and Love Is the Devil, the troubled personal lives of Jackson Pollock and Francis Bacon became not a by-product of their creativity but the motor of it.

Henri de Toulouse-Lautrec suffered more than most at the hands of the cinema. That his handicap explained his art was the central concept of Moulin Rouge – not Baz Luhrmann’s attenuated rock clip but John Huston’s Paint by Numbers biopic in which José Ferrer - “busily polluting the memory of Toulouse Lautrec,” in S.J. Perelman’s phrase - paints prostitutes not because they make interesting subjects but because a heartless model has him in thrall.

He receives more generous treatment – as do models - in Roger Planchon’s 1998 Lautrec. Régis Royer plays him as a sweet-natured man with a capacity for pleasure that keeps at bay the misery of his affliction. His Lautrec is neither desperate nor unloved. Rather, Royer and Planchon suggest that his good nature, obvious talent and aristocratic heritage made him something of a babe magnet. When the art school model discovers he’s a virgin, she offers to correct this at a time of his choosing. “After class,” she suggests,  “or tonight, or tomorrow morning...”

Planchon avoids addressing the roots of Lautrec’s creativity. Instead, with an eye to what the French regard as truly important, he probes his aristocratic lineage. His father, the count (Claude Rich), who greeted his birth with fireworks and a fanfare of trumpets, retreats into hunting and whoring out of guilt at having, by marrying his first cousin, fathered a crippled and sterile heir. Far from skulking in the shadows, however, the count roisters noisily in the same fleshpots as his son. Planchon even has them meet by chance in one of Paris’s better brothels. As Henri sketches two ladies entwined in a lesbian embrace, the count bursts in with some English friends, only to retreat in confusion, pausing to observe to his son “I was happier when you were drawing horses.”

Is there a film which makes a credible case for insanity or sex directly inspiring a work of art? One at least comes to mind. In Martin Scorsese’s Life Lessons, written by Richard Price for the 1989 New York Stories, Nick Nolte plays Lionel Dobie, a painter running late with work for a big show. But the looming deadline, far from paralysing his creative muscle, pumps it up, augmented by the jealousy that oozes like acid from a deteriorating relationship with his young apprentice and mistress (Rosanna Arquette).

Having urged her into taking another lover, Dobie watches them enter her room and close the door. Then, winding up the stereo to toxic level and shooting occasional tortured glances at her window, he – or at least Chuck Connelly, who did the actual painting - assaults his giant canvases. Squirming impasto, ejaculating tubes of pigment and frenzied stabs of the brush leave no doubt what’s on his mind.  For a moment, some talented creators make us believe that life may be transmuted into art.