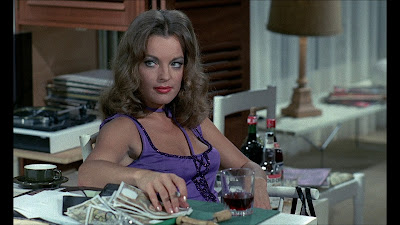 Max and the Junkmen has had very few, if any, theatrical screenings in Australia. It remains one of Sautet’s most elusive titles. It was largely ignored outside France for decades. In the USA it was not shown at all until 1993, some twenty plus years after it was made. When it premiered esteemed critic for the Los Angeles Times Kenneth Turan welcomed it with open arms. Below are some extracts from his review.

Sautet’s first success as a director came with a cops-and-robbers gem, a 1960 policier called “Classe Tous Risques.” The polished, assured “Max and the Junkmen” is very much cut from the same cloth, but the specific qualities that make it strong — its bleak, melancholy tone and the way it veers toward the tragic — probably kept distributors away from it back in 1971.

Because Sautet was a filmmaker who was drawn to complex psychological situations, “Max and the Junkmen” (“Max et les Ferraileurs” in the original) is no ordinary crime film. It’s also a finely drawn character study that is fascinated by the nuances of personal behavior and, in Michel Piccoli and Schneider, it had the actors to bring it to life.

Piccoli plays Max, a Parisian detective who, as his superior says, is “no ordinary policeman.” Not only is he independently wealthy — his family owns a vineyard — but he is a former examining judge who left the bench because he wanted to take more of a hands-on approach to crime.

The film’s early sequences show Max, played by Piccoli with an icy, almost monastic hauteur, increasingly frustrated by a class of bank robbers that seem to be too smart to be caught in the act.

Frustrated by the powerlessness of the forces of law and order and the obtuseness of fellow cops who don’t care as much as he does — “scum on the one hand, fools on the other” is how Max describes his situation — the policeman becomes obsessed with the notion of capturing bank robbers red-handed, thus insuring that they cannot escape the punishment of the law.

Max’s way into the gang turns out to be Lily, a prostitute who also happens to be (a gang member’s) live-in girlfriend. As played by Schneider (pictured at top) at her most radiant, Lily is the de facto queen of this genial band of outlaws (the criminals in this film have a lot more fun than the lawmen), but her ambition also makes her vulnerable to Max’s machinations….But this relationship becomes increasingly complex in ways neither Max nor Lily anticipates, leading to consequences no one can foresee.

Sautet, who co-wrote the film from a novel by Claude Néron, is completely at home in this down-at-the-heels milieu. Francophiles in the audience will welcome a return to a Paris where hard guys smoke Gitanes and oversized francs are still legal tender, but everyone will appreciate a film so sure of itself and so good at what it sets out to do. 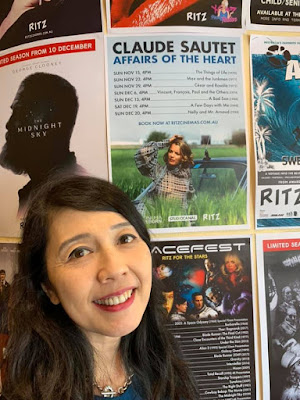 The screening will again be introduced by Janice Tong (pictured above at the Ritz) a cinephile and one-time film scholar who has written a major study of Claude Sautet published on the Senses of Cinema Great Directors list. By day Janice is the commercial director for a tech media company, by night she enjoys watching films and good British crime dramas. She also has a particular interest in French and German cinema.

Restoration of the film has been done by the distributor StudioCanal the company supplying all seven titles in the Sautet season.  The restoration has been released on Blu-ray in France and when it appeared cinephile David Hare applauded  its superb grading, grain management and colour balance. "Not only is this a game changer for the first (official) disc release of Max with English subtitles, it is also one of the best rendered reissues of any Sautet out there. The restorers created a new inter-positive - a process similar to what Warner MPI does with all its new 2K or 4K masters for the Warner Archive label. In addition to original work including scanning done by Lab Eclair, further work for DCP and production of HD disc masters has been done by a new post house, VDM, an outfit new to me."