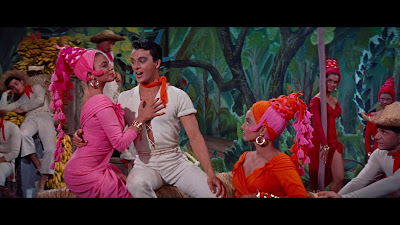 The girl on the right of Jerry Antes (above), who's singing "Yellow Gold" (the Banana Song) is none other than Joan Collins in deep Egyptian dusk makeup, rebirthing the Crystal Allen role played by la Crawford for The Women from 1939. On Mr. Antes left is a genuine musical performer, Carolyn Jones. The movie here is The Opposite Sex from 1956. Screen here is from Warner Archive’s stunning new Blu-ray.

This would not be the last time Ms. Collins played a character called Crystal. In a life littered with jewellery there must always be a first, and unlike her doomed wife in Hawks' extremely camp Land of the Pharaohs, she survives in this one.

Directed by a reliable and sometimes stylish David Miller with producer Joe Pasternak for MGM, the studio reprised its rights to the Clare Booth Luce property which Cukor brilliantly filmed as the Women, in that regime with no men present. The Opposite Sex thus joins the ranks of other musical rehashes of older stage properties including the Barrie Philadelphia Story which was rewritten as High Society. That latter film shines more musically than The Opposite Sex, given a high level music score and male cast including Crosby, Louis Armstrong and "Blue Eyes" Sinatra. All strung together neatly by Charles Walters, ever a deft hand with musical numbers. Where The Opposite Sextakes off in an interesting even unpredictable direction is the female cast which was the Eisenhower era's answer to the class mix of women, and the relative sluttiness of the two cheetah dames, and possibly others played so incomparably in the original movie by Joanie and a feline Paulette Godard. This at the very least features the outrageously voluptuous Dolores Gray as well as nods to older greats from the genre including Ann Miller and Joan Blondell.

And another notable, as always for Warner Archive Blu-rays, color image, in this case filmed in MGM's proprietary Eastman stock, Metrocolor, which in this picture adopts a lurid scheme of acid and secondary palette that resemble the mercifully abandoned garishness of the doomed Anscocolor so beloved of Minnelli for a couple of years in the period after three strip filming ended. The IP or whatever the element used by Warner for this Blu-ray encode is yet again brain snappingly brilliant, indeed one wonders if the Inter-positive used was a first gen dye transfer Technicolor lab reference print.

Recommended, if only for the addicted.