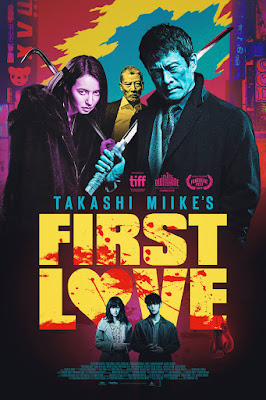 Takashi Miike’s  Hatsukoi /First Love  has landed in a few circuit theatres, which is worth a comment in itself. We usually have to rely on trash movie events and physical media to keep up with its director’s efforts. I saw it a couple of years back at the Paris Étrange Film Festival.

The film shows Miike in top form - pity someone didn’t say when. We start as we mean to go with boxer Masataka Kubota working out with ear ‘phones & in the ring putting the lights out for his opponent - cut to the severed head of a Filippino gangster hurled into the street still grinning.

A deluge of sub-plots follows - girl junkie Sakurako Konishi isn’t cutting it as a whore paying off her dad’s debts. The specter of her old boyfriend wearing glasses under a bed sheet haunts her. The Yakuza boss comes out of jail and one of his soldiers plots knocking off a drug haul in association with a crooked cop, taking the girl along (don’t ask).

The boxer collapses in the ring when he has the match sewn up, to his manager’s exasperation, and he’s told he has a fatal tumor. This makes him indifferent to death, and has him downing the girl’s menacing pursuer. In the street, taking out the courier sets off the gun in his pocket injuring his attacker.

The madam, who packed the girl off and was into kicking her around, becomes distraught at her fate, bursting into the gang boss’ dignified meeting and the lead couple is located by the Satnav ‘phone she was given by her operators, while the Chinese opposite number becomes involved along with a one armed swordsman whose provenance escapes me.

The boxer is let off, as a matter of respect, because he’s not in the Yakuza, and the film loses impetus as his fate becomes less dire. We’ve still got a jump over the massed cop cars and taking the girl to shower at a pool with them sopping wet when they meet the rival boss with his pregnant girlfriend at a rail crossing. The pair are solicitous and take them home to dry out.

After all this frantic activity the finale’s routine domesticity is unexpected.

First Love has striking concepts, even if it can’t keep up the pace - sheet man, that only the girl can see, dancing to the head phone music in the subway train, the sword waving Madam and even giving the gangster driver a blow job while he’s at the wheel recalling Ringo Lam’s splendidly ferocious 1993  Xia dao Gao Fei/Full Contact.

Seeing this is one of the better consequences of the lock down era product shortages, a rare big screen glimpse of the prolific and outrageous Miike in full flight.

First Love  is screening in three cinemas in Sydney at least for the rest of this week, i.e. till Wednesday. Check session and location details if you click here first love movie