A French Tribute to Bertrand Tavernier by François Forestier. 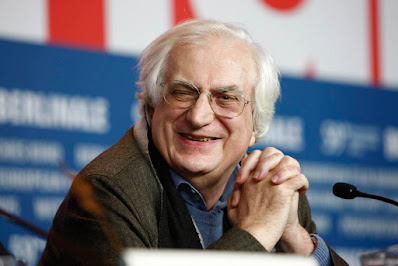 He had a loud voice, a militant sentimentality, and cosmic erudition. Bertrand Tavernier, if you met him in the street, was likely to extol a dish of roast pork with prunes, assess the latest best-seller, praise the camera movements of Douglas Sirk, evoke the soul of poets, and speak of Lyon, his place of birth, which he called, with a laugh that belied everything, "that city of mist and lies". But it was a childish kind of lying, he said, of which he himself was the heir, because what is fiction if not a magnificent lie?

His strength of conviction emerged in a torrent of words which he framed with the gestures of a conjurer, for his hands had the grace of a prince of the church. His passion for cinema constantly stirred him up, and, having become a director, he unleashed salutary, memorable anger at the injustice of the world and the evil of the times. "I am perpetually indignant," he said, not without regret: he would have preferred to be a contemplative of the Renaissance, which in some ways he was. He only needed the right century. Luckily for us, he was born during the century of cinema.

You should have seen him, at the end of the year, shortly after Que la Fête Commence,  one of his most successful films, in front of a golden Butterball turkey, sharpening his knife, holding his guests in suspense with stories about Richard Brooks or Michael Curtiz, while in the background we could hear John Coltrane's last concert at the Olatunji Center in Harlem.

You should have seen him, index finger raised at the presentation of the Césars - he had just received an award, was it for Capitaine Conan? - reminding a whole elegant room and, indeed, the entire world that there were still people, outcast and rejected, who had to be helped.

You had to see him, delicately taking the book handed to him - in this case the thin volume, bound in vellum, of Pierre Bost's Monsieur Ladmiral va bientôt mourir - in order to smell it, caress it and, ultimately, film it as Un Dimanche à la Campagne.

Theater producer, talent scout, adventurer in the lost lands of cinema, Bertrand Tavernier was never so moving as when he spoke of his father, René, whom he evoked in his marvelous documentary series, Voyages à travers le cinéma française. The trouble was that each conversation with him resulted in the immediate purchase of dozens of DVDs and armfuls of books. His culture was communicative and his enthusiasm contagious. When Clint Eastwood, in the Warner's private jet, asked aloud, "What was the first color movie?", nobody reached for a history of cinema. The answer was more simple. “Ask Tavernier.”

He had so much to tell. His most beautiful, most terrible, most poignant film is La Vie et rien d’autre, a masterpiece of humanity set in a nation devastated by the war of 1914/18, where a commander, played by Philippe Noiret, is responsible for identifying the soldiers engulfed by storms of steel.

With his bear body and large size, Tavernier moved better in the past (Le Juge et l’Assassin, La fille d’Artagnan, La Princess de Montpensier, Laissez-passer) and in the dark world (L'Horloger de Saint-Paul, Coup de Torchon) than in the future. Nevertheless, he tried his hand at science fiction with La Mort en direct. He filmed it in Glasgow, a city ravaged by industrial misery, using its City Hall, one of the rare buildings to survive a past of opulence. "Did you know," he said, "that this building is entirely lined with marble, on all floors? So the cellar ceiling is four meters thick to support the weight?” And with a nod of his head he indicated to a now-apprehensive Romy Schneider that he was ready to shoot.

This attention to detail defined him; this precision in directing was his magic. The tiny and the huge, the mundane and the visionary at the same time.

He had been a critic, press attaché, actor, producer, and author of some essential  books , including Thirty Years of American Cinema, which become Fifty Years, with Seventy Years in preparation.  Yet "I would have liked,” he said once, “to carry Verlaine's suitcases," a comment that reflected his deep sense of justice - and of poetry. In Sainte-Maxime [a Mediterranean town near St Tropez] , where he had retired during the pandemic, to work on his autobiography - he had so much to tell! -  Tavernier inhaled the air of tranquility, when he was actually a man in tumult.

My last vision: in his rumpled military jacket, a little stooped by the weight of his bulging carrier bag, he moves away, on the quays, in a mist of the end of the day, towards the Pont d’Alma - just an ordinary old bugger, who was also a colossus who ate film and spat fire but dispensed sweetness. As a newspaper seller distributes a daily newspaper with bad news, Tavernier turns around, shakes my hand, puts up his glasses, points to the Seine .....and this is the last image I have of him. It hugs my heart.