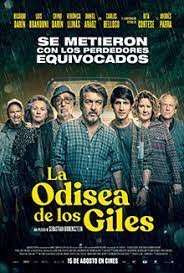 Well we’ve gotten through this year’s Spanish Film Festival and I could recycle the comments I made on previous events - films better than the ones we get in other distributions on the evidence of cherry picking the program because time and cost made it too demanding to do it full justice.

Not surprisingly the most endearing item was Argentinian, La odisea de los giles/Heroic Losers, another piece from star Ricardo Darin and director Sebastián Borensztein, a superior caper comedy drama in the impressive line of the team’s 2016 Kóblic/Captain Koblic and their 2011 Un cuento chino/Chinese Take-Out.

In the new film, everyone is doing it tough in run down Argentinian town Alsina, where the train doesn’t stop anymore. One time local soccer hero Ricardo has a plan to revive the closed down grain storage facility, save handling costs on the crops and create jobs. He persuades his none too bright neighbours to put their savings into the scheme. “We couldn’t be doing any worse.”

However, the crooked bank manager and sharp lawyer Andrés Parra manipulate the restrictions of  the Argentinian financial crisis Corralito to make off with the savings of Darin and his neighbours, moved from their safety deposit box into an account which is impounded.

So far so so but a vividly filmed car crash changes the direction of the piece. The victims learn about Parra’s state of the art vault concealed in a cattle pasture.

Characters whose interests run to fishing with dynamite, painting the deserted rail station and buying twin cell phones with no one to call, have to be marshalled into a sophisticated plot to get the money from the vault - out dated explosive, a remote control toy car and Darin’s son planted as a spy in Parra’s office, chatting up the secretary, along with a few hints from Wyler’s 1966 How to Steal a Million.

Their blundering attempts make them a kind of Hispanic Lavender Hill Mob and the film builds skillfully to the break-in, cross cut with the vengeful lawyer abandoning a society celebration to go racing to the scene, pistol in hand.

The audience I saw it with broke out in spontaneous applause. How’s that for an endorsement. This is a superior entertainment that should function in any release pattern. 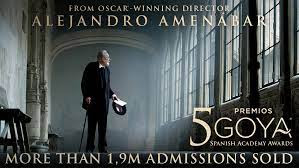 I don’t know that I would say that about Mientras dure la guerra/While at War,  which we are told is the first Spanish film from celebrity director Alejandro Amenßbar (Mar adentro 2004, Tesis 1996) in seventeen years. This one is packed with historical references that are likely to baffle someone who isn’t up on 1930’s Spain - Falangists, Royalists, Masons, Puritans, Legionaires, the Burgos Junta, the Marrocan colonies.

A car load of German Nazis is given minimal respect. Someone tells us that the BBC has just reported that Federico Lorca has been shot. Who is the character with the hand gun running through the Salamanca town square shrubbery as the Nationalist troops set up there?

Even from an imperfect understanding it’s still an impressive piece, realised on a large scale with convincing period detail.

Distinguished scholar Miguel de Unamuno, Chancellor of the University of Salamanca,  played by Karra Elejalde, is reproached by his politicised daughter for making a half year salary donation to the soldier's fund but he still  keeps the company of a Protestant Cleric and a young leftist, taking coffee with them when the streets are full of trucks of soldiers firing into the air. Nothing is clearcut, with the menacing young black shirt turning out to be an autograph hunter fan.

However, in parallel with this, attention focuses on Santi Prego as Francesco Franco, still a military officer afraid of a falso passo, an error of judgement which will make him miss the opportunity the divisions in the country represent. He refuses to make a bid for power when he doesn’t believe he has popular support but, in the film’s most rousing scene, he has the monarchists’ flag rolled out on the front of the barracks causing the troops to spontaneously break out in the Spanish National Anthem.

Like the Juan Biadas version of  Franco in Balada triste de trompeta/Ballad for a Sad Trumpet/The Last Circus, the character is not rendered as a stock villain.  That part is given to blustering, war wounded Legion Commander Eduard Fernßndez who uses his wall eye to frighten children or drives past the column of his exhausted troops proclaiming “Viva la muerte”.

Meanwhile Prego draws inspiration from the depiction of El Cid in the fortress-Cathedral paintings and shrewdly moves to relieve the Siege of the Alcazar though it’s value is symbolic rather than tactical.

Dismissed by the new authorities, Elejalde is reinstated because Franco’s wife is an admirer of his work but he finds himself unable to save friends and sees his statements taken out of context to support the fascist cause.

Events come to a head in the University speech day when Elejalde is unable to stay mute and rises to deplore a divided Spain where the Basques and Catalans are vilified. Fernandez demands to speak but can only sputter when he takes the floor and falls back on blurting out “Espagna” which carries the day in a wave of fascist salutes and anthem singing.

This is a simplification of the production’s dense and complex argument – something which is possibly too elaborate for film form to carry. Elejalde’s Unamuno, the intellectual wavering between conflicting ideologies as history is made around him, is an intriguing match with Karel Hoger’s  Obcan Brych/Citizen Brych in the 1959 Otaka Vavra Czech film, though I suspect the comparison would horrify the makers of both.

There is no disputing that Mientras dure la guerra  is a work of high seriousness nor the excellence of its craft skills. It deserves to be treated as such. How it will fare so far from its intended audience is a matter of speculation. 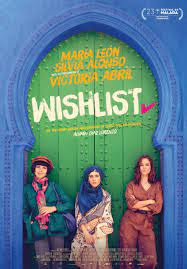 At the other extreme we get La lista de los deseos/Wishlist,  a Three Coins in the Fountain  for the Me Too generation - female buddies, fatal illness, scenery.

In Sevilla, Maria Leon is a vet with cats named De Niro and Pacino. Her equally glamorous friend Silvia Alonso moves in after her unworthy, shaven headed live-in lover of five years presents her with a case of contraceptive pills. A breast examination by Leon’s chum (wide eyed male spectator) reveals a lump which proves to be cancer. One of those alarming head shaving sequences follows. At the clinic they meet veteran patient, the indestructible Victoria Abril and, rather than mope about waiting for test results, the three women pile into a white camper van and head for Morocco with raunchy to do lists.

I’m not the target audience for this one. It’s all a bit treacly for my taste though it has its moments - the opening where Abril whips off her wig to reveal that chemo has left her bald or the sub-plot of the patrol cop’s daughter. Of course, even the orchestra is beautiful.

The event was full of substantial films. I’ve already used Sprocketed Sources (click on the link to get there) to enthuse about Iciar Bollain’s  La boda de Rosa/Rosa’s Wedding and the savage  Intemperie/Out in the Open with Luis Tozar in top form. Throw in presentable El asesino de los capricios/The Goya Murders and No Mataras/Cross the Line

... but what did they take on for an extended run subsequent to the festival at the Palace chain? Pablo Larrain's ridiculous Ema. Funny old world!