On Blu-ray - A FILM AHEAD OF ITS TIME REVISITED - Rod Bishop takes a new look at PUNISHMENT PARK (Peter Watkins, USA, 1971) 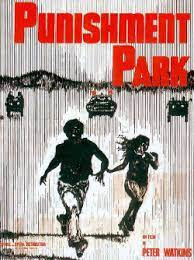 This year marks the 50th Anniversary of Punishment Park. Time to see how it holds up.

Produced for $95,000 on 16mm during a two-and-a-half-week shoot, it lasted just four days in a single cinema when released in New York City. Detractors labelled it ‘paranoid’, ‘futuristic nonsense’and ‘hysterical exploitation’.

For decades, the only way Americans could see the film was access to rare 16mm prints.

Peter Watkins, of course, was no stranger to this sort of resistance – The War Game(1965) graphically depicted a nuclear attack on Kent and was banned in the UK for 20 years.

Along with Culloden(1964), the British director had developed a remarkable style, sometimes referred to as ‘docu-drama’, sometimes as ‘pseudo-documentary’ and sometimes as‘staged documentary’.

Borrowing techniques from television news crews, Watkins created an impactful but artificial cinema verité, often with non-professional actors. He directed a number of films using this technique including the 1746 destruction of the Jacobite Uprising in Scotland by the British Army (Culloden); a nuclear attack on Britain (The War Game); and Punishment Park, a planned persecution of early 1970s political dissidents, hunted down in a Californian desert by armed and murderous National Guards and police.

But documentaries – pseudo or hybrid – they are not. They are fiction films made with simulated documentary techniques. This didn’t stop the Academy of Motion Picture Arts and Sciences awarding The War Game the Oscar for Best Documentary in 1966 – itself an indicator of the power of Watkins’ films to destabilize viewer judgement.

Punishment Park is set in a parallel universe. The Vietnam War has worsened and the 1950 McCarran Internal Security Act is triggered, giving President Nixon, without authorization from Congress, the power to detain any citizen deemed a threat to national security. 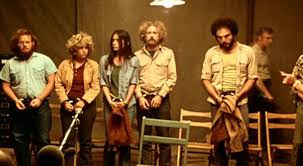 One group of dissidents, clearly modelled on The Chicago Eight, are bused into the desert and put on trial for their opposition to the Vietnam War by a panel of over-ripe political reactionaries, including a prosecutor behaving like Judge Hoffman, a housewife, a dentist, a trade union official and a Professor of Sociology.

The dissidents include a pacifist, a socially-conscious female singer-songwriter, a yippie, some communists, draft-dodgers, some counter-culture ‘figures’, feminists, anti-Vietnam War protesters and some black intellectuals, one of whom is gagged and tied to a chair (like Bobby Seale).

All are presumed guilty before trial and all receive sentences from 10 to 20 years in jail. Or they can submit to three days of torture in the desert.

Another group who has chosen the desert torture option over incarceration are forced to walk 53 miles through temperatures as high as 44 degrees Celsius to reach an American flag. They are given two hours head start before being chased down by armed police and the National Guard. If they fail, they must serve their jail sentences.

Half a century on, the ferocious Punishment Park feels anything but dated. Watkins’ mise-en-scène is as effective as any film made today and viewers in 2021 cannot escape thinking of events since the film was made - Guantánamo Bay, Abu Graib, Afghanistan, Chile, Iraq, Rodney King, the US Patriot Act, QAnon, Black Lives Matter and George Floyd to name a few.

In 1971, Watkins’ clear inspiration came from the Vietnam War era bashing of protestors at the 1968 Chicago Convention, the murders of Black Panther leaders, the murders of students by the National Guard at Kent State University and the criminal injustice foisted on The Chicago Eight.

The political polarization of today’s USA, across red and blue states, between left and right, between antifa and alt-right, between facts and lies, between news and fake news are all reflected and foretold in this remarkable work.

Some recent writers have suggested the magic realism of The Underground Railroad could be misread by Millennials who might believe the tracks and trains are historical truths.

If so, like the Academy of Motion Picture Arts and Sciences, they might also believe Punishment Park is yet another Peter Watkins ‘documentary’ rather than what it actually is – a brilliant fictional ‘alternative’ history now clearly distinguished by its desolate prescience.