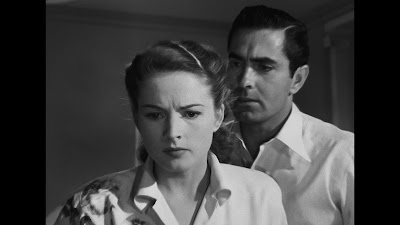 Stan (Ty Power), the future circus geek and his two women, the "good" Molly (Coleen Gray, above)) and the Sapphic, '"evil" Lilith (Helen Walker, below)). from Edmund Goulding's uber Noir, Nightmare Alley. Screenplay by Jules Furthman and photographed by the legendary Lee Garmes. 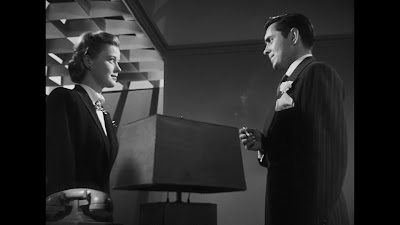 Criterion's new Blu-ray is a long delayed and long awaited Blu-ray release from a new Fox restoration. Criterion notes the new 4K scan was taken from a nitrate composite (third or fourth generation from the now lost nitrate OCN.) The materials were held by the Fox Holdings at UCLA and restoration work has been carried out by Cineric in New York.)
James Agee reviewed the picture for The Nation on November 8, 1947 and had this to say:
"In any mature movie context these days these scenes (of pseudo-religion with fake Temples and media personalities fronting the fakery) would be no better than all right, and an intelligently trashy level of all right, at that; but this kind of wit and meanness is so rare in movies today that I had the added special pleasure of thinking, "Oh, no, they won't have the guts to do that." But they do; as long as they have any nerve at all, they have quite a lot. The rest of the show is scarcely better than average. Lee Garmes camera work is lush but vigorous."
With the last two sentences Agee betrays his lost-in-the thirties- nostalgia for a non-existent socialist cinema of deep-and-meaningful social and moral worthiness, and his snide remarks on Garmes betray his pathological loathing of formalism at the expense of the sort of Hemingway-Huston male weepiedom he so yearned for, even within his own screenplays.
As always though, Agee hits a few nails on the head. One of them nowadays is the - to me- outrageous prevalence of born again religious lunacy that's polluting the current Anglosphere in the form of so-called prosperity faiths, and happy- clappiedom, the ubiquity of which now is frankly frightening. In fact I think no-one would dare make a picture today as tough and eviscerating as Furthman's adaptation of the novel by William Lindsay Gresham. The most recent movie excursion into this territory had to be Richard Brooks' 1960 Elmer Gantry adapted from the Sinclair Lewis novel about religious hustling and scamming.
The biggest shock in all of this is the role of veteran Edmund Goulding as director. His previous popular Fox hit with Tyrone Power was the successful but compromised (by Zanuck) adaptation of Maugham's The Razor's Edge, but the bulk of Goulding's career seems to rest upon a string of expert melodramas made across several decades of the studio system.
Nightmare Alley seems to me even more shocking today than it did when I first saw it back in the 70s. And the new 4K restoration is such fine quality it adds to the jolts the picture doesn't seem to stop hitting.
Posted by Film Alert 101 at 18:32