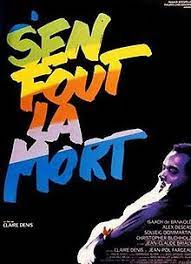 This is a rare Claire Denis film to find, being one of her earliest and least widely distributed. There are obvious comparisons to make between this effort and High Life (survival and madness in captivity, the almost anthropomorphic lurching of big machines that house the characters). But No Fear No Die's real sister film is Nenette et Boni. Although their focus is on the journey of two main characters, the core transformation is located in the characters' relationship with a kept animal/pet, and what their substitution of that animal at a critical point means about them. Here, the animal is a cock trained by Jocelyn and Dah, Beninian migrants to France. They join older Frenchman Pierre who, along with young wife Toni and his adult son, runs a restaurant in a food market and has hired the two to start up a cock-fighting betting racket on the floors beneath.

The story seems to collapse forward rapidly after the midpoint but this narrative style suits perfectly Denis' take on the impulsiveness/automaticity of trauma-induced thought. Denis has said in interviews that she was inspired to make this film after reading Frantz Fanon's Black Skin, White Masks, which "describes a special kind of neurosis--colonized people feeling psychologically defeated even though they are physically free to determine their future".

Questions for those who have seen the film: is Jocelyn's sexual attraction to Toni, and the desolation it strikes, manifestations of the grip of white colonial power on him as well as the corrosive sense of shame or hopelessness that this continuing grip provokes in him? I think it's hard to see the significance of the turning point of this film (the fall of the champion cock after Toni's tampering) without accepting this. The more difficult question is which came first -- Toni's influence or Jocelyn's vulnerability to her influence? 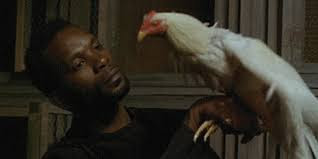 I have always admired the risks Denis takes in her storytelling (taboo themes, unconventional editing style), and this film certainly doesn't disappoint. There are visual rhymes in this film that are so direct, they can be hard to accept (Dah drops sugar cubes into Jocelyn's coffee cup with the same action he uses to feed the cocks; Jocelyn in a club swaying erratically with a woman as he does with the champion bird; the movement of Toni's neck and curly up-do mimicking the shape and movement of a cock's head).

Denis lends her story noir dimensions, at first for fun. There are men in trenchcoats, gritty and sparsely lit concrete expanses. The scene of Pierre's arrival in which we watch from behind a glass door as he approaches from his car through the cold bleak exterior looks as if straight out of Melville. We feel excited for Jocelyn and Dah when they discuss with anticipation the spoils of this particular partnership, but the pair's consignment to dank underground living quarters suggests the beginning of a confrontation with the dire material and hierarchical reality of their work conditions as African migrants. We feel as if the exciting potential of their adventure may have been cut short. 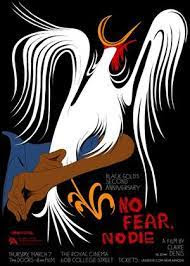