Over the years a few events stand out - the Paris Cinematheque's George Eastman House tribute in the sixties, the London NFT Viennese season, the 2000 Italian Film Week and the Tomu Uchida retro that the Melbourne Film Festival played. The 2017 Spanish Film festival is getting up there with those.  By way of normal film going David Cánovas first feature La punta del iceberg/The Tip of the Iceberg would be a welcome outing but here anything less than brilliant is a disappointment 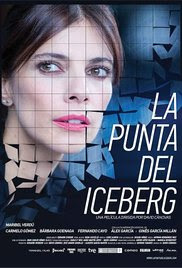 This gleaming Spanish corporate drama starts with a body dropping onto a car in a busy street to the consternation of passers-by, soon evoking parallels with the high suicide rate scandals at Orange France. Executive Maribel Verdú in business suit and six inch heels is flown in for a day to explore this third fatality in one of her communications company's regional facilities, though she says her area is balance sheets not human relations.
Security cameras scan all the public areas and a reporter keeps on trying to contact her. The branch has cut staff and increased output, putting out a record number of new prototypes, making its manager Fernando Cayo a valuable commodity and he puts the deaths down to personal faults in the late employees.
She talks to the latest victim's secretary, union organiser and old flame Carmello Gómez, the dead man’s replacement and the company coffee bar manager and puts together details of fifty two year old executives with children at university who would never find another job or one who had two women pregnant simultaneously. Rather confusingy she has visions of the victims dropping out of windows or one slicing his throat with a box cutter, along with seeing her sister in law whom she had had fired to win the approval of the board.
Finally Maribel's passed a computer stick by the neurotic secretary who takes her breaks on the roof, looking down the mesmerising drop to the court yard.

This all plays quite well but we might have hoped for a more inventive ending. Do all Spanish movie characters have relatives in intensive care? The final falling scarf image we saw in a Mrinal Sen drama.
Nice to find Verdu and Gómez still plausible star material sixteen years after their great appearance in Gonzalo Suarez’ El Portero/The  Goalkeeper. The pair joke about his expanding girth and, with her features having a hint of gaunt, Maribel has become a striking, mature beauty.
Posted by Film Alert 101 at 16:40