Back in the sixties the success of Leopoldo Torre Nilsson created an interest in Argentinian cinema. There was a season of current work which I sat through with some enthusiasm. I came out saying forget about Argentina. These films are about Australia and when I got to make a film myself many years later I included an idea from Fernando Ayala's PAULA CAPTIVE (1963) which was a perfect match with what I was doing. (It's on YouTube_here) 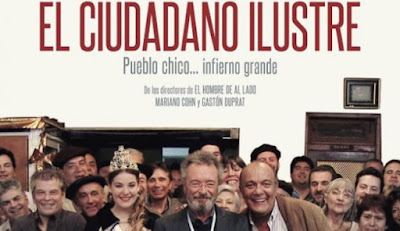 Well Gastón Duprat & Mariano Cohn's  El CIUDADANO ILUSTRE/The Distinguished Citizen in the current Spanish Film Festival goes over this ground one more time. Watching this, thinking of WAKE IN FRIGHT is inescapable.
However there is a lot more than hick comedy, brute hoons and desperate sex going on here.

We kick off with Oscar Martínez waiting in the Stockholm ante room till he’s called to receive his Nobel Prize for literature and he gives a speech where he says that he is driven by pride to accept an award that means his work is acceptable to famous men and kings rather than his intended audience - long pause before the hearty round of applause.
We pick him up again  in his Spanish home after three years writer’s block where he perversely rejects all the prestigious occasions he's been invited to in favor of a "distinguished citizen" award in his small Argentinian native town, commenting that the characters he drew on for his books' plots were unable to leave while he was unable to go back.
The tone is at first one of condensation. Arriving at the local airport he is greeted by a driver who is not the full quid and they walk past the waiting 4WDs to a battered van which breaks down in the middle of the six hour drive and proves to have no spare tire. After waiting overnight warmed only by burning pages from his sample books Martínez is met by apologetic Mayor Manuel Vicente who has lined up a series of events which move from comically awful to menacing.
He’s missed the local fire brigade’s reception so is driven through the town on the one hose truck, accompanied by the local beauty queen, waving to uninterested pedestrians. He speaks to a thin attendance after a video describing his life made by the local small station TV personality who does a one question interview before introducing the sponsor’s fruit drink in shot.
At his Q&A a young woman contradicts Martinez when he says that he never claimed  suffering was essential to creation. She gets to be naked on his bead eating pizza.
His old mate Dady Brieva has married Martinez' former flame. The writer goes to dinner where the Brievas serve up whole roast sheep heads. The situation gets to be more complicated. The men adjourn to the local club where Brieva has had all the girls thirty times each and he does the crazy-move dance to the juke box.They are accompanied by the hunting buddy whose only dialogue is his scary wild hog noises. Brieva gets into an argument and is next seen bloody.
Martinez has been roped in to judge the local art exhibition and they are confronted with crudely drawn likenesses of pets, a portrait of the Pope and a badly executed rural scene which the men decide to give the award because it’s painted on the back on an advt. hoarding - hang it so both sides are visible. The creator of a dim still life, who proves to be biggest nutter in the town, denounces them for denigrating the progressive work of local artists - like him. He turns aggro disrupting Martinez' sparsely attended lectures and a couple of his hoon associates follow the visitor in a rally car as he walks, only to be shown off by Brieva.
After a violent confrontation, Martinez finds himself trying to escape from the town where there are no taxis.
There's a coda which puts in question what we have seen.
The key element is Martinez' description of vanity as a key element of the writing process. Our estimate of the central character changes constantly as we see him in contradictory situations - with his old flame, meeting a bolas swinging gaucho, relating to the young hotel clerk short story writer or dismissing the local who is sure his dad was one of the Martinez' characters. His contempt of the small town doesn't stop him pressing a dandelion from his parents' neglected grave in his note book.
The film form is basic though there are a few effective attempts at style - the montage of people met in the streets - but it’s strengths are a great set of performances and it's ability to keep on changing our take on the creative process - not going home again, arrogance as a source of inspiration. This one is a complex, unfamiliar and superior piece of work when it's not being viciously funny.
We can only regret that we haven't had a chance to see the more of its makers' other films.
Posted by Film Alert 101 at 04:52