The Spanish Film Festival hits keep on coming and Rodrigo Sorogoyen's Madrid ultra-violence thriller Que Dios nos perdone/May God Save Us proves one of the all-time best things of its kind. 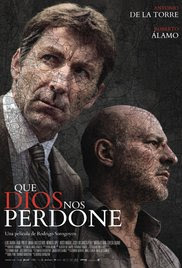 The cops have to deal with the 15M anti-austerity movement demonstrators and a visit by Pope Benedict XIII, so some of their less than finest put a granny killing down to robbery until stuttering Inspector Antonio de la Torre lies down in the position of the body on the apartment stairs and deduces rape. Shaven headed partner Roberto Álamo (who carried off a Goya for his macho family man role) gets into a punch up with one of the blundering officers.

We get the first of scenes in the morgue with naked old woman cadaver where de la Torre’s guess is verified. A second killing and digging through the files to find an earlier case, which was never investigated, ups the pressure. Their supervisor takes the boys to lunch and explains that with Pope’s visit granny raping can’t be going on but the young profiler who enjoys his work comes up with the notion of a well-groomed thirtyish serial killer with mummy issues who is kind to animals.  Álamo is dismissive till De La Torre points out that they know the killer left milk for a stray cat in the victim’s flat.

Set piece scene of de la Torre spotting profile fitting Javier Pereira distant feeding a kitten and following him to the flat where he’s got another old woman to bring him a glass of water.

There's a chase mixing in the festival crowd which is trapped in a Metro station when the pair, using their police authority and a shot in the air, lock it down. The chief ends facing hundreds of complaints from the embassies of roughed up visitors and fires Álamo because he’s got a wife and two kids to keep him stable, putting de la Torre on audio tape surveillance work, not wanting him offing himself.

Actually De la Torre and his cleaning lady are getting it on after she comes to his flat with a jug of gazpacho, while Álamo brings his daughter back to the family home to finds his wife making a meal for a shirtless man. He ends bloodied and drunk burying his dog in the apartment block lawn.

It's three years later and the figure seen through the misted window advancing on the bearded repair man's truck in the rain proves to be de la Torre.

Shot in unsteady hand held, with a superior suspense building score, the film has vivid characters, convincing settings, a deep vein of ugly perversity and a succession of grabbing set pieces - the festival crowd and subway escape, rounding up the suspect’s brother by the flickering cellar minuterie light, the fight in the crime scene and escape and the final scene.

For something that is the currently most ambitious undertaking of a beginner director, this startlingly effective. Lead Antonio de la Torre seems to be a specialist in these turning up in Raúl Arévalo's also impressive Tarde para la ira/The Fury of a Patient Man which I wrote about here. I wouldn't take your granny to that one either.
Posted by Film Alert 101 at 01:04