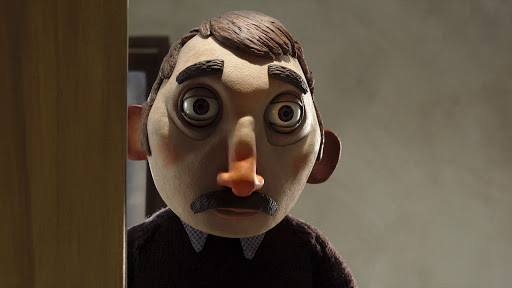 11.05 am SBS Movies Ma Vie De Courgette/My Life as a Zucchini (Claude Barras, France, 2016). These notes following are lifted from a review by David Hare which was republished in an E-book. Click on this link for details. Two lost children and a lost father coming together through the grace of this wonderful, exquisitely made, profoundly moving, stop frame animation film from Swiss director Claude Barras. Amongst other things Barras studied graphics at the École Emile Cohl in France during his tenure and the scrupulously achieved, direct and unsentimental uncluttered work of Cohl, the creator of what we know these days as the animated film is deftly translated down a century plus of movie history to make a stunning artistic debut in this small (66 minutes) masterpiece from 2016.

The screenplay was written by Celine Sciamma who seems to have been completely tuned into Barras' vision. This is a distinguished addition to her own filmography which includes Girlhood (2013),Bande de Filles(2016) and the screenplay for Téchiné's big return to form this year, Quand on a 17 ans. Since then Sciamma has had a worldwide arthouse hit with her film Portrait of a Lady on Fire.

7.00 pm 9GEM El Dorado (Howard Hawks, USA, 1967) The second in Hawks late career trilogy of westerns. Wayne and Mitchum have to cope with old age and the drink. The young James Caan does a variation of the Ricky Nelson part from Rio Bravo.

9.35 pm 9GEM Guns of the Magnificent Seven (Paul Wendkos, USA, 1969). None of the original cast fronted for this one.