The animated programs are frequently the high point in film festivals, so finding Melbourne was streaming their’s free was a suitable come on. They didn’t disappoint. 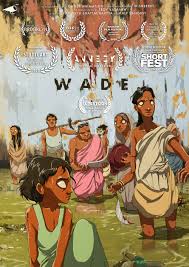 Interestingly the best films were the most traditional. Kalp Sanghvi & Upamanyu Bhattacharyya’s Wade  (India, 2019) was a conventionally drawn narrative film but the makers knew how to deploy their technique with maximum effect.

Rising ocean levels have filled  Kolkata (Calcutta in the old money) with sea water carrying rubbish and scavenging crows. The Taj Mahal is an island and graffiti proclaims “Save Kolkata from climate change refugees.” One group of these is towing a plastic bottle raft with a blind girl on it when they are confronted by a pack of  savage Bengal Tigers.  The girl has a knife and one of the tigers gives birth ...

The directors, with a background in title sequences, have made the golden tigers wading in the kaki water an image that is both alarming and beautiful giving the film more tension and shock value than anything eleven minutes long deserves. 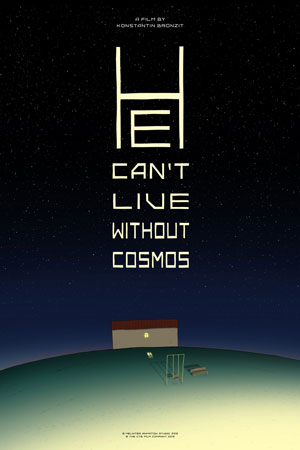 Also batting above team average was Konstantin Bronzit’s Russian On ne mozhet zhit bez kosmosa / He Can't Live Without Cosmos  (Russia, 2019) companion piece to his Oscar nominated We Can’t Live Without Cosmos   again using traditional drawn animation but with a style closer to children’s picture book ilustration than multiplex toons. We follow a child born aparently in a space suit, taken by his attentive mother to live in an isolated house on a hill it shares with a swing. An attempt at violin training doesn’t wotk out and sledding with neighbour kids brings on the flu. The hint of a back story with an astronaut dad and cuts to the space station assembly along with the scarf wrap all come together in narrative that’s stronger than we usually get with these.

The film is clever and quite haunting.

The rest were less conventional and less involving, by and large the work of people for whom ideology rated higher than audience. 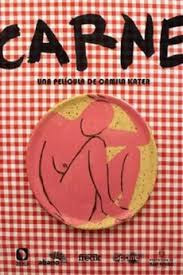 Park Jee-youn’s South Korean Ghosts  is a black and white wash affair. A man and a woman appear from a vagina which doubles as an eye lid and make out on a bed surounded by water while tiny synchronised swimmers advance, mixed in with with a fish & a crow which eats one of the swimmers. The female examines the hole in the head of her swim goggles wearing partner and then goes dark. What if anything it imagines it is telling us remains obscure but the imagery is sufficiently unfamiliar to hold attention at nine minutes. 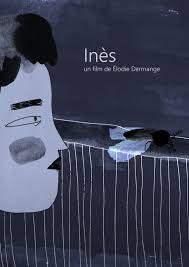 Also monochrome is Elodie Dermange’s Swiss  Inès  with the central pregnant woman character harassed by a phone call from her mother and a bug that hits her light bulb and which she traps under a tumbler, triggering her dream of a squad of pram pushing mums. She lets the bug go and re-assures her lover (?) when he arrives. Simple black and white wash again.

Sverre Fredriksen’s  Human Nature puppets populate a dairy with inflatable women with huge mameries. An infant is frightened by knocking over a bin, with rats in suits laughing at their smart phone pic. of the incident, a man throwing up plastic as he comes out of the sea resembles the ones swimming in the tank in the restaurant where fish eat (think Monte Python) - and more, an ugly and occasionally disturbing eco comment short.

The Australian entry George Metaxas`Mother Bunker shows the piston face robot with the bric a brac dressing room getting itself up as a drag queen to perform a number using severed human heads for a robot audience, before one ventures out into the ruins of human civilisation weapon at the ready. Like most of these it’s polished and not a little disconcerting. 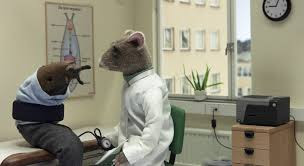 Niki Lindroth von Bahr’s Något att minnas/Something to Remember  (above) from Sweden is more surrealism  - “Six moments” in the future, human clothed bird mother & child stand and sing to empty cages , more bird men in a bedding show room, a mole and a snail record, a catapiller and a mouse are at an Edward Hopper night time petrol station and humanoid insects, with one already fallen, join in. Superior craft skills. To ask what it means would be impudent.

Kapaemahu a Hawaiian cartoon from Hinaleimoana Wong-Kalu, Dean Hamer and Joe Wilson is a handsome ethno animation short drawn in the style of Islander art. Legend tells that ages ago four imposing hermaphodite spirits came from Tahiti to Hawaii. Treasured for their miracle cures they dragged four huge stones to Waikiki beach. With the arrival of U.S. missionaries the story was forgotten and the stones became the site of a bowling alley but after 700 years new research has revived the story. Smoothly executed & narrated in an ancient Hawaiian dialect, this is one of the event’s most approachable pieces. 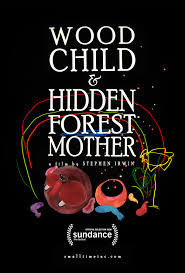 Britain’s Stephen Irwin has had considerable success on the Festival Circuit. His Wood Child and Hidden Forest Mother  has a largely inexplicable plot where a grossly macho hunter is shooting all the forest creatures till he pots an elf which sends a rainbow to burn down his house and give him breasts for the critters to suckle at. Koala bears prominent. It’s grim and deliberately crude.

Lots of female anatomy in this selection and no funny talking animals. From here there’s no way of telling whether that’s the taste of the programmer or it’s what they are drawing this year. Someone some place along the line has put a lot of effort into getting this diversity. The range of imagery and short running times makes the program an interesting enough watch but I was sitting there missing the Tournées d’animation which I used to enjoy so much. Bring back cinéastes, Ozamu Tezuka and Phil Mulloy!

As far as the presentation goes, there’s no doubt that this intensely visual material loses without the big screen and an audience but taking the films one by one does offer a chance for reflection, even a quick spot of research which gives them individuality that’s hard to achieve in the deluge of theatrical screenings.