NAKED AS NATURE INTENDED.
My sister-in-law headed the Paris branch of a large American college, and occasionally asked me to help with the social heavy lifting when alumni groups visited. With some it was harder than with others. Facing twenty retired graduates and their wives regarding suspiciously the Michelin-starred restaurant’s amuse bouche of pigeon liver confit on brioche (“Howda ya eat this anyway?”), they seemed unlikely to enjoy stories of the establishment’s early history as a bordello.

Something was needed to break the ice. Fortunately, I recognised a lady in the group. My sister-in-law confirmed she was indeed a Mrs. Hart, though the name didn’t ring the bells it did for me. In imagination, I still saw her, a lissom twenty-four-year old, posed in photogenic rags on Hollywood’s version of a desert island while a regiment of showgirls waved ostrich feather fans in imitation of the surf.

Rising to greet the guests, I told them how glad I was to confirm something that had tantalised me for decades. Watching Mitchell Leisen’s Murder at the Vanities on Australian TV, I’d noted the sign over the stage door entrance to Earl Carroll’s theatre claiming that “Through These Portals Pass the Most Beautiful Women in the World.” At last, I told the group, I could confirm that this was true, since the still-beautiful star of Murder at the Vanities was among us.

Kitty Carlisle Hart responded like a trouper to this barefaced lie, and invited me to sit with her throughout the meal - probably to avoid having to eat it. Instead, she beguiled me with gossip about her brief Hollywood career, her marriage to author/producer Moss Hart, her subsequent appearances on TV, radio and the stage, as well as her friendship with, it seemed, every showbiz luminary of the century. A year later, in her vast apartment on Manhattan’s upper east side, she led me through a collection of paintings executed by some of these people. Graphic art clearly lost nothing when Cole Porter, George Gershwin, Harpo Marx and Noel Coward chose different professions.

Mme Hart’s film career, culminating in a stint as the Marx Brothers’ foil in A Night at the Opera,was entirely consistent with the remaining cast of Murder at the Vanities. That one of its most recognizable names today, excepting that of bandleader Duke Ellington, is giggling blonde showgirl Toby Wing tells us something about the rest. Danish male lead Carl Brisson faded after a handful of roles. Gertrude Michael’s sultry torch-song voice came with a sullen manner that, along with her alcoholism, condemned her to roles as a bitch, that in Vanities being the best.

Among non-singers, Victor McLaglen as a blustering cop and Jack Oakie as the harassed stage manager hog the limelight, edging out Charles Middleton, who would shortly trade in this film’s white spangled tail-coat for the no less gaudy outfit of Ming the Merciless in Flash Gordon. For connoisseurs of celebrity cameos, director Mitchell Leisen can be glimpsed as the pit-band conductor. Also in the chorus are Alan Ladd, Denis O’Keeffe, Anne Sheridan and Lucille Ball, though anyone who spots them has better eyes than mine.

It’s by decor and ensembles that such shows stand or fall, and those for Vanities are impressive. As Dick Powell sang for Paramount’s down-market competitor, Warner Brothers, “What do we go for?/ Go see a show for?/ Tell the truth-you go to see/ Those beautiful dames.” Earl Carroll, whose stage spectacles earned him the title “The Troubadour of the Nude,” boasted that the women in his trademark “Curtain of Girls” were both more numerous and more naked than those of rivals Florenz Ziegfield and George White. 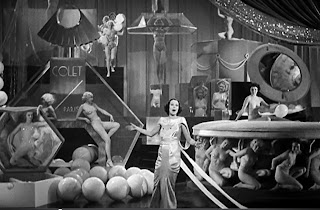 Murder at the Vanities confirms this claim as accurately as the censor, even in those pre-Code days, would allow. In particular, the Human Powder Box number (right) features a succession of art deco perfume bottles, nude-festooned, and powder boxes that open on mirrored interiors reflecting near-naked girls inside.

Nothing, however, earned as much notoriety as Sweet Marijuana, crooned by Gertrude Michael with a group of guitar-playing Mexicans in sombreros and serapes. (Kitty Carlisle insisted she’d never heard of marijuana when they recorded the number, and believed it was a Mexican musical instrument. It’s unlikely Gertrude Michael was so innocent.) Why Mexicans, you ask? This is explained when a backdrop of cactuses produces a crop of giant cactus flowers, nestled inside each of which is a topless girl. At the climax of the number, one girl screams, since blood is dripping onto her breast from a murdered woman in the flies.

Leisen, who began as costume designer for Cecil B. DeMille, had an exceptional eye for design, but because of his bisexuality frequently clashed with such directors as Billy Wilder, who derided him as “a window-dresser.” Hollywood gossip asserts that Leisen managed the very private parties CB threw at his Paradise Ranch. That male guests were issued at the door with loose satin tunics of the kind worn in their lighter moments by Russian grand dukes suggests a refined sense of style. (Dress for ladies was more casual, and, indeed, optional.) Not so much Pre-Code as no Code at all.

Editor's Notes: For some other recent thoughts on Mitchell Leisen by David Hare click here .
A copy of Murder at the Vanities is streaming on OK.ru if you click here