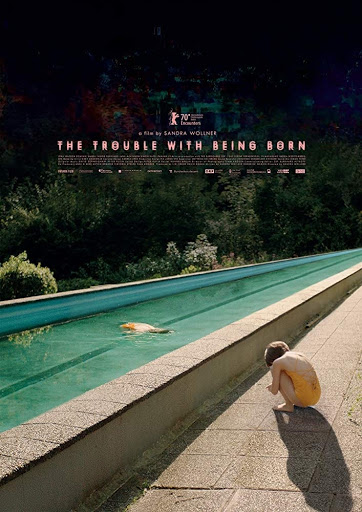 Below is a story written by Karl Quinn, senior culture writer at The Age and Sydney Morning Herald, about the Austrian film The Trouble With Being Born, which was due to screen at the Melbourne International Film Festival this month. The story was never published, however, because events took a very different turn, as readers of this blog will be aware, when MIFF pulled the film on the eve of the festival in response to comments by two forensic psychologists quoted by Quinn.

Both Quinn and The Age have come in for criticism from contributors Tom Ryan and David Stratton on this blog over what they have intimated was a "beat-up".

Here Quinn defends his reporting, and offers some background on what unfolded between filing the original story below and the story that eventually did run, some days later.

This story begins a couple of weeks before MIFF opened, when Jake Wilson filed a short review for Spectrum, The Age's weekend culture section, in which he described The Trouble With Being Born as a "detached yet outrageous ... provocation" whose subject matter "is exploitation and specifically paedophilia". Wilson added that the film was "almost enough to make you glad MIFF isn’t running as usual this year. Under any circumstances it’s a uniquely uncomfortable experience, but it would be even tougher to get through in a crowded cinema."

Given that, it was almost inevitable the news desk would want a story, and I was asked to provide one. So I watched the film, found it unsettling and fascinating in equal measure, interviewed director Sandra Wollner over Skype, and wrote - for the news pages, with the likelihood of some controversy clearly flagged - the story you see below.

But that story didn't run. After I filed it an editor asked me to seek and add to it the views of someone expert in the area of sex offences against children. Given the subject matter and the images in the film, that hardly seemed an unreasonable request.

I received responses from three forensic psychologists, two of whom I quoted. All three had serious issues with the film. I fed these responses into the original story, while retaining as much as possible of Wollner's explanation of her intentions. But given the strength of the psychologists' responses, I thought it only fair to share them with MIFF before publication, in case the festival wished to respond.

A few hours later MIFF did respond - by pulling the film.

At that point the story became something else entirely, which is what I reported and what we ultimately published.

Far from a "beat-up", the story arose because I sought multiple viewpoints, and gave MIFF the right of reply. I stand unreservedly behind that, as I do my subsequent report of the criticisms of MIFF by Ryan and Stratton. I concede I did not report their criticisms of my initial report in this second report because it simply seemed too solipsistic to do so.

Regardless of the rights and wrongs of MIFF pulling the film, the fact the festival was online this year was deemed a critical factor, both in the issues identified by the psychologists and the decision made by MIFF. But that point could easily be missed in the responses of Ryan and Stratton published on this site.

Also missed in some of the responses - though not in my reporting - is that while MIFF dumped a film that had been "approved" by the censor, that approval was granted in the form of a general exemption, not a specific assessment of the film in question. MIFF insists that detailed descriptions of The Trouble With Being Born were provided to the Classification Board, as required, and one might argue that those descriptions should have been enough to suggest that this particular film ought to be assessed on its own merits.

One psychologist - responding to my detailed but neutral descriptions of scenes in the film (which she declined to view) - asserted that they likely constituted Child Exploitation Material.

Personally, I think this is unlikely, but I'm no expert. But if she is correct, screening that material - let alone distributing it over the internet - would be a criminal offence in this country.

Had the Classification Board asked to view the film, that matter could have been definitively settled. The fact that no one at the Board did so ultimately left MIFF in the unenviable position of having to play censor to its own programming.

A film in which an android child has sex with its human "father" is destined to be one of the most controversial offerings at this year's Melbourne International Film Festival.

The Trouble With Being Born, from Austrian director Sandra Wollner, arrives at the digital-only MIFF 68 ½ following its debut in February at the Berlin Film Festival, where it received a Special Jury Award in the Encounters section dedicated to more daring works.

Al Cossar, artistic director of MIFF, is unapologetic about its inclusion in the festival's line-up. "The content is certainly confronting, however we do not see it as an empty provocation, but a film that transcends troubling subject matter with substance, craft and voice," he says. "We also hope that any response to the film from audiences – positive or negative – comes from a place that is informed, that people respond to what the film actually is, rather than an idea of what they have in their minds, which may not be reflective of the reality of it."

The relationship between Papa (Dominik Warta) and Elli (the pseudonymous Lena Watson) is inappropriate purely by implication rather than overtly pornographic, though it is almost impossible to miss.

Director Wollner says she knows her film is "strange, weird", and is likely to prompt some strong reactions. But she has been surprised by the personal nature of some attacks – invariably from people who have not seen it.

"We've had some strange responses from the alt.right, saying it's 'praising paedophilia', which is obviously not what's going on there," she says. "Some people have been really angry that I, as a potential mother – I'm not yet – could make this. 'You're able to give birth to children, how could you give birth to something like that?'"

Wollner says she had initially wanted to make an "anti-Pinocchio" film that defied the trope of an artificially intelligent being wanting to become human. It would be a way of exploring what it is that actually makes us human – if not 'memories', which AI can replicate to an astonishing degree of accuracy, then what?

"It's the God question, in a way. Memory is just a very specific way to look at it," she says.

It was her co-writer, Roderick Warich, who first came up with the idea of a sexual relationship between a man and an android "child", but it immediately struck a chord with Wollner.

"I had stumbled upon pictures from a Japanese company selling sex dolls of little kids and pre-teens, that are really life-like, really realistic, and this shocked me," she says. "But it's a doll, it's an object, so where do we draw the line?"

She wasn't interested in making a film about her moral repugnance, though, and she didn't know how to answer the question of what impact such things have – "does it do any good, by letting people live their sexual fantasies with an object, or is it triggering something?"

Rather, she says, "I was more interested in doing a film about the fact this exists ... to see the AI as the mirror of the human soul, of the darkest abyss of the uncanny valley, where there's no light. So I needed to go down this path."

Anyone unconvinced that "this exists" need only look to the fact that last week anti-pornography campaign group Collective Shout pressured Alibaba into removing all listings for "child sex abuse dolls", after attacking the online retail hub for profiting "from normalising the abuse of infants by facilitating users' fantasies of raping a child".

But what of the real child actor who plays Elli? No matter what the intellectual justifications for the film, does it not raise serious duty-of-care issues?

Absolutely, says Wollner, which is why the then-10-year-old was given a false name, wigs, and a heavy silicon mask, applied fresh each day, to hide her identity. "You would not recognise her if you saw her in the street," she says.

The script was shared in advance with the girl's parents, "the nicest family I have ever met". A psychologist with expertise in child sexual trauma guided Wollner through the language she should use in explaining situations to Lena; the child was talked through the subject matter in "child-appropriate ways"; and nude scenes were filmed with her in a flesh-toned bathing suit, which was digitally removed in post-production.

"These matters are always scary," says Wollner. "It's very important how you work with the kids."

One challenge that has so far been insurmountable, however, is that Lena is too young to watch the film. "I think it's weirder for her that she cannot show and see what she did."

Ultimately, of course, Wollner cannot know for certain that Lena's involvement in the film will prove benign.

"I've thought about it a lot, what's it going to be like when she discovers her own sexuality, will it do something to that," she says. "Working with kids you always force, in a way, something on them, but we did our best [to be] transparent.

"She comes from such a healthy environment, and knows it's just a game, that I don't think there will be any trauma."

Email ThisBlogThis!Share to TwitterShare to FacebookShare to Pinterest
Labels: Censorship, Karl Quinn, MIFF, Sandra Wollner, The Trouble with being Born