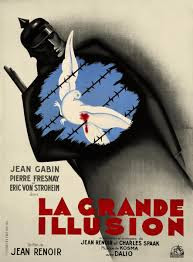 Jean Renoir’s 1937 masterpiece La Grande Illusion is having a single screening at the Randwick Ritz on Monday 31 August at 7.15 pm. Book tickets by clicking here

An eternal favourite of many, La Grande Illusion  is one of the peaks of Renoir’s career. The Ritz is presenting a beautiful digital restoration that shows off the film to its best.

Here is a sample of some, from the archives, critical opinion about Renoir and the film.

“My judgment that Jean Renoir is the greatest film-maker in the world is not based on a public opinion poll but purely on my own feelings. It’s a feeling, I might add, that is shared by many other filmmakers. And after all, Renoir is the quintessential moviemaker of the personal.

“La Grande Illusion…is built on the idea that world is divided horizontally by similarities, not vertically by frontiers…(it) is a film precisely about chivalry…The great illusion was to believe that the 1914-18 war would be the last. Renoir seems to consider war as a natural scourge that has its own beauties, like storms or fire. It was a matter of waging war politely as Pierre Fresnay does in the film. For Renoir, the idea of the frontier must be abolished in order to destroy the spirit of Babel, to reconcile men who will always, nevertheless, be separated by birth.” François Truffaut

“How has Grand Illusion held up over the years? It is not enough to say that it has retained its power. Not only has the stature of the film remained undiminished by the passage of time (except in a few minor details), but the innovation, the audacity, and, for want of a better word, the modernity of the direction have acquired and even greater impact.”  André Bazin

“his most popular film…an extraordinary achievement. In many ways it is Renoir’s most effective film and also his most accessible…in spite of the elevated nature of the subject matter, Renoir indulged his penchant for the grotesque and for the breathtaking mixture of genres – taking us suddenly from the ridiculous to the sublime.”  Richard Roud