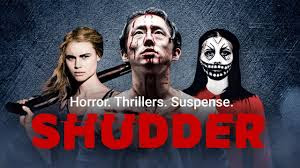 With the launch of Shudder in Australia, some may be wondering whether Australian wallets can handle yet another streaming service in an increasingly crowded marketplace. Unlike most others, and as the name suggests, Shudder is dedicating itself to horror, thrillers and genre cinema exclusively and they’ve got a few exclusives of note to try and get you to part with $6.99/month (you get the first seven days free as a trial).

Let’s start with the biggest offering that can’t be found elsewhere on Stan, Netflix, Prime Video or Disney Plus.

The near four-and-a-half-hour documentary In Search of Darkness started its life as a Kickstarter project with the aim of being the “definitive 80s horror doc” and backers pledged just under £100,000 to see it come to fruition.

I guess if you’re a Universal Monsters fan the 1930s would represent the “greatest” decade for American horror but the 1970s is a strong contender for the title: The Texas Chainsaw Massacre, Jaws, The Exorcist, Carrie, Halloween, Dawn of the Dead and Alien to name a few.

But what about the 1980s? If you were a horror fan it was a pretty glorious decade to feast: The Shining, Re-Animator,Texas Chainsaw Massacre 2, A Nightmare on Elm Street and the follow-ups, the Friday the 13th movies, The Thing, They Live, Day of the Dead, Night of the Creeps, Hellraiser, The Evil Dead (and its sequel), Videodrome, Aliens, Henry: Portrait of a Serial Killer, Predator, Sleepaway Camp, The Howling, The Beyond, Maniac Cop, Child’s Play, The Fly and on and on. While the 1970s probably had the established classics, my own taste veers towards the 1980s and the excess and playfulness filmmakers had with the genre. 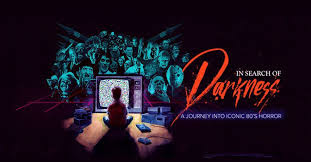 So if you’re a fan with an uncomplicated love of the period and its films, you’re going to have a lot of fun with In Search of Darkness. Most of the “iconic” films of the decade are covered and there are plenty of interviews with the icons (both behind and in front of the camera) of the period such as John Carpenter, Joe Dante, Larry Cohen, Tom Holland, Stuart Gordon, Brian Yuzna, Barbara Crampton, Doug Bradley and Nick Castle. There’s a few great anecdotes and one-liners from the filmmakers (Joe Dante especially) and it’s highly unlikely you’ll finish and not want to revisit at least some of the era’s best to savour the g(l)ory days.

The documentary covers the films year-by-year with a few detours to focus on themes or trends, and it’s all presented stylishly with a generous array of clips and a suitable retro soundtrack. It might be over four hours but it’s easy to lose track of the time as the documentary glides through the years treating the films with near equal love and attention. This is a point that is bound to frustrate some and delight others: does a movie like Chopping Mall or Nightmare on Elm Street 3really deserve as much attention as They Live, Videodrome or Re-Animator? Chopping Mall is going to be “iconic” for a small subsection of genre fans but it isn’t The Evil Dead iconic.

It might be touted as the “definitive 80s horror doc” but it’s really a largely American 80s horror documentary. There’s no real mention of anything outside of the North American region but curiously Ken Russell’s The Lair of the White Worm is covered (which is a British film). But this was an era that gave us Mr Vampire, Tetsuo, Demons, The Beyond, The House by the Cemetery, Cannibal Holocaust andTenebrae, all of which I would argue are as “iconic” as White Worm. Australia even produced horror which was worthy of coverage as much as Chopping Mall - Roadgames, Razorback and Next of Kin come to mind.

The “horror influencers” they assemble to provide commentary are a mixed-bag and it could have been significantly improved by getting critics, authors or scholars to provide a bit more insight and substance to the political and social context happening in the 1980s.  Reaganism, computer technology and MTV are somewhat discussed but there’s no real exploration of the AIDS epidemic. With no real disrespect to the lead singer of metal band Slipknot, but was there no one else available to add a bit of detailed commentary to the movies being discussed from the critical community?

There comes a point where you’re left to ponder what has been the legacy of this particular decade (as opposed to the 1970s) on the years that followed, and the film never really comes to grips with this. We’re being told for 4 hours of the greatness of everything from Fade to Black to The Stepfather 2but what has been the real legacy of Carpenter, Stuart Gordon, Cronenberg et al on those who followed? Was the real legacy of 1980s horror that studios worked out milking franchises for all they’re worth was the way to go (Halloween movies are still going and a Child’s Play series is in the works)? Of the main filmmakers covered, Cronenberg’s career has gone on in all kinds of brilliant and disturbing pathways; Sam Raimi made the bridge between horror and mainstream entertainment with Darkman and has had an intriguing career ever since; the master John Carpenter made a few decent post-80s titles but nothing to match the glory days; Wes Craven found success with Screamand not much else worth mentioning; Joe Dante made the classic Matinee in the 1990s and little else to match that since; and Tobe Hooper made a pretty fun TV movie with John Carpenter in the early 90s (Body Bags) but that’s pretty much it.

One last quibble: the fact that The Burbs warrants mention but James Cameron’s Aliens does not is baffling. Although the Alien (at least the first two) movies have tended to merge both science fiction and horror it’s as much a “horror” movie as The Burbsor Gremlins. And while we’re there wouldn’t Ghostbusters andPredator both be worthy candidates as iconic “horror” of the period? Neither has the goriness of Re-Animator or Hellraiser but they both blend action and horror genres as much as They Livedid.

If you’ve got a stack of Fangoria magazines piled up somewhere alongside a Tom Savini action figure (guilty as charged for both) then you can’t help but admire the love and dedication that has gone into this project. Many will argue that it’s little more than a “fanboy” highlights reel (it is) and it can be exhausting and superficial, two adjectives those who can’t stand horror would use to describe many of the films covered, but there’s enough here for even casual horror fans to enjoy.

After watching In Search of Darkness you might be hoping to see many of the titles mentioned on Shudder but alas there’s still pretty slim pickings of the classics (you’ll still find Maniac Cop, Hellraiser and Maniac). Of the more contemporary genre films you’ll find High Tension, Goodnight Mommy, 3 Extremes, Dumplings, Timecrimes, Sightseers, It Follows, Let the Right One In, Trivisa, 31, Re:Born, One Cut of the Deadened Antiviral to name a few. It’s not an extensive library but you’ve got to imagine it will only grow from here. 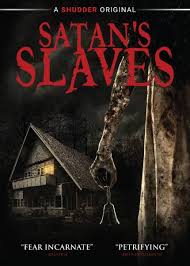 A few exclusives worth mentioning. One of Asia’s most exciting filmmakers Joko Anwar has two Shudder exclusives, Impetigore  and Satan’s Slaves, the former a stylishly mounted ghost story with Javanese-tinged mythology, the latter a jump-scare heavy remake of the 1980s thriller. Both are testament to superb technical craftsmanship and while neither are particularly “scary” (what is though?), they’re both clever, moody and compulsively watchable. Shudder would do well to keep snatching up Joko Anwar exclusives as he’s destined to emerge as one of the region’s most prominent (genre) filmmakers in years to come.

Anthology films never really work and the 1982 George Romero horror Creepshow was no exception but on balance it has a helluva lot of pluses: good humour, Tom Savini special effects and a suitable comic book aesthetic and tone. Written by Stephen King, the shorts don’t go for the gorehound’s throat but instead replicate the experience of leafing through a well-worn 1950s EC comic. Fast forward nearly 40 years and Shudder has now released a Creepshow web streaming series with FX wizard Greg Nicotero producing (and occasionally directing).

Each of the six episodes is divided into two shorts, and only the first episode’s first part has a story by Stephen King. Maybe predictably, that segment, Gray Matter, also happens to be the strongest of the 12 shorts. The rest are a mixed bag but Bad Wolf Down starring Jeffrey Combs (Re-Animator, From Beyond) is a pretty good Nazi werewolf tale and the funny Skincrawlers about a miracle weight loss program going wrong seems not too far from where we’re heading with diet fads. Also worth noting Tom Savini directs the final segment, By the Silver Water of Lake Champlain, a sort of Loch Ness tale set in the 1980s.

Anything else worth noting about the Shudder lineup right now? Jeff Lieberman’s 70s LSD shocker Blue Sunshine is on there, Horror Noire which delves into the history of African-Americans in horror, the documentary Lost Soul about Richard Stanley’s experiences on The Island of Dr. Moreau and the 6-part series James Cameron’s Story of Science Fiction.

There might not be enough to warrant purchasing a whole year’s worth of streaming but there’s certainly a few months’ worth of genre content available. The harder question might be even though we’re at home now more than ever with all the latest Blu-rays, Netflix, Stan and Prime Video titles already out there, will casual horror fans be willing to part with their cash right now for such a limited library?